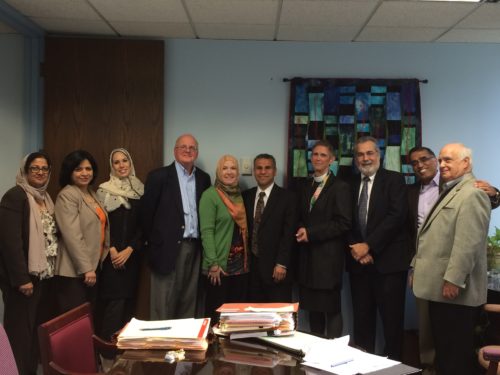 The building was vacated after the congregation voted in 2012 to dissolve as a parish and close by the end of that year.

The following spring, Bishop Ian T. Douglas and other ECCT staff hosted a meeting of community leaders and interested residents to discern how the property could best be used “as an asset to God’s mission of restoration and reconciliation” in greater Avon and beyond.

At the meeting they learned that the local Muslim community needed a place to gather for prayers, teaching, youth programs and interfaith work. In September 2013, the ECCT entered into an interfaith partnership with FVAMC that included leasing the Avon building.

Since then the FVAMC has reached out to its neighbors with open houses and other interfaith efforts, expanded its worship and service work, and grown its programs, particularly for youth.

The several committees of the ECCT needed to approve the sale gave it their solid endorsement and support.

Both ECCT and the FVAMC share the understanding that the sale isn’t the end of their relationship but the beginning of a new phase in this interfaith collaboration.

Douglas said of the growing relationship between the Episcopal Church in Connecticut and the Farmington Valley American Muslim Center: “I thank God that through the stewardship of our property in Avon we have come into relationship with our Muslim neighbors in the Farmington valley. Together we are learning about what it means to be people of faith working together for peace and understanding. It is a blessing to cooperate with the FVAMC in the development of their new home.”

“We are grateful to our brothers and sisters in the Diocese for their partnership,” said Khamis Abu-Hasaballah, president of the Board of Trustees of the FVAMC. “This house of worship will serve as a foundation for our efforts to continue building bridges with our neighbors, the local community, and other faith traditions. Our relationship with the ECCT serves as a shining example in our region, and as a beacon of hope for inter-religious understanding and cooperation the world over.

The net income from the sale will be returned to the Missionary Society of ECCT, which provides funding for missional work, among other uses.

— Karin Hamilton is the director of communications for the Episcopal Diocese of Connecticut.