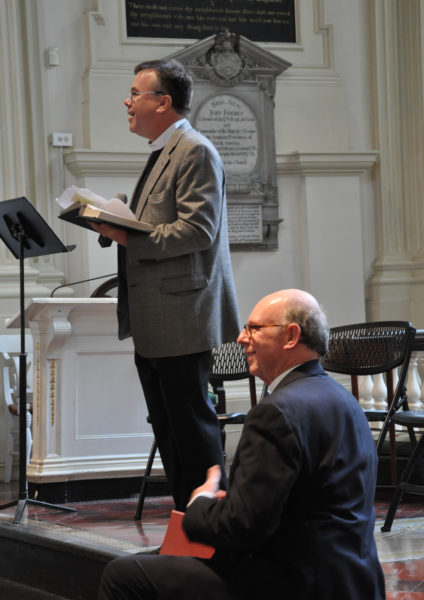 All three Abrahamic faiths — Judaism, Christianity and Islam — believe people are created in God’s image, Rabbi Steve Gutow, president and CEO of the Jewish Council on Public Affairs, reminded participants, and so people of faith must encounter each other as if they have a spark of God’s great wisdom in them that others can learn from, even when they do not agree with each other.

Diocese of Rochester Bishop Prince Singh, noting that the forum had gathered on the Hindu festival of lights known as Diwali, said that it is a spiritual discipline to resist the urge to demonize opponents and instead to strive to bring light rather than heat to conversations on potentially divisive issues.

Produced by The Episcopal Church, the 90-minute forum, titled Civil Discourse in America: Finding Common Ground for the Greater Good, was webcast from Christ Church in Philadelphia (Diocese of Pennsylvania), the birthplace of the Episcopal Church and the church that significantly figured in the United States’ founding.

The sessions are available for on-demand viewing here.

Organizers developed a facilitator’s guide to assist in group discussions and better understanding of the forum. Information about the guide is here.

“Our conversations are limited by human frailty, but they can also partake of divine and eternal possibilities,” Presiding Bishop Katharine Jefferts Schori said in her keynote address, adding that the latter is possible when conservationalists approach each other not as enemies but instead as a “gifted, blessed human being who might have a gift to give us.”

“I remain convinced that face-to-face conversations have more possibility of being life-giving than the disembodied ones we engage so much in by text, tweet and blog,” she said.

“When we fail to see the very human beauty and blemishes in our conversation partners, it is easy to injection venom rather than expect transformation.”

Before the forum’s two panels began, Robert Jones, the chief executive office of the Public Religion Research Institute, briefly summarized an overview of public opinion polls his organization conducted with the Episcopal Church in conjunction with the forum. The overview, “Is Civility Still Possible? What Americans Want in Public Leaders and Public Discourse,” concluded that “despite being divided by generation, by religion, by race, and by political party allegiances, Americans express a strong preference for compromise” and the “public appetite for compromise is growing.”

The country’s fragmented and polarized media contribute to the lack of civility in public discourse, the report concluded, as media outlets “reward extreme rhetoric with political discussion that often aims to create conflict and drama at the expense of moderation.”

Yet, “the overwhelming majority of the public believes that the lack of civil discourse is a major problem for the functioning of our political system,” according to the report.

Religious institutions are hampered in their efforts to foster dialogue because congregations continue to be segregated along racial and even ideological lines, the report concluded. “Religious bodies must also navigate the declining levels of trust in civic institutions, particularly among young adults,” the report said. “When religious leaders focus on divisive issues, Americans are more likely to perceive them as part of the problem rather than as a potential solution.”

During the panel on civil discourse and faith, John J. DeGioia, president of Georgetown University, agreed with Jefferts Schori’s focus on face-to-face conversations. One-on-one conversations, he said, often result in far fewer disagreements than do larger discussions during which individuals rarely connect with each other.

In those small conversations, the participants find there is far more that hold them together than that separates them, he said, adding that churches need to emphasize the commonalities in the human community.

Elizabeth McCloskey, president and CEO of The Faith & Politics Institute, invoked what she called President Abraham Lincoln’s humility and conviction that each person has a vocation to try to achieve a more perfect union. She urged faith leaders to preach both that humility and that assumption of honorable intent.

Saying that many in the U.S. Congress want to compromise but think their constituents do not want them to do so, McCloskey said she would like to see faith leaders model civil discourse “and then have people of faith … start to demand political leaders who will compromise, who will engage in deliberative debate.” 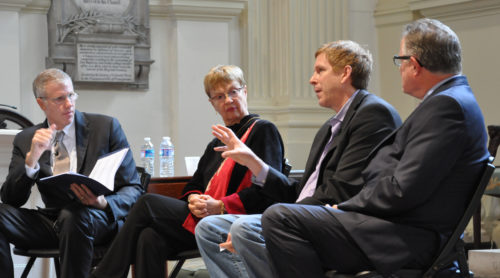 During the second panel, on civil discourse in politics and policy, Carolyn J. Lukensmeyer, executive director of the National Institute for Civil Discourse, warned against believing that the country is truly as divided as the U.S. Congress. Instead, she said, what Alexis de Tocqueville saw in Americans in 1838 is still true today: Presented with a problem, they quickly leave behind ideologies and look for solutions.

“That is an extraordinary asset about where we are right now,” she said.

Addressing the media’s role in civil discourse, David Boardman, dean of the School of Media and Communications at Temple University, said, “Americans use the media the way a drunk uses a lamp post – for support, not illumination.” While American “media monopolies” have been fractured in ways that have often led to a loss of resources that support deep, investigative reporting, the fracturing has also led to the creation of very issue- and geographically-specific media that are providing willing consumers with reporting at a greater depth and breadth than ever before.

South by Southwest Interactive Festival Director Hugh Forrest said the festival discovered that requiring diversity among the festival’s panelists resulted in a creativity that the gathering had lacked earlier.