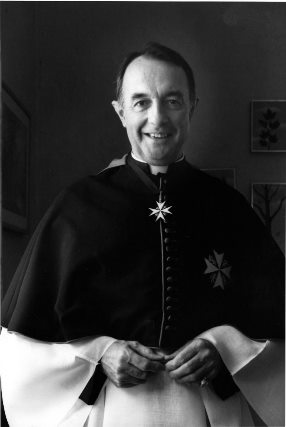 On Wednesday evening, Father Andrew had dinner with Bishop John O’Hara, of the Roman Catholic Archdiocese of New York. On his way home, Father Andrew suffered a massive cardiac episode and collapsed. He was taken to New York Presbyterian Hospital but never regained consciousness.

Father Carl Turner, XIII Rector, celebrated the last rites of the church with Father Andrew Thursday afternoon. Father Andrew was not in pain and was receiving exemplary care. He was surrounded by many prayers and much love as he died.

Bishop O’Hara told us that he had a wonderful evening with Father Andrew; he was reminiscing with great happiness and especially about Saint Thomas Church. Very appropriately, he died furthering ecumenism and feeling loved by his friends and family.

Details of his funeral arrangements will be posted here in due course.

Andrew OBE, DD, who was born in Yorkshire, England, was a priest in the Church of England and served as domestic chaplain to Archbishop of Canterbury Michael Ramsey, a position from which he was called to Saint Thomas in 1972. As XI Rector, he had a distinguished tenure, in which his preaching, pastoral presence and leadership of the liturgy drew large congregations to the Church, an achievement especially notable during an era of general decline in the Episcopal Church. He was awarded honorary degrees from several Episcopal/Anglican seminaries in recognition of his work.

John Andrew was a friend and confidant of many church leaders both within and outside Anglicanism. He was a particular friend of Cardinal Terence Cooke and was a promoter of ecumenical relations between the Anglican and Roman Catholic churches.

Father Andrew’s ministry was remarkable for his ability in social conversation, humor, and joyousness – for which reasons many were eager to claim him as their friend. The secret of his influence was a gift he received and passed on from Archbishop Ramsey – namely, his transparent faith in Jesus and the miracles of the Gospel.

After a brief retirement to England, Father Andrew returned to New York in 1999 where he eventually returned to Saint Thomas at his successor’s invitation to be the “junior curate” as Rector Emeritus. In this role he took part in the liturgy, in social conversation with parishioners, and in fund raising. He departs this life as a beloved member of the Saint Thomas family for over 40 years.