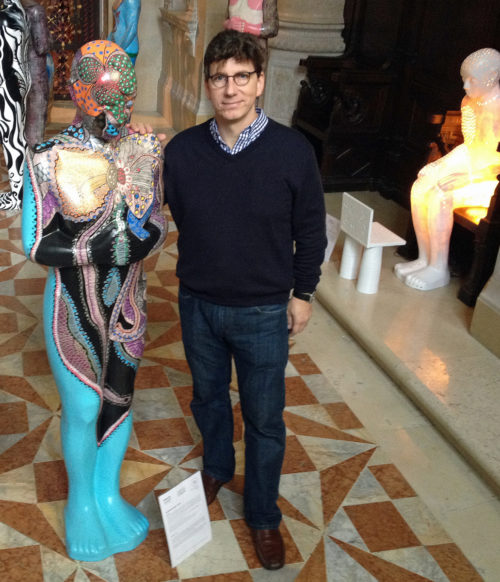 The Rev. Paul-Gordon Chandler, president and founder of CARAVAN, an interfaith nonprofit organization that unites cultures and creeds of the West and Middle East through the arts, stands next to an art piece by Mahmoud Hamdy in the 2014 CARAVAN art exhibition, “AMEN: A Prayer for the World” at the Cathedral Church of Saint John the Divine in New York City until Nov. 23.

[Episcopal News Service] The Rev. Paul-Gordon Chandler grew up in Senegal, a predominately Muslim country in West Africa where his father was a minister.

Throughout his childhood he observed the tension between Muslims and Christians.

“I thought there has to be a better way. Most of my best friends were Muslims, and today still, Muslims number among my closest friends,” the Episcopal priest said, sitting on a wooden bench at New York’s Cathedral of St. John the Divine, the world’s largest Gothic cathedral. He answered logistics calls and texts on his cell phone while taking a break from working on the 2014 CARAVAN Exhibition of Visual Art, “AMEN: A Prayer for the World.”

Open to the public until Nov. 23, the art show embodies Chandler’s lifelong mission: to ease that religious and cultural tension by focusing on commonalities rather than trying to overcome differences. With religious extremism and persecution so prevalent and interwoven so thickly with politics, especially in the Middle East, this mission is needed now more than ever, he said. 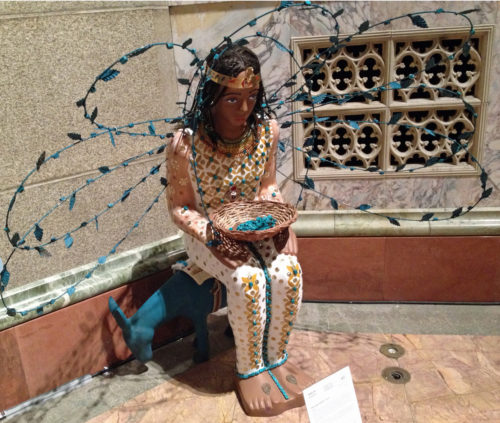 Artwork by Reda Abdel Rahman, co-curator in the 2014 CARAVAN art exhibition, “AMEN: A Prayer for the World” at the Cathedral Church of Saint John the Divine in New York City until Nov. 23. Photo: Amy Sowder

Participating Egyptian artist Reda Abdel Rahman co-curated the show with Chandler, founder and president of CARAVAN, an international interfaith arts nonprofit organization, with the annual CARAVAN exhibition as a flagship initiative. This year, they selected 48 artists – 30 Egyptian artists with Muslim and Christian backgrounds, and 18 Western artists with Jewish and Christian backgrounds. CARAVAN originated out of Cairo, Egypt in 2009 to build bridges between the cultures and creeds of Middle East and West through the arts.

The work of 30 Egyptian artists was first unveiled in June at the Museum of Modern Art in Cairo, Egypt, and joined the work of 18 artists in the West for a joint exhibition at Washington National Cathedral, before its final stop, in New York City.

Chandler and Rahman chose prominent as well as emerging artists who share their mission of using art to foster unity, friendship and peace worldwide. The artists are charged with interpreting the exhibition’s theme on the sculptural form they’re given. This year, it’s the human form in prayer in poses from the Abrahamic faiths. The face on the model for the sculptural prayer form is Amun, the deity of ancient Thebes in the 11th dynasty (in 21st century BC) who is considered the first to develop religion toward monotheism.

The “Amen” theme also embodies the spirit of the January 2011 Egyptian Revolution, when hordes of people from Muslim and Christian backgrounds, levels of education, economic background and ethnicity joined in solidarity against the human rights violations of the almost 30-year rule by the Hosni Mubarak-led autocratic government. After ousting Mubarak, the country’s first free parliamentary elections chose Muslim Brotherhood leader Mohamed Morsi for president. But protests against Morsi’s authoritarianism led to a 2013 military coup d’etat and the election of former general Abdel Fattah el-Sisi as president in 2014. Chandler was residing in Cairo during all this political turmoil. 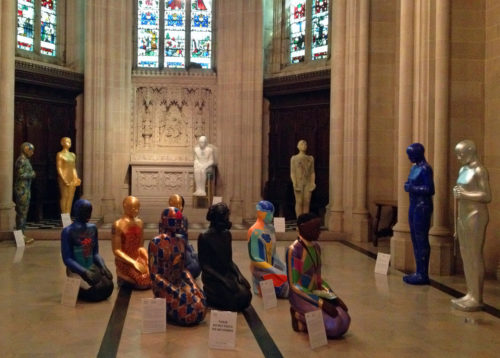 Art pieces in the 2014 CARAVAN art exhibition, “AMEN: A Prayer for the World.” Photo: Amy Sowder

Whoever usurps power inevitably has ties to religious groups, whether it’s the Muslim Brotherhood, the Coptic Church, moderate Muslims or other religious allies, and often the religious-political sect that loses clout in top government loses dignity, freedom and all too often, their lives as well. So the cultural and religious clashes continue.

“What we need is high visibility in the media of Christians and Muslims working together,” Chandler said. “It begins to shape the world view.” That’s his intent with uniting the artists for CARAVAN events.

Rahman was born in Ismailia, Egypt, and is one of his country’s leading contemporary artists today. He grew up surrounded by Pharaonic monuments and Coptic monasteries, and it’s evident in his work. Also clear is his admiration for the female figure and women’s key role in the family and society at large.

For his contribution to the “AMEN” exhibition, Rahman created an ancient Egyptian queen emanating good all around her while sitting on Set, the ancient Egyptian god of evil, which demonstrates her control over the forces of political Islam that have damaged civilization. Many of his works combine different systems of belief.

“We’re only thinking one way,” Rahman said, “so I do my portraits in many ways, with the Jewish star and Christian cross and Muslim crescent. I want different people to feel we are the same, the same God also, just different culture only.”

Rahman met Chandler while the Episcopal priest served from 2003 to 2013 as rector of the Church of St. John the Baptist/Maadi in Cairo, Egypt, the international English-speaking Episcopal/Anglican church within the Episcopal Diocese of Egypt and North Africa. Chandler is also a mission partner of the Episcopal Church, focused on the Middle East. Rahman was a participant artist the initial CARAVAN Exhibition of Visual Art in Cairo. This is his second year co-curating the CARAVAN art exhibition. He lives with his wife and children in Queens, New York, and they also have a home in Cairo.

The last few years, Rahman’s art has dealt with the religious and political strife in Egypt, which applies to many areas of the Middle East, particularly the tumultuous Islamic extremism in Iraq and Syria.

“In today’s world, we need peace,” Rahman said. “We don’t have to make all these problems.”

For her art piece in the show, Jewish artist Lilianne Milgrom enjoyed researching about winged messenger angels in the Islamic, Jewish and Christian sacred texts. Born in Paris, France, Milgrom lived in Australia during part of her childhood and later spent 17 years in Israel before settling in Washington D.C.

She received the “AMEN” sculptural form in the traditional Jewish sitting prayerful pose, and she added wings. The front of her angel’s chest is emblazoned with a QR code to connect the spiritual world with the digital world. Visitors can wave their cell phones in front of her sculpture to scan the code, which will take them to www.virtualangel.weebly.com, where they can post a prayer.

“Prayer is a dialogue no matter which religion, and I wanted to make it interactive on whatever level the viewer is on, from atheist to believer,” Milgrom said.

The prayers on the website do range from atheist to Christian, ethical humanist and beyond, with a variety of entries: “Please save us from ourselves,” “Peace for the World,” “Why?” and “May people see the good in each other.” 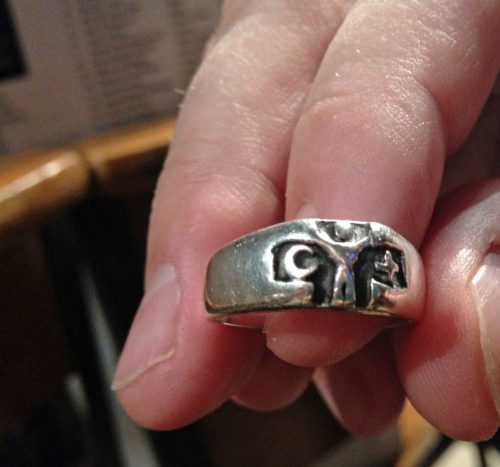 The Rev. Paul-Gordon Chandler, president and founder of Caravan, wears a ring symbolizing the bridge a person can build to connect Muslims and Christians. Photo: Amy Sowder

Milgrom and Chandler will co-curate the 2015 Caravan exhibition, which will launch in Paris, France. Chandler is adamant that Caravan’s mission is to go further than encouraging interfaith dialogue.

“I’m passionate about interfaith friendships,” Chandler said, slipping off the silver ring he wears, which depicts a person bridging the gap between the symbols of the Christian cross and Muslim crescent.

“Friendship involves time and investment in the other,” he said. “CARAVAN is a creative catalyst for that.”

— Amy Sowder is an ENS correspondent.