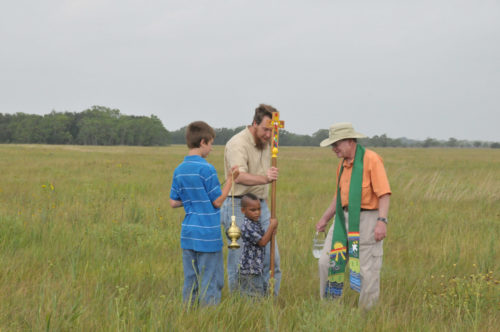 The Rev. Peter Conaty blesses the Nash Prairie at a special service with church members and The Nature Conservancy. Photo: Diocese of Texas

[Episcopal News Service] St. Mary’s Episcopal Church in West Columbia, Texas, sits in the midst of a once majestic coastal prairie that stretched from Louisiana, across the rolling grasslands of the Gulf Coast, and nearly to Mexico at the Rio Grande.

Less than 1 percent of this extensive tall-grass Eden remains and only a tiny fraction of that is as pristine as when humans first set foot on the vast landscape. Today, 400 acres of it are being preserved for posterity through the joint efforts of St. Mary’s and The Nature Conservancy, the international land preservation organization.

This piece of ecologically rare land – called the Nash Prairie – is considered the largest remnant of the original prairie on the upper Texas coast. Except for the occasional cutting of hay for livestock, it has never encountered the cut of a plow. Plus, “it is one of the most diverse prairies left in Texas,” said Dan Snodgrass, associate director of land conservation for The Nature Conservancy in Texas.

Scientists have identified more than 300 species of plants – some rare and one even thought extinct in Texas – and over 120 species of birds on this biological treasure box.

St. Mary’s rector, the Rev. Peter Conaty, his wife Susan and the church’s parishioners are in large measure responsible for ensuring that this priceless prairie will never be covered up by a subdivision spilling over from Houston, 60 miles northeast. 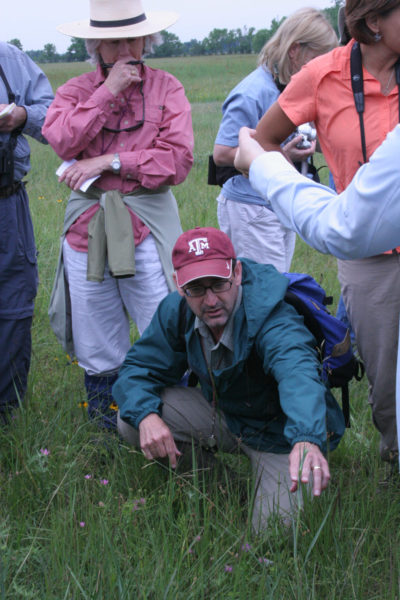 A Texas A&M University botanist explains the plant life on the Nash Prairie on a guided tour. Photo: Diocese of Texas

The Nash Prairie was carved out of the 12,000-acre KNG Ranch, a sprawling spread named after the owners’ daughter, Kittie Nash Groce. A Houston socialite and Episcopalian, she took over management of the ranch after her father died in 1930. A major contribution from her helped fund the construction of St. Mary’s Church and Parish Hall. At her death in 1957, her will left the ranch to St. Mary’s, the local hospital district and a series of heirs. The ranch completely reverted to the church and hospital district in 2006 when the last of the heirs passed away.

Conaty and his wife suspected the Nash Prairie portion of the ranch, some 20 miles from St. Mary’s, deserved special protection for its historical and biological significance. Scientists studied the land and confirmed their hunches. Following conversations with various preservation organizations, The Nature Conservancy eventually purchased the prairie from the beneficiaries in 2011.

Since the Conservancy’s staff members live more than an hour away, the Conatys, church members and other community volunteers keep an eye on the preserve and “spend a lot of time helping with the management,” Snodgrass said. This includes harvesting seeds from the plants that are used in other prairie restoration projects.

In 2004, even before the Conservancy acquired the prairie, the Bishop Quin Foundation of the Diocese of Texas granted $300 to St. Mary’s to create a Prairie Prayer Garden on the church’s campus and planting it with seeds and grasses from Nash. The garden brings the prairie into town as a community educational tool, serves as an outdoor worship space and provides a prayerful spot for people when the church is locked or “they really don’t feel comfortable in a church,” Conaty said.

Preserving the prairie ties in with the Episcopal Church’s mission of protecting the environment, Conaty said. “God created the earth and we should honor God for this earthly creation,” he said.

St. Mary’s work on the prairie also addresses the Episcopal Church’s endorsement of the United Nations’ Millennium Development Goal of ensuring environmental sustainability. “St. Mary’s is fulfilling one of those goals since we are blessed with the coastal prairie in our back yard,” he said.

He also believes in what theologians call a “thin place” where heaven and earth meet. “To me, the Nash Prairie is that place,” he said.

With the funds it has received from the KNG Ranch, St. Mary’s has worked to encourage environmental awareness among school children by sending 5th graders from West Columbia Elementary School to the Discovery Program, an environmental and leadership program.

St. Mary’s is not finished with preserving the KNG Ranch property, Conaty said. “Preserving the Nash Prairie was just the first step,” he said. Eventually, the church would like to preserve a section of the ranch that encompasses a stretch along the Brazos River that is a major flyway for migrating birds.