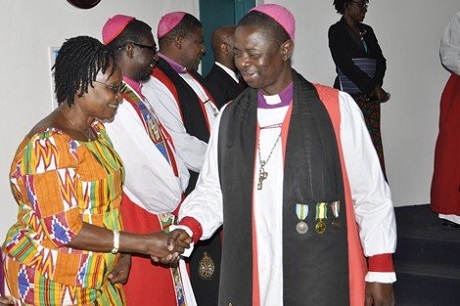 Primate and Bishop of Kumasi Dr Daniel Sarfo’s clergy have determined that shaking hands during sharing the Peace will no longer be permitted to stop the spread of Ebola. Photo: The Church of the Province of West Africa

[Anglican Communion News Service] Clergy in West Africa have challenged Anglicans worldwide to “live as their brothers’ keepers” and act to address the Ebola crisis.

The priests of the Anglican Diocese of Kumasi, Ghana, issued their challenge after a workshop entitled Church and Community Response to Ebola in which they learned more about the disease and how to prevent its spread.

In a statement issued after the workshop Message to the International Community, they said, “We challenge the international community to live as their brothers’ keepers*. We encourage Anglican Churches or Christian Churches the world over to express their solidarity by observing one Sunday as Ebola Sunday to pray and mobilize resources for the affected areas in the sub-region or West Africa.”

“They should encourage their governments to send resources especially the found drug to the affected areas by way of advocacy.”

The clergy did not hold back as they called on the United Nations to provide material and equipment to countries affected by the virus. They also called for international community to collaborate to stop conflict in countries in Africa and the Middle East “instead of waiting for lives and property to be destroyed before the come in with aid”.

No more shaking hands
The workshop training carried out at St Cyprian’s Anglican Cathedral, Kumasi, was led by Dr Irene des Bordes. It prompted the clergy to announce they would cease embracing and shaking hands during the Peace at church services; would only perform Holy Communion by intinction; would wear gloves, socks and shoes when visiting the dead or those in hospital; and would wash their hands using running water and hand sanitizers.

Several provincial Churches of the Anglican Communion including in Nigeria have announced similar precautions in hope that they can stop the spread of this disease that has, to date, killed 3,439 people and infected 7,494. Experts say it could infect up to 1.5m people by January of next year.

Ebola at war against humanity
The Primate of the Church of the Province of West Africa, the Most Rev. Daniel Sarfo, also issued a statement welcoming the UN UN Mission on Ebola Emergency Response (UNMEER).

He expressed his gratitude to its staff and also other agencies including the Anglican agency Us for their contribution to tackling the crisis in region. He said, “Now Ebola is at war against humanity, the world must act now to stop Ebola.”

The full statement can be found below.

On behalf of the President, the people and the Church of the Province of West Africa (Anglican Communion), I welcome the UN Mission on Ebola Emergency Response (UNMEER) led by Mr. Anthony Banbury to Accra, Ghana to begin a mission to contain the Ebola Virus Disease (EVD) in West Africa. We consider the UN mission as timely and we are very grateful.

The Advance Party of United Nations Mission on Ebola Emergency Response (UNMEER) has arrived in Accra in Ghana, which will be used as the base for the Mission. It will be made up of 250 personnel – 100 will be based in Accra and 150 for the affected Countries.

Their mandate is five-fold – “stopping the outbreak; treating the infected; ensuring essential services; preserving stability; and preventing further outbreak. It is our prayers that we all support them to make the mission’s work a great success.

We express our profound appreciation to the UN, WHO, Organizations and Bodies like the Bill Gate Foundation for coming to our Aid, not forgetting those working with the Anglican Church such as Us (USPG) , UK Government through DFID and those who are about to join. We also encourage Anglican Churches or Christian Churches the world over to express their solidarity by observing one Sunday as Ebola Sunday to pray and mobilize resources for the affected areas in the sub-region or West Africa.

Now Ebola is at war against humanity, the world must act now to stop Ebola.