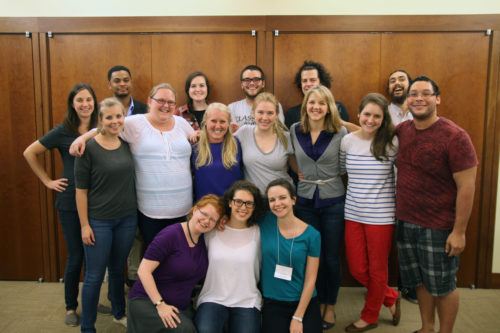 [Episcopal News Service] Serving abroad as a Young Adult Service Corps missionary is more than just a job, it’s a journey of discovery of self, faith and of the Anglican Communion.

As opposed to other international programs that offer young people an opportunity to serve in volunteer positions abroad, the Episcopal Church’s Young Adult Service Corps program, commonly referred to as YASC, offers one familiar comfort the others do not: the church.

“YASC offers an opportunity to experience a different part of the world with support, and a level of familiarity because of the church,” said Elizabeth Boe, the Episcopal Church’s officer for global networking. “The program is based in relationships, partnerships around the world.”

“When you see them come back it’s the most rewarding time,” said David Copley, the Episcopal Church’s team leader for global partnerships. “You see how they’ve grown and survived the struggles.”

YASC is open to young adults aged 21 to 30 who are given the opportunity to serve as missionaries, initially for one year, exploring new ways of living, while serving throughout the Anglican Communion. There are currently 17 YASC missionaries – six of them in their second year – from 18 dioceses serving in Anglican churches in 15 countries from Uruguay to the Philippines to Spain and South Africa.

All it takes, he said, is an application and attendance of the discernment weekend.

(Click here for a discernment weekend reflection by Ashley Cameron, who spent a year in the Philippines serving in the Diocese of Santiago.)

Carlin Van Schaik, 23, of St. Christopher’s Episcopal Church in Lubbock, Texas, in the Diocese of Northwest Texas decided she wanted to serve as a YASC missionary when she was 15 years old.

Her decision, she said, was somewhat influenced by Matthew 19:21, the story of the rich man whom Jesus told to sell everything; a lesson Van Schaik has applied in her own life. “I wanted to follow that call,” she said.

YASC also appealed to Van Schaik, she said, because she was “interested in the idea of the ‘world church,’ and what it means for a church to be in partnership with another church.”

Van Schaik served the Anglican Church of Korea in the Diocese of Seoul where she worked for an urban elder care program and a rural after-school program.

The language, she said, was a challenge but she learned that Christianity transcends culture; and she came to believe in the sincerity of expression. Throughout her year in South Korea, Van Schaik relied on a dictionary to communicate. That and sincerity can get you far, she said.

Van Schaik is one of the six YASC returning to the missionary field for another year, this time to the Diocese of Northern Luzon in the Episcopal Church of the Philippines.

Another YASC heading back into the field is Alan Yarborough, of Trinity Episcopal Church, Ashville, North Carolina, in the Diocese of Western North Carolina, who is serving the Episcopal Diocese of Haiti for a second year at Good Savior Church in Cange, a small village in the country’s central plateau.

Yarborough was assigned to work on economic development projects, he said, but serving as a language interpreter from Creole to English and vice versa makes up a large part of his job.

During his year in service Yarborough has learned “to rely on others and myself more; I’ve grown in confidence and communication.”

Interpretation, he said, is more than language translation, “It’s being able to interpret the culture, historical context and temperament.”

One thing that’s been a challenge for him, however, he said, is the lack of privacy and being recognized everywhere he goes. Still, he loves living in Haiti and his desire to return stems from the relationships he’s built with Haitian and American partners, and the feeling that his job isn’t done yet.

After her year of service in Honduras, Gleason returned to southern California, where she is working for the Diocese of San Diego serving its Latino and Hispanic ministries, as well as its young adult ministry. She also serves at St. Michael’s By-the-Sea, in Carlsbad, California, where she works in children’s ministry.

“I feel like this is where God is calling me know,” she said. “I keep praying always to see where God leads me.”