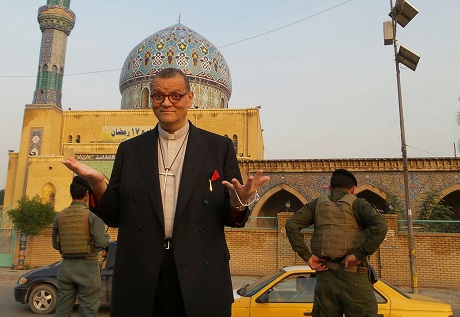 Canon White traveled to center of Baghdad Oct. 1, where Saddam Hussein’s statue had once stood: “I was quite horrified to see that flying from that plinth was an ISIS flag.”

[Anglican Communion News Service] Christians in Baghdad are still being baptised despite the threat of execution by the radical Islamist group Islamic State (IS) which is currently fighting to get to the Iraqi capital.

The Anglican priest who has served the beleaguered city for more than a decade, Canon Andrew White, today told ACNS he thought the threat posed by IS was actually one reason the believers wanted to be undergo baptism.

“People really wanted to demonstrate their faith and that’s good,” he said. Publicly identifying oneself as a Christian is a particularly courageous move in a country where IS has been intentionally targeting religious minorities.

In towns they have captured IS fighters daub the Arabic letter ‘N’ (for Nazarene) on the homes of Christians. The occupants are offered the choice of leaving, paying a massive tax, converting to Islam or being murdered.

A mother and four young children who were baptized Oct. 1 had been brought up Christian, but from a mixed Christian/Muslim background. Canon White did not want to say more about them for fear of reprisals from IS supporters; that afternoon he had traveled to center of Baghdad, where Saddam Hussein’s statue had once stood: “I was quite horrified to see that flying from that plinth was an ISIS flag.”

Despite this, the man nicknamed the Vicar of Baghdad rejoiced in the chance to carry on his priestly ministry in Iraq: “It was lovely baptizing them and the children were so excited. One little boy came up to me and said, ‘I feel like a new person now’ and I told him, ‘You are’.

“In the midst of such a desperate situation it was wonderful to have something which was so nice.”

Canon White explained that his church, St George’s, once had a congregation of around 1,000. “On Sunday we only had 160. That’s because so many of our people have gone up north.”

Despite the dwindling numbers and the possibility that IS could arrive in Baghdad at any time, Canon White is determined to continue his ministry for Christians in the capital and in Erbil where he and staff are delivering much needed-relief supplies.

“Thousands upon thousands of people remain Internally Displaced People (IDP’s) on the Kurdish boarders in the North,” he said. “Limited food, living in simple plastic tents and having none of the much-needed provisions. We are trying to provide as much of what is needed as possible.

“One of the things we’re looking at is establishing a separate Christian village comprising separate trailers with four bedrooms [for refugees] which would be better than these awful plastic tents.”

At $11,000 each, the trailers are not cheap. Much of his financial support comes from Anglican churches in England, US and Canada, but he said that, thanks to social media, he also has supporters in Anglican churches as far away as Australia and New Zealand. IS are, he said, not the only ones to make good use of the Internet.

IS are currently estimated to be 20 miles away from center of Baghdad. However, for Canon White things are business as usual. “I certainly plan to stay, though I do have other meetings coming up. I’m in Israel next week and I have to go to California, so I will continue to do things I have to do, but I’ll be back as soon as I can.”