[Diocese of West Texas] The number of refugees crossing the southern Texas border from countries in Central America has decreased significantly in recent weeks. 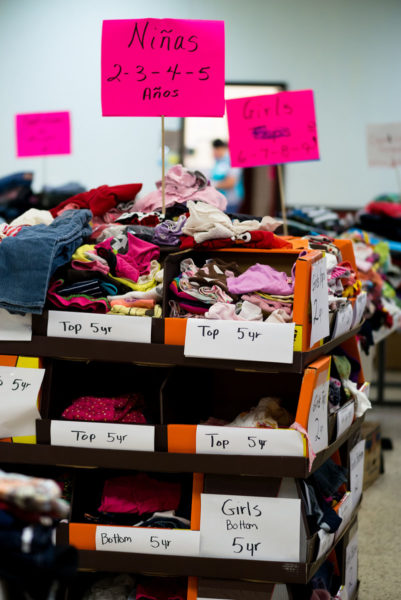 Donations of clothes are organized for all ages at Sacred Heart Catholic Church, where the Central American refugees first arrived. Photo: Trish Motheral.

According to Catholic Charities, an estimated 50 people cross the border each day, compared to 150 per day this summer. Due to the graciousness of donors across the United States and Canada in response to a diocesan-wide appeal by Bishop Gary Lillibridge, the Episcopal Diocese of West Texas has responded to the immediate needs of the refugees through the ministries of St. John’s in McAllen and Christ Church in Laredo.

On July 3, Lillibridge made an appeal to the Diocese of West Texas, requesting donations and volunteers to respond to the sudden influx of Central American refugees that overwhelmed the border communities of McAllen and Laredo. St. John’s and Christ Church became heavily involved in reaching the refugees’ basic human needs by providing packs of nutritional and hygienic items, among other types of assistance.

Lillibridge’s appeal was read nation-wide, and donations have poured into the diocese from Episcopal entities, churches, and individuals. The diocese has distributed $124,000 to assist the ministries of St. John’s and Christ Church. “The response has been tremendous and gracious,” said Dr. Marthe Curry, development director for the diocesan Department of World Mission.

Lillibridge said, “We are deeply grateful for the outpouring of care and concern across the Church, the United States, and Canada, for these, our fellow human beings. In addition, the generous financial support that has been received is being used to alleviate suffering and provide food, water, hot meals, and many other basic necessities. With the decrease in the number of Central Americans crossing recently, we are able to sustain our efforts at the present time; although if there appears to be an increase in need, we will keep everyone informed.”

St. John’s, McAllen, has distributed thousands of backpacks to refugees. The nutritional and hygienic items in each backpack served to sustain the refugees in their journeys from McAllen to relatives’ homes in the United States. “We were very efficient,” said the Rev. Jim Nelson, rector of St. John’s, “We have overproduced, and we have a supply of backpacks on hand to continue our ministry.”

Due to the generosity in donations, Nelson was able to personally deliver checks to the Rio Grande Valley Food Bank and the Salvation Army in McAllen on behalf of the diocese and the thousands of supporters. The morning he visited the Salvation Army, the office manager, Maggie, told him they had been praying for funds to come in, specifically for $20,000 to cover their budget shortfall.

Nelson told Maggie her prayers had been answered, as he handed over a check for $20,000. Both Maggie and the Chief Officer of the McAllen Salvation Army office began to cry and profusely thanked Nelson.

“It was such a privilege for me to serve as God’s agent in that regard,” said Nelson.

A check for $20,000 was also delivered to the Food Bank that same day.

The volunteers have come from all over the United States, as well, many of them staying in the youth house at St. John’s this past summer. St. John’s became the call center – fielding volunteers to the local entities all working to respond to the refugee crisis.

“When there were 150 immigrants arriving each day, 100 volunteers were needed to meet their needs,” said Nelson. Not only did the volunteers help process the immigrants, they were also needed to organize and work through the heaps of material donations coming into the Food Bank and the Salvation Army.

“Our efforts will continue,” said Nelson, “but the consequence of the downturn in numbers is that the various entities with which we are working are well-stocked at the moment.” The supplies on hand will continue to be distributed as immigrants cross the southern Texas border every day.

— Laura Shaver is communications officer for the Diocese of West Texas