Dean and President of VTS, Very Rev. Ian S. Markham, Ph.D. observed, “This is an exciting development in the life of the Center for Anglican Communion Studies and the life of Virginia Theological Seminary. We are delighted to recognize the work of three outstanding thinkers and practitioners whose work resonates deeply with the priorities we have at the seminary.”

The Director of CACS, Rev. Robert S. Heaney Ph.D., D.Phil. commented, “The Center for Anglican Communion Studies exists to promote and practice deeper community for the Communion. We are delighted that Rev. Sanderson, Rev. Sachs and Ms. Sayilgan have accepted these fellowships as people who reflect and enhance our vision. We look forward to working with them further and partnering with them in ways that are mutually beneficial.” 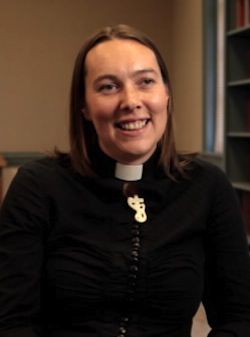 Eleanor Sanderson is a priest in the Anglican Church of Aotearoa New Zealand and Polynesia. Sanderson has combined her service in the church with an involvement in community development work and ongoing community research projects. She is a former Post-Doctoral Fellow at the Centre for Theology and Public Issues at Otago University. Sanderson’s research has primarily focused on the interplay between international community development and Christian spirituality, with a particular attention to the spiritual wisdom of women involved in grass roots community action. She was recently the Weaver (Key note speaker) for the conference Anglican Women at Prayer, Weaving our Bonds of Affection co-hosted by the Center for Anglican Communion Studies and the Society for the Companions of the Holy Cross. She lives with her family of husband Tim and children Zac (aged 6) and Joe (aged 4) and currently serves as Vicar of the Parish of Eastbourne in the Diocese of Wellington, New Zealand.

William L. Sachs is an Episcopal priest, consultant, scholar, and author. He directs the Center for Interfaith Reconciliation and assists at St. Stephen’s Church in Richmond, Virginia. Previously Sachs was Vice-President of the Episcopal Church Foundation in New York and a priest serving parishes in Virginia, Chicago, and Connecticut.

Author of six books, over 200 articles and cited by major media outlets, he has been Visiting Professor of Church History at Virginia Theological Seminary and at Yale Divinity School. He has been a Chabraja Fellow at Seabury-Western Seminary and adjunct faculty at Union Theological Seminary (Virginia) and the University of Richmond. He has addressed interfaith events in Egypt, Jordan, Oman, Pakistan, and Qatar and led travel groups to various countries in the Middle East. Sachs consults with Family Health International, an international source of HIV/AIDS prevention and treatment. He conducted USAID-funded research on the response to this disease by religious groups in seven countries, and sits on the Protection of Human Subjects Committee which reviews HIV/AIDS research. He has also consulted with the Lilly Endowment and the Luce Foundation on religious leadership. He is a trustee of the Elizabeth Raymond Ambler Charitable Trust of Wilton, Connecticut.

Sachs received the PhD at the University of Chicago in modern religious history after earning degrees from Baylor, Vanderbilt, and Yale. A native of Richmond, he is married to Elizabeth Austin Tucker. His daughter, Elizabeth Sloan Smith, has two young sons and directs mobile applications and branding for the Weather Channel in Atlanta.

Zeyneb Sayilgan is currently a Senior Fellow and Luce Muslim visiting scholar in the Center for Anglican Communion Studies, Virginia Theological Seminary. Her doctoral research at Georgetown University’s Theology department focuses on the intersection of Islamic theology and immigration. Sayilgan obtained her BA/MA degrees in Islamic Studies and Law at the Johannes Gutenberg University of Mainz, Germany in 2004. In 2008 she graduated from Hartford Seminary, CT with an MA in Islamic Studies and Christian-Muslim relations.

Zeyneb writes frequently on matters concerning Islam and Muslim immigrants in Europe on the online journal MIGAZIN (Migration in Germany). She is also the book review editor of the Journal of Studies of Interreligious Dialogue and a reviewer for the Journal of Ecumenical Studies. Her research interests are Islamic theology and ethics, Christian-Muslim relations and Islam in the West. Zeyneb serves as Program Fellow at the Study of the US Institutes on Religious Pluralism directed by the Department of State. She was adjunct faculty of the Washington Theological Consortium and the Catholic University of America in DC. From 2010-2014, she served along with her husband Salih as Chaplain-in-Residence on Georgetown’s diverse campus organizing a variety of student programs.

She is fluent in Turkish, Kurdish, German, English, has reading skills in Arabic and Farsi and traveled to Egypt, Syria, Jordan, Burma, Malaysia, Singapore and many European countries to explore interfaith dynamics on the ground.  Sayilgan and her husband live on campus at VTS.