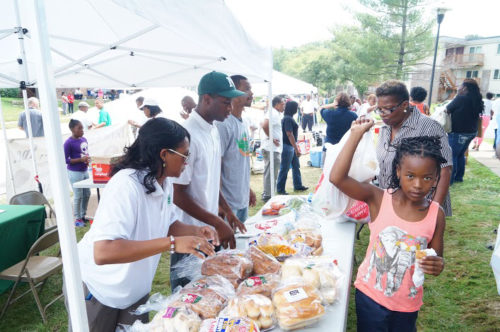 [Episcopal News Service] Eighteen-year-old “C.J.” remembers his Normandy High School classmate Michael Brown “as just a chilled out sort of guy. He was just a cool dude, a rapper, who was really into making his own music. Being the teen that he was, I just would never have known that he would have gotten killed like that. It just doesn’t make sense.”

Nearly two months after the Aug. 6 fatal police shooting of Brown, an unarmed African-American teenager accused of shoplifting, many in the Ferguson, Missouri community still struggle to make sense of the shooting, the violence it elicited and the festering wounds it exposed.

There are fears of a reprise of violence as the metro area awaits the outcomes of an ongoing grand jury investigation, and of the judicial processes regarding the officer involved in the shooting, Darren Wilson, who is white, and ultimately the realization of justice for both the Brown and Wilson families.

In spite of the “incredible sense of tension and fear that exists just beneath the surface,” Episcopalians and others are moving forward, partnering through conversation, ministry and economic development to spark change, according to the Rev. Marc Smith, rector of Ascension Church in St. Louis, where C.J. has been a lifelong member. 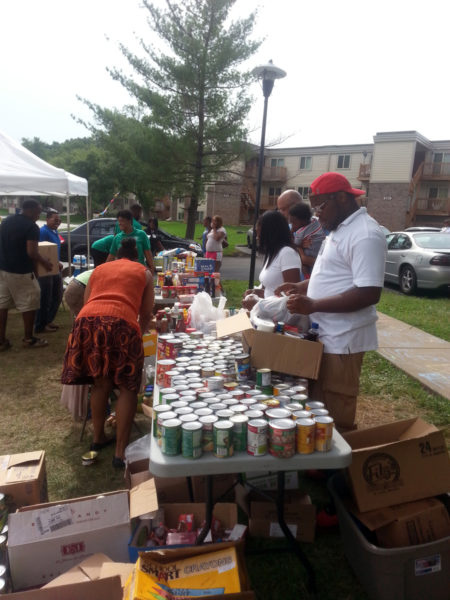 The Episcopal Church and Episcopal Relief & Development recently awarded a $40,000 grant to Ascension and two other north St. Louis churches. Each church operates a food pantry, and with the grant and other resources, is focused on collaborative community engagement.

Communities of faith are positioned to facilitate positive change, according to C.J. and others. “Ascension is a family church, for real,” said C.J., whose first week of classes at Southern Illinois University Carbondale coincided with the Ferguson violence. “There’s just a lot of love there, a lot of activity.”

He said the violence “makes me want to do better, not just for Ferguson as a whole, but to finish college, to do big things so I can be able to give back to the city. From seeing [what happened to] Michael Brown, that’s what I want to do. It makes me want to work harder.”

Jamaican-American Leah Clyburn remembers her home being egged and her brother repeatedly racially profiled by authorities while growing up in their predominantly white Affton, Missouri neighborhood near St. Louis. She also learned a kind of racial resilience because “I wanted so badly to be part of the group,” she recalled. “I wasn’t allowed in the homes of some of my classmates, so I learned to hide in the basement if their parents came home.”

After the Ferguson violence, she opened up for the first time about her experience, with a racially diverse group of other parishioners at the invitation of the Very Rev. Mike Kinman, dean of St. Louis’s Christ Church Cathedral.

“I remember looking at my mom as I said it because she didn’t know these things and I hadn’t told her about them,” Clyburn told ENS.

“It was really important for me to be vulnerable that day. I thought, the hard conversation is live and it’s happening,” recalled Clyburn, 31, outreach coordinator for Faith Aloud, a St. Louis reproductive rights nonprofit agency. That conversation prompted her to initiate a similar one with co-workers and the agency has joined “Hands Up, Don’t Shoot” and plans to participate in its Oct. 10-13 national call to action.

Other participants of that early conversation felt “like this was expected to happen, eventually going to happen and there’s a long road to change,” Clyburn said. “That was the older African-American people who have lived in Missouri for years and … it hurts because they have been in this for a long time, and it’s still here. It made me sad to hear that.”

But, hearing confusion and uncertainty from white parishioners, on the other hand, felt refreshing, she said. “For me not to hear things like, ‘you people need to move on from this’, but to hear them say they didn’t know what to do, that was humility.”

Alice F. Stanley, 62, said that the conversations are important because “you have to start someplace. If people can talk, if they can be honest, there’s hope they can change behaviors. You have to start at ground zero and build your way up. The question becomes: what are you building yourself up to be?”

Stanley, a St. Louis native and cathedral congregation member for 39 years, recalled living with segregation and being “always aware of the divisions of race. We were told we had to be twice as smart and work twice as hard as white folks,” said the adjunct Harris State University professor.

Ascension Church’s Smith said that “there are several generations of people in the white community who’ve come to believe both naively and self-servingly that we are somehow a post-racial community, or that whatever racism exists in St. Louis is at an individual level, some individual bad behavior rather than institutionalized in politics, the educational system and social systems.”

Even the Rev. Steve Lawler, rector of St. Stephen’s Church in Ferguson, which has a history of actively engaging the community, said the violence taught him the city “wasn’t as broad or as inclusive as I had thought. I’ve had to struggle with thinking that I understood when I really didn’t understand and I’m still coming to understand.”

Listening, plain and simple, is key, and the difficult conversations must continue, according to Kinman. “The question is, not how do we respond to Ferguson, but how do we respond to the reality that Ferguson revealed? It’s a reality that’s all over the northern part of the county and it’s long-term, structural. How do we shift resources to a region that has been resource-starved?

“It’s also a call for us to look in the mirror as a congregation,” he added. “We have a somewhat racially diverse congregation but in what ways do we live a segregated life? Instead of saying how do we go out there, it’s a question of saying how do we look at ourselves and say how are we being given the opportunity to embody in this cathedral community what we hope for the St. Louis region?”

Working harder, ‘embodying hope’
Once St. Stephen’s rector Lawler realized that the church’s food pantry wasn’t as visible within the community as he’d previously believed, he set about to change it.

Consequently, “we’ve become a hub for six locations” to distribute food to local residents, using tents and donated space staged at various locations throughout the community, Lawler said. “The important thing is, we are moving away from a sense of ownership and quickly into a sense of collaboration and relationship.”

Dunnington said that the food pantry typically is open on Saturdays and weekly feeds about 300 people. As one of the grant recipients the church “is hoping to enhance the quality of what we’re doing” through offering nutritional and health education.

“We have been really working to reconnect with the folks in the neighborhood because a lot of our parishioners don’t live here,” he said.

In addition to partnering with health-related agencies, the three churches are hoping to use the grant to explore long-term economic development and business management assistance for local small businesses and to offer vocational training for area youth.

“The bottom line is, we want to do everything we can to invest over the long-term, to leverage the investment the Episcopal Church is making to assist businesses that already were struggling to grow and to thrive,” Ascension Church’s Smith said.

Among the proposals under consideration is development of a food delivery service to train and employ youth. “We plan to acquire a delivery vehicle, train young people under the age of 25 from within the community as drivers, teach them the basics of customer service, scheduling, reporting and pair each of them with a mentor to assist them with developing their work life and encourage them if need be to complete their GEDs or to enroll in vocational or academic education,” Smith said.

“It is a way to help young people get the skills and confidence they need to enter into the work force.”

Community input is key. “We realize that there are decades, if not centuries of history that inform why Ferguson happened and it’s going to take concerted effort over an extended period of time to even begin to address these issues in a meaningful way,” Smith said.

Additionally, Smith said it’s important for the church “to continue to be the prophetic voice of justice. The hard part of that is it’s not just justice for Michael Brown but justice for the police officer as well, whatever that is.”

It involves the truth-telling and reconciliation “that we need in our ministries and witness but also in our interaction with the larger community,” he added. “The call upon all of St. Louis is to come clean with who we have been as a community, what the consequences of our history are and to begin to galvanize together responsibly to work toward reconciliation and a better St. Louis.”

The church’s role is, with “people floundering, flailing, weeping, trying to understand, to simply reach out and love people and to love the community that St. Louis is and help convey that, for all our warts, this is a beloved and special place.”

The Rev. Renee Fenner, rector of St. Barnabas Church in Florissant near St. Louis, likes to remind people that next steps include prayer and that the work of the diocesan commission to dismantle racism continues.

A dismantling racism workshop had been scheduled at St. Barnabas before the Ferguson violence, added Fenner, who is African-American. “I told my parishioners this had to be a God thing … so we could get dialogue going as mandated in the resolutions from convention, just to talk about history and race relations and what St. Barnabas’ history in all of that was. It just so happened that it was right on time.”

The workshop facilitated a conversation, not only about that history but also about “what it means to be the body and blood of Christ, and welcoming everyone as children of God,” she said.

“There was no pointing fingers or name-calling or anything like that,” she said. “It was a very Christ-like and safe place to have the conversation that needs to happen, and people said what was on their minds and hearts. There are people who want to do more but don’t know exactly what to do and in times like that when you don’t know what to do, you turn to God in prayer,” she added.

Meanwhile, the cathedral also is hosting a series of collaborative leadership development workshops about pursuing racial justice and effecting change and is “looking to include the natural leadership that already exists in the communities most affected by this.”

And not just regionally, he added. “We have been sowing the seeds of this present time by ignoring these cries for a long, long time.

“What I would say to other cities and metro regions of the country is, don’t think this is just St. Louis, that this is just Ferguson. Take this opportunity to look in the mirror and say where is Jesus? Let’s listen to those voices crying out.”