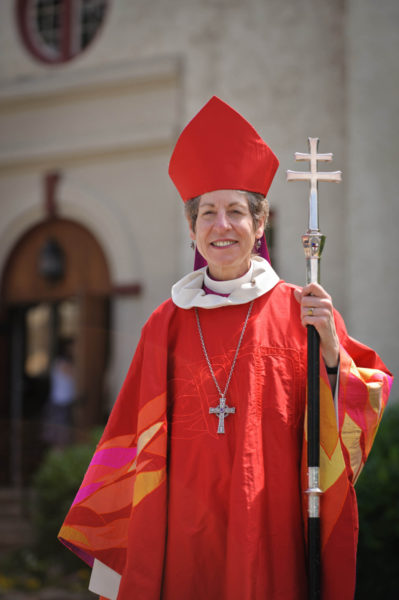 To all the people of God in The Episcopal Church:

It is a great joy and privilege to serve as your Presiding Bishop.  I have been blessed to be able to meet and build relationships with people around the globe – in every diocese in this Church, most of the provinces of the Anglican Communion, our full communion partners (ELCA, Moravian Church, Old Catholics of the Union of Utrecht), as well as civic leaders and leaders of other denominations and faith traditions.  That relational work is fundamental to the reconciliation we seek in Christ.  As bridges are built, more and more people can begin to cross the divides between us, and God’s dream begins to take flesh in a more just and peaceful world.

Together, we have navigated a season of extraordinary change in recent years.  Our Christian values have been challenged and we are becoming clearer and more confident about the faith we share.  Today we are far more cognizant of the diversity of this multinational and multicultural Church, and the great blessing of the diverse peoples and cultures we represent.  Our life as a Church is enriched by the many gifts God has given us in people and contexts around the world.  Together we are striving to live out the Five Marks of Mission, we are exploring new and creative ways of engaging the societies around us with the good news of God in Christ, and we are increasingly willing to spend ourselves and the resources God has given us for the healing of the world.  We are more attuned to voices crying in the wilderness, those living at the margins of human communities, and those without a voice, including this fragile earth, our island home.  Together, we are moving into God’s future with courage, boldness, and the humility of knowing there is always more to learn.  For all that hope-filled movement, I give thanks in abundance.

I have spent many months in discernment about how I am being called to serve God’s people and God’s creation in this season.  I have resisted the assumption by some that presiding bishops can only be elected to serve one term, knowing the depth of relational work and learning that is involved in this ministry.  There is a tradeoff between the learning curve and the ability to lead more effectively as a result of developed relationships both within and beyond this Church.  At the same time, I recognize that standing for election as Presiding Bishop carries the implicit expectation that one is ready to serve a full term.  I do not at present believe I should serve and lead in this ministry for another nine years.

I believe I can best serve this Church by opening the door for other bishops to more freely discern their own vocation to this ministry.  I also believe that I can offer this Church stronger and clearer leadership in the coming year as we move toward that election and a whole-hearted engagement with necessary structural reforms.  I will continue to engage us in becoming a more fully diverse Church, spreading the gospel among all sorts and conditions of people, and wholeheartedly devoted to God’s vision of a healed and restored Creation.

I will continue in discernment about the ministry I may be called to in the coming years, but my present focus is and will remain on being the vigorous and faithful leader I believe I am called to be.  God has called us all to be instruments of shalom, and we have miles to go before we live in that world of justice and peace.  We are marching upward to Zion, the beautiful city of God.  Siyahamba!

There are no terms limits on the service of a presiding bishop. Jefferts Schori, who turned 60 earlier this year, could have served an additional nine years, had she been nominated and elected.

A presiding bishop is subject to the church’s mandatory clergy retirement age of 72. According to Canon 1.2.2, if a presiding bishop will turn 72 before the end of the nine-year term, then he or she must resign at the General Convention nearest to that birthday.

Presiding bishops serve a nine-year term. The General Convention in 1994 reduced the term from 12 years (via Resolution A130). Twenty-fifth Presiding Bishop Frank Griswold, Jefferts Schori’s predecessor, was the first to serve a nine year term.

Jefferts Schori was elected in 2006 by the House of Bishops during a meeting of General Convention in Columbus, Ohio, and her election was confirmed by the House of Deputies on the same day. She was invested as the 26th presiding bishop of the Episcopal Church on Nov. 4, 2006.

Nominations for the 27th presiding bishop are due to the Joint Nominating Committee for the Election of the Presiding Bishop by Sept. 30. The election will take place during the 78th meeting of General Convention June 25-July 3, 2015 in Salt Lake City. The current draft of the convention schedule shows the election taking place on June 27.

More information about the election process is here.