[Episcopal News Service – Taipei, Taiwan] Members of the House of Bishops have begun learning about the theological context and mission challenges faced by Episcopal and Anglican churches in Asia.

Their exploration had already begun with a deep experience of what Diocese of Kansas Bishop Dean Wolfe described as “such hospitality, such graciousness, such joy in the spirit” on the part of Taiwanese Episcopalians who are hosting the Sept. 17-23 meeting here.

“I will take that back to my Diocese of Kansas and remind my people of the connection we have with the Diocese of Taiwan,” said Wolfe, who is vice president of the house and served as emcee for the Sept. 19 sessions.

Wolfe noted that some members of the Episcopal Church have questioned why the bishops would go to the expense of meeting in Taiwan. “We never think about not going to our farthest parish because it is too far away” or too small, he said. 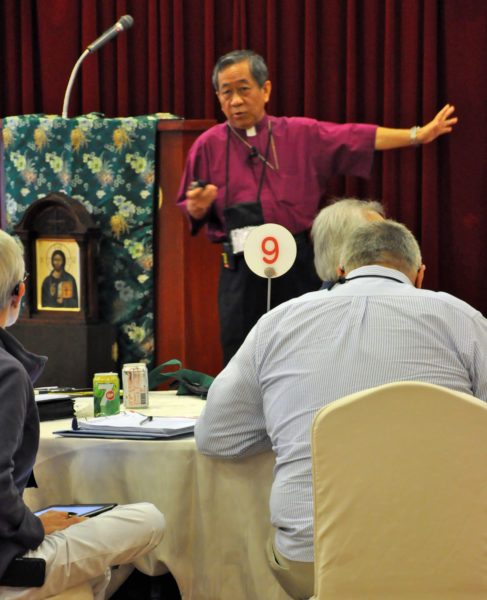 Taiwan Bishop David Jung-Hsin Lai explains to the House of Bishops Sept. 19 how his diocese operates in a country where Christianity is in the minority and many traditional spiritual practices still must be honored. Photo: Mary Frances Schjonberg/ Episcopal News Service

Thus, because the bishops accepted Taiwan Bishop David Jung-Hsin Lai’s invitation to meet here, Wolfe said to applause, they have found that “the Diocese of Taiwan is a much a part of this family as any diocese in the Episcopal Church.”

After fanning out on Sept. 18 to visit three congregations of the Diocese of Taiwan, along with the diocese’s St. John’s University, the bishops came back together on the 19th to learn more about the Taiwanese Episcopal Church as well as Anglican work in Hong Kong and Pakistan.

Taiwanese Episcopalians “started from zero” and now have 20 churches, including seven parishes, Lai said. He acknowledged that his diocese’s ministry is run differently from most other dioceses in the Episcopal Church because of the cultural context of Taiwan. Taiwanese often practice a combination of Buddhism, Taoism and Confucianism. Most of the island’s traditional places of worship combine all three traditions.

Episcopal churches in Taiwan must work within that context, he said. For instance, they use a Mandarin Book of Common Prayer (which took 15 years to translate) and also have a book of supplemental liturgies that frame traditional practices, such as ancestor worship, in a Christian context.

And the diocese actively encourages Christian formation and faith sharing with others. The diocese also helps members discern their ministry, and then actively supports that ministry, often monetarily, the bishop said.

Families often ostracize members who convert to Christianity, Lai said, seeing the conversion as a betrayal. Yet, the bishop urges his members to make their Christian faith evident in their daily lives to counter a common notion in Taiwan that all religions are the same and only “teach us to be a good person.”

“I always remind our church members: ‘don’t keep silence when they say so. If you keep silent it means you agree with their idea. But don’t try to argue with them. You need to build a good relationship.’ So I always encourage them to share your belief – your faith – with them so that they know the God we worship is so different from the god as the idol you worship in your family, in the temple or anywhere.”

Lai said that diocesan members are encouraged not to just believe in and trust in God but also to “do something by your faith” in a way that others, including family members, will see the converted person as others will see “how different, how wonderful, how joyful that you are; you are a Christian, you are a person with a totally new life.”

A summary of the history of the Diocese of Taiwan, which is celebrating its 60th anniversary this year, can be found in this story.

The Rev. Peter Koon, provincial secretary of the Hong Kong Sheng Kung Hui (Anglican Church in Hong Kong), asked for the bishops’ prayers as that province faces the possibility of unrest, perhaps as early as October, by way of the anticipated Occupy Central with Love and Peace, which will campaign for universal suffrage.

Hong Kong return to Chinese sovereignty in 1997 from British control and the laws governing that move say the territory is getting to a system of universal suffrage for picking the chief executive in the 2017 election. Some in Hong Kong worry that the national legislature and the city government will insist on a plan for nominating the chief executive that bars candidates unacceptable to Beijing.

The challenge, Koon said, is how the Anglican churches in Hong Kong can find ways to respond pastorally and theologically to congregations that are divided on the issue.

“Do pray for the cathedral because we are in the hot spot,” Koon said. 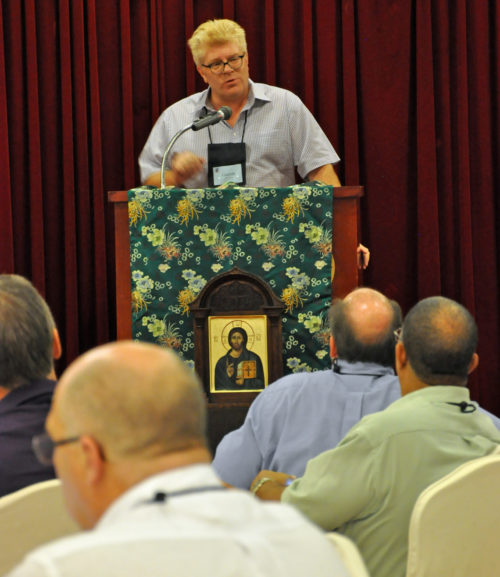 Many seminaries in the Anglican Communion, he said, have “a tendency toward generic theological education with a little bit of Anglicanism bolted onto the end.” Rather than foster what he called the “theological confusion” such a model either evidences or causes, Ming Hua has moved to a model that is more rooted in Anglican identity from the outset and which emphasizes the idea of companionship with God, Jones said.

The model also is based on an understanding that the crises of faith can be seen through the crises in the gardens of Eden and Gethsemane and the seminarians are learning “how to be in Adam and Eve’s shoes and how to be in Jesus’ shoes in those gardens.”

Recent ENS coverage of the ministry of the Anglican Church in Hong Kong is here and here. 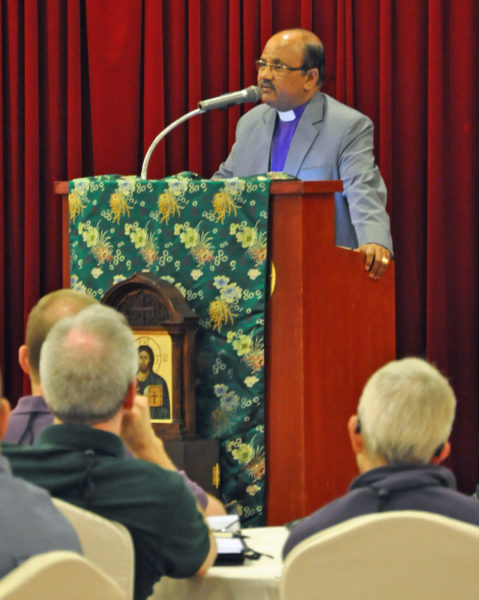 The Church of Pakistan (United) wants a strong relationship with the Episcopal Church, its moderator, Bishop Samuel Azariah, tells the House of Bishops on Sept. 19. Azariah also predicted that the bishops that they and their dioceses will eventually have to pastor to increasing numbers of Muslims in their areas. Photo: Mary Frances Schjonberg/ Episcopal News Service

Bishop Samuel Azariah, moderator of the Church of Pakistan (United), told the bishops about the life of his church in a country where Christians account for 1.5 percent of the 189 million Pakistanis.

He said Pakistan is “in continuous religious disputes” within itself, and with India and Afghanistan.

“The misuse and abuse of religion has not only impacted our economy and our relationships, but has also introduced a phase of religious militancy” and especially one that vows to spread Islam, he said. “That is the reality of the context we live in and very soon this is going to hit you, my brothers and my sisters, even in the United States.”

Azariah added a caution: “I’m not saying that we need to fight Islam; what I am saying is that we need to recognize that reality” and prepare for it by learning about Islam and working to improve interfaith relations, and always searching for reconciliation.

“Islam will be the dominant religion in your own dioceses sooner or later that you will have to negotiate with,” he told the bishops. “You will have large populations of Muslims around you in your areas to whom you will have to pastor to and how will you do that?”

In his context, Azariah said he rejects the ideas of loving one’s enemies, saying instead he prefers to advocate loving one’s neighbors in a way that aims “to recognize, to respect in humbleness and with patience, the quality of otherness that my neighbor carries within himself or within herself.”

Meanwhile, Azariah issued a call for deeper relations between his church and others in the Anglican Communion, especially in terms of educational partnerships and development.

Also on the bishops’ agenda
The theme of the House of Bishops meeting in Taiwan is “expanding the apostolic imagination” and the house is also due to hear from bishops and others from the Anglican Church in Japan, the Philippines and Korea as part of that exploration. However, the approach of Tropical Storm Fung-Wong may disrupt the travel of some of those people, the bishops were warned.

The bishops, spouses, partners and others attending the meeting will spend Sept. 20 sightseeing in various parts of the island. On Sunday, Sept. 21, they will worship at either Church of the Good Shepherd and St. John’s Cathedral in Taipei or Advent Church in Tam Sui. They will return to Taipei in the late afternoon for a session aimed at processing their experiences.

The evening of the 21st will also include a closed fireside chat meant for the presiding bishop and the bishops alone.

While in Taipei, the bishops also are scheduled to receive briefings on the work of the Task Force for Reimagining the Episcopal Church, which recently released a letter to the church outlining the recommendations on structural change it will make to the 2015 meeting of General Convention. Bishop members of the A050 Task Force on the Study of Marriage and the Joint Nominating Committee for the Election of the Presiding Bishop will also discuss the work of those groups to date. The latter briefing will be held in closed session, according to the meeting schedule.

The bishops also plan a town hall-style session with the presiding bishop and a formal business session on Sept. 23.

After the meeting ends a number of bishops are heading to Japan, Hong Kong, the Philippines or Korea to continue learning about mission and ministry of the Anglican Church.