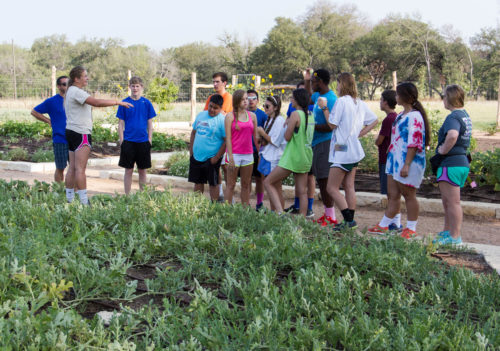 [Diocese of West Texas – Waring, Texas] A visit to the dining hall at Camp Capers could find a table set with linguini con le vongole. Or maybe andouille and chicken creole pasta with peppers, mushrooms, carrots, onion and a blackened Cajun cream. Or even lemony roasted shrimp with butternut squash and edamame sage orzo served with roasted asparagus, grape tomatoes and avocado with Dijon vinaigrette.

That’s for adults. What about the kids?

Stokes is in his fourth year as chef at Camp Capers, the Hill Country camp and retreat center owned by the Episcopal Diocese of West Texas. And since his arrival, he has been creating a wide assortment of menus to please varied palates ranging from preparing 200 meals three times a day for the chicken nugget and pizza crowd of youngsters and teenagers at summer camp to adults attending a spiritual retreat who appreciate a gastronomic delight.

“If they haven’t been to Camp Capers before, they arrive thinking they’re going to get camp type food,” Stokes said. “Instead, we serve them a nice meal, a good sauce, properly cooked veggies. They’re blown away.”

“Farm to table. That’s what people want,” he said. With such temptations, even the teenagers begin breaking down to appreciate better food — more salads, more organics and more vegetables, Stokes said.

Raised on a nearby sustainable farm, Stokes attended culinary school in Austin and then worked at several restaurants before joining the staff at Camp Capers as chief chef. It was a perfect opportunity.

“It’s where I grew up,” he said. “It’s a little more in touch with people. I have a lot of liberty with my menus. I can cook a meal and then see them eat it.”

In addition to summer camp activities, Camp Capers also hosts events throughout the year for groups ranging from Sunday evening dinner parties to December Christmas dinners to even staff meetings for area businesses. Some like what they find and visit “multiple times a year,” even returning with still more groups.

The reason? “It’s cheaper and better food than anybody else provides in the area,” Stokes said.

One German heritage organization requested that Stokes prepare nothing but German food – and left him with rave reviews. “They said it was better than anything they got in Germany,” he said. “We gained three additional bookings just from that group.”

“In fact, all of our bookings have increased and the numbers in the groups have increased. It’s a word of mouth type thing. Camp Capers is kind of like a B&B now,” he said.

A notable addition to the food fare is the supply of fresh organic vegetables such as tomatoes, lettuce, herbs, okra, even edible flowers grown on site in a new garden.

Funded by private donations, the garden was planted in early May. “We held a men’s retreat before the summer programs began,” he said. “We got them to do some planting.”

During the summer months, the kids help out in the garden as summer interns use the garden as a backdrop to connect campers with the outdoors and the spiritual. Plus, they learn that produce doesn’t grow in the local supermarket.

“The garden has so many metaphors,” says camp director David Griffin.

Summer intern Victoria Schnaufer, a natural history and forestry major from Sewanee University, has even invented a game that involves using the garden as a metaphor.

“It’s growing through the phases of my life,” Schnaufer said. “We always go back to the soil. God’s always there to fall back on.”

She also encourages campers to talk to the plants in the garden. “One girl talked to a

watermelon and by the end of the day it was ready to harvest,” she said.

The harvest is utilized in salad bars “to save a little money,” Stokes said. What’s not used is offered to parents for a donation when they pick up their children from camp. Plus, they can also find jars of Stokes’ homemade pesto.

The spring garden is just the beginning, Stokes said. He plans to “go big” with a fall garden, and next year, hopes to organize a cooking from the earth program, focusing on nature, wild plants and edibles.

Another new aspect of Camp Capers is the acquisition of an adjacent 108 acres, more than doubling the size of the 80-acre campus.

“This is truly a historic and significant moment in the life of the Diocese of West Texas,” Bishop Gary Lillibridge said in announcing the acquisition. “These additional acres provide us, and those who will come after us, incredible opportunities to expand our ministries and retreat offerings in many ways, both known and unknown.”

Purchased in the fall 2013, the property is currently being used for primitive camping at nine sites scattered across the property. The sole improvements consist of fire pits built during a men’s retreat.

During campouts, a chaplain leads an outdoor chapel program, though eventually the hope is to build a worship space with log benches, stone altar and perhaps a pavilion. The property is also being offered to other groups such as Boy Scouts seeking a place to hone their outdoor skills.

Bordered by the cypress lined Guadalupe River, the property enables campers to put in a kayak, canoe or tube and float down to the original Camp Capers outpost.

“We’re somewhat bursting at the seams,” Griffin said. “We saw a lot of potential having that retreat area. It was very appealing to us.”

Both Bishop Lillibridge and Suffragan Bishop David Reed credit Camp Campers as helping in their formation as youngsters, and some on the current staff are considering entering the ministry themselves.

“Camp Capers is a very holy place,” Griffin said. “Since the Diocese doesn’t have a cathedral, Camp Capers is kind of the cathedral for the diocese.”