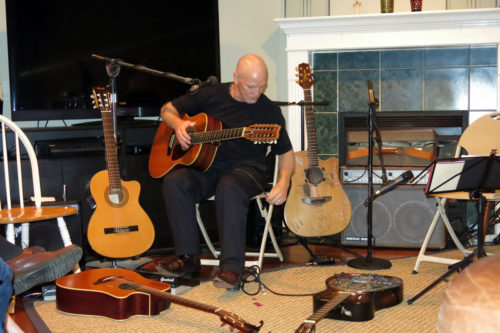 Kirby Kelly, renowned blues guitarist, prepares for a recital with a group of veterans. Photo: Diocese of Texas

[Episcopal Diocese of Texas] Col. Lynn Smith-Henry (ret.) and Kim Perlock, a classical guitarist and educator, weren’t necessarily on the same journey until David Boyd, the rector of St. David’s, Austin, introduced them.

Smith-Henry—also a Lutheran pastor in the Anglican studies program at Seminary of the Southwest—was looking for a way to help veterans with post-traumatic stress disorder. Perlock knew many of her students were veterans who struggled to reengage in a culture of entitlement and abundance following multiple deployments. She wanted to help, and with Smith-Henry, established a guitar therapy class that was grounded in the community of faith at St. David’s. It has offered hope, healing and a way for vets to begin to reenter their lives back home.

“It’s hard to be a 28-year-old veteran and get too concerned about what model BMW some freshman’s parents are buying him,” said Robert, one of Perlock’s students at Austin Community College.

“When you have experienced war you come home a different person,” Smith-Henry said. “It’s just a very different sensibility.”

Learning to trust and even to have normal conversations are adjustments for vets with PTSD, Smith-Henry explained. “Many vets who suffer from PTSD don’t have coping skills to deal with the loss of a friend either as a casualty of war or as a suicide after returning,” he said. “Many have moments of anger that they struggle to control. They had no control over what they experienced during their deployments and that manifests in anger and disassociations with people once they return home. Vets can feel a sense of violation and abandonment and have an inability to communicate.”

The VA recently referred Scott Latham to the group. “Just being together means the most to me,” Latham said. “Music is becoming an outlet for me to get away from the bad stuff in my head,” he added.

Perlock was teaching at Concordia College and Austin Community College when she realized that some of her students responded similarly. She was delighted to find a way to reach them.

The first guitar class began in the spring of 2013 at St. David’s and now gathers weekly at the Armstrong Community Music School for two hours of playing music and additional time for socializing—a part of the program as important as the guitar lessons. “We found a formula that works,” Smith-Henry said, “and we’ve had really good results.”

Margaret Perry has taught music for 40 years and is the director at the Armstrong School. “I know the healing grace of music for people, [especially] for those who have experienced violence it has a unique power to remind us of the goodness and beauty in life,” Perry said. “We understand the neurological benefits of music to help with physical challenges as well as mental focus and memory skills. And, of course, music is a healthy and joyful emotional outlet,” she added. The guitar program, she said, fits well with the school’s values of people bonding as friends and colleagues as much as teaching musical skills.

Perlock recently accepted a position at the Berklee College of Music in Boston, but two instructors with exemplary skills were soon on board to help Smith-Henry. Jeremy Coleman is a Marine veteran and a classically trained music therapist in Austin. Kirby Kelly is a renowned blues musician who plays the slide guitar. Kelly drives four hours from Sherman, Texas, each Sunday to spend the afternoon with the vets and Coleman. The students play all kinds of music, but Kirby and Smith-Henry agree the blues is a great genre for therapy.

“I am particularly interested in healthy coping strategies and the likelihood that a person will implement them,” Coleman said. “We [know] that people’s decision-making is based primarily on learned associations from past experiences,” he added, explaining that a positive music experience increases the likelihood that the vets will implement skills in a meaningful way in their everyday lives.

Outside of class, many vets use the music as part of their personal therapy. When moments of anxiety or anger arise, they can pick up the guitar and go to a “safer” emotional place.

“The real value of passive music therapy is that it’s a great tool for coping beyond a particular moment. You can take it with you and its always accessible,” Smith-Henry said.

Smith-Henry believes the Church has an opportunity to respond to vets with programs like the guitar that began class at St. David’s. He said he was inadvertently called into this ministry because of his personal experience with PTSD. When he began to look at the issues surrounding it, he found many other vets simply were not asking for help. “They weren’t going to the VA and it seemed to me that church was just an easier place to begin,” he said.

Most of the vets in the music ministry don’t have a religious background, but they are curious, Smith-Henry said. The church setting provided a neutral ground and although the classes are not religious, the setting felt safe. “This is a healing ministry,” he said.

“I would like to see more veterans take advantage of the guitar program,” said Dave Summers, a regular member since the group’s founding. “It gives me something to look forward to each week,” he added.

More than a year into the program, people have begun to get together outside of the guitar group. Students have begun to build a degree of trust, and although it was difficult for many to get to that point, “it is amazing to see,” Smith-Henry said.

He has seen other changes as well. The group conversation is deeper, closer to home, he said. The vets feel safe enough to name moments in their lives that are “not so good,” even though specific memories or experiences are often not mentioned. St. David’s has provided space, local guitar shops have donated supplies, and talented musicians have given their time to help heal the warrior. Each step is small, but like notes on a page, when they are all played together, the music is sweet.

The Episcopal Veterans Fellowship is a new initiative in the Diocese of Texas that seeks to follow the 2009 Resolution from General Convention to establish an “Episcopal Veterans Fellowship in every diocese.” The program, so far, consists of practicing ancient, medieval and contemporary healing rituals that enable veterans to find healing and reconciliation after their experience in combat. In the remembrance portion, participants move between the font and the altar, using the sacred space within which veterans may hold the names and memories of those they lost in war before God. The reconciliation portion of the “pilgrimage” recognizes that veterans are sent out from a community to fight, and that they must be received back into their spiritual community through the sacrament of reconciliation. The experience is held in the church and is casual. Veterans are able to connect spiritually to other church members who share their experience of war.

To date, the groups have conducted two Pilgrimages of Remembrance and Reconciliation at St. David’s, Austin and one at Grace, Georgetown. A fourth will be held on September 28 at St. Martin’s-on-the-Hill, Copperas Cove. For more information about the EVF or how to host a Pilgrimage of Remembrance and Reconciliation at your parish, please contact the Rev. David W. Peters, DD. Peters has served as an enlisted Marine and Army chaplain in Iraq. He can be reached at runnermonk@gmail.com or 512.571.4124. Get updates on the EVF at facebook.com/EpiscopalVeteransFellowship.