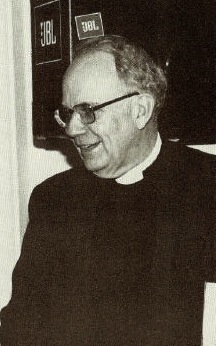 “On this day, I invite this community to remember Dean Reid,” said Dean Markham. “To give thanks to God for his life and to commit afresh to serving the Kingdom as he did. May he rest in peace.”
Born in 1928 and a native of Providence, R.I., Reid earned A.B. (magna cum laude) and A.M. degrees from Harvard University; a B.D. (cum laude) from the Episcopal Theological School, Cambridge, Mass.; and a Th.D. from Union Theological Seminary in New York. He was a member of Phi Beta Kappa and spent two sabbatical leaves studying in England (1968, Cambridge University, 1973, Oxford University). Reid was ordained a deacon in the Episcopal Church June 24, 1955. He was ordained to the priesthood March 24, 1956.
Reid first came to Virginia Theological Seminary in 1958 as a member of the department of New Testament. In 1969 he became associate dean for academic affairs. He served in this capacity until 1982 when he was elected by the board as dean and president, following the 1981 retirement of the Very Rev. Granville Cecil Woods, Jr. During his inaugural address in 1983, Reid outlined several initiatives for the Seminary, including a vision for strengthening the educational ministry of the church.
“This Seminary is strong because of the leadership of those who have come before. Dean Reid is a model of such leadership,” Markham continued. “He gave the most precious gift he could give to this Seminary – he gave years of his life in service.”
Click here to read Dean Markham’s September 8, 2014 Commentary on Dean Reid.