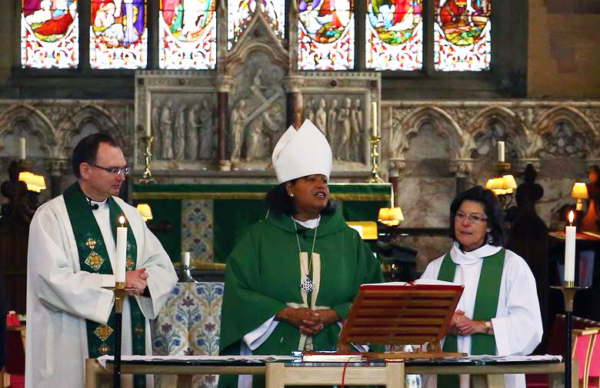 [Episcopal News Service] As the Church in Wales prepares to enable women to become bishops, Bishop Suffragan Gayle Harris of the Episcopal Diocese of Massachusetts became the first female Anglican bishop to preside and preach in a Welsh cathedral.

“The church is not just enriched by women’s ordination, it’s more enabled and empowered by women’s presence,” she told Episcopal News Service during a telephone interview from the U.K. as she prepared for her historic participation in the 11 a.m. Eucharist service on Aug. 31 at St. Asaph Cathedral in Denbighshire, North Wales. “I see women bringing to the fore the desire that all people sit at the table of leadership, that all share in the benefits of the life of God. Nobody should be ignored or left out.”

Although the Church in Wales voted on Sept. 12, 2013, to allow women as bishops, it decided that church law would not be changed for one year to allow the Welsh bishops time to prepare a Code of Practice. The Church of England also made history when its General Synod, meeting last July, approved legislation to enable women to serve as bishops. 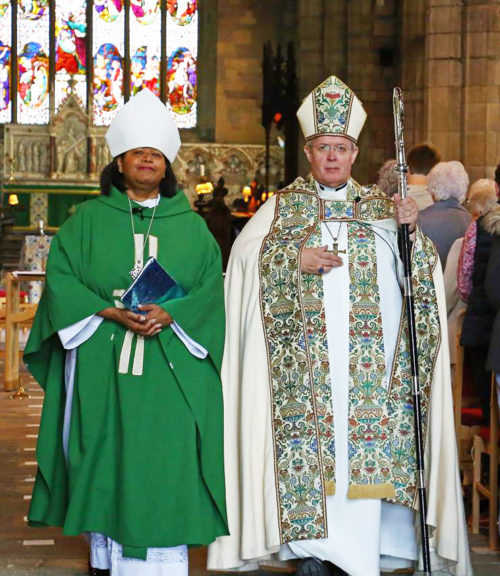 Harris’s visit came at the invitation of Diocese of St. Asaph Bishop Gregory Cameron, who said he’s been surprised at how long it has taken the Church in Wales to take the step to ordaining women as bishops.

“I’ve had significant experience of women bishops around the Anglican Communion, and their ministry is as natural and appropriate as our fundamental membership in the church, male and female,” he told ENS. “In fact, the women bishops I have known have been of exceptional ability and talent. It is precisely because women bishops are not new to the Communion that I’m delighted to have had the chance to invite Bishop Gayle Harris to join us, as we approach the date when women may be elected to the episcopate in Wales.”

But for Harris, the second African-American woman to be ordained a bishop in the Episcopal Church, her arrival in the U.K. didn’t go as smoothly as expected. The U.K. Border Force detained Harris for more than five hours and told her she would have to return to the U.S. even though she had the required paperwork and permissions, including from the Church in Wales and the Archbishop of York.

Despite the ordeal, Harris said that the border officers “were very polite, civil and courteous” and that once they’d discovered that her visit was legitimate, the deportation order was rescinded. “I know that the people at the airport were just trying to do their job,” she said, adding that the head officer of the U.K. Border Force offered her a personal apology for the detention being so long.

Harris was relieved to put the experience behind her and focus on the planned itinerary and upcoming celebrations.

Harris already had plans in place to visit the U.K. — to officiate at her goddaughter’s wedding — when she was invited to send a greeting to Crossing the Threshold, a conference celebrating the law change to enable women to become bishops.

She will attend the Sept. 4 conference in Cardiff and retired Bishop Geralyn Wolf of Rhode Island will participate as a keynote speaker.

The Episcopal Church became the first Anglican Communion province to open the episcopate to women by an act of General Convention in 1976, although it would be another 13 years until the Rt. Rev. Barbara Harris – Bishop Gayle Harris’s predecessor in Massachusetts – is ordained as its first female bishop in 1989. Last July, the Episcopal Church celebrated 40 years since the first women were ordained as priests. Yet the majority of Anglican Communion provinces still do not ordain women as bishops.

“There are places where we may not see women ordained to the episcopacy in our lifetime or even in the next generation but I believe God can call whoever He wants to call; male or female, black or white,” said Harris. “Sometimes it is hard for us to hear and discern that call and that’s why it takes longer in some places than others.”

Bishop Gayle Harris was ordained to the priesthood in 1982 and elected as bishop suffragan of Massachusetts in 2002. That journey, she said, has had its ups and downs, but she has been sustained throughout by the presence of God. 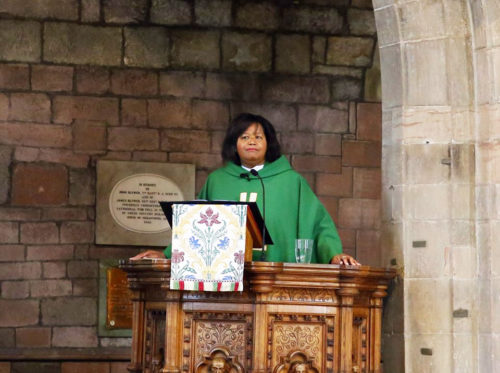 During her sermon at St. Asaph’s Cathedral, Harris spoke about being a follower of Christ and explained that discipleship isn’t easy and involves personal cost.

As the first black woman to celebrate mass in an upstate New York church in the early ‘90s, Harris received various reactions, both positive and negative. “No one in that parish had ever seen a woman in that sanctuary, but they took the risk to call me as rector” of St. Luke and St. Simon Cyrene Church in Rochester, New York, she said.

“During the first Sunday I chose not to celebrate but to sit among them to get to know them,” she added. Some parishioners said that they were not going to come back, Harris said. Fortunately, most did, including some dissenting parishioners who later admitted “it was not as bad as they had expected.”

“What’s important is the presence of God,” Harris said. “I am first and foremost created in the image of God. No one can deny that is my identity. But all of my experience of negative response is not over. I have been held as incompetent because of who I am as a black woman. That continues. I still think that this world has to deal with the difference of skin color. We keep bypassing that issue. As a black woman, sometimes I have to ask is it because I am a woman but most of the time it is because I am black and a woman. The race issue has not been dealt with.”

Harris said she is grateful to Cameron for his invitation to St. Asaph’s. “It says a lot about him and how gracious he is. But I see this as another opportunity to engage and encounter the other,” she said. “I believe God is in this moment.”