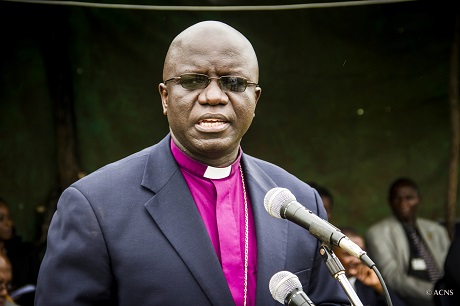 Archbishop Albert Chama emphasizes the need to foster unity across the province and working towards one common goal. Photo: Bellah Zulu/ACNS

[Anglican Communion News Service] The Most Rev. Albert Chama, primate of the Church of the Province of Central Africa (CPCA), has emphasized that self-sustainability and unity remain top priorities for the church.

“As a transnational province, we’re encouraging investments in the various countries to make sure that the national churches and subsequently the province is self-sustainable,” the archbishop said in an interview with ACNS at the Zambia Anglican Council (ZAC) offices in Lusaka shortly before chairing a meeting with the Zambia bishops to discuss the sustainability of the church.

“As a province, we’re coming up with various programs, such as training workshops and conferences, to make sure that everyone, including bishops, clergy and laity, especially the youth, get involved in the development and growth of the church and other aspects of church life.”

Chama said resources raised from the different activities and investments will be used to improve missions across the province. However, he also acknowledged the different stages of economic development of the countries making up the province: Zambia, Malawi, Zimbabwe and Botswana.

“The Church in Zambia for instance needs to do more in the area of investment and only then will it become easy to do various missions and grow the church,” he said. “But we continue to share best practices from the dioceses and parishes across the province so that we can learn from one another and grow together.”

The archbishop emphasized the need to foster unity across the province and working towards one common goal. “A bigger family means a bigger voice,” he said. “CPCA has been able to contribute immensely to the global Anglican Church because of the unity we enjoy.”

Chama spoke of how the province was able to help the church in Zimbabwe during the persecutions endured by the Anglicans there when excommunicated former bishop Nolbert Kunonga and his supporters grabbed church properties.

“Provincial unity is crucial because when one part is affected, we’re all affected,” he said. “When Zimbabwe had challenges, the province came in and helped where it could.”

He added: “It is because of the unity we enjoy that our Episcopal Synod even resolved to invite [the Anglican Consultative Council] to Lusaka, Zambia within our province. We believe it’s because of this unity that we strongly feel the need to share with the Anglican Communion.”

However, the archbishop emphasized that for unity to be promoted and upheld, there was need for consistent communication and sharing of information both within the province and the rest of the Anglican Communion.

“Information needs to be shared on the best practices of evangelism and other aspects of church life that can help transform ministry,” he said. “We also need to keep learning from each other on how we can appropriately contribute to the socio-economic development of our countries.”

Chama reiterated the importance of church leaders “leading by example.”

“When people see a leader in the forefront advocating for a cause or even involving themselves in activities, they see the seriousness of that activity.”

The Anglican Church in Zambia has been brainstorming various areas of possible investments including an ambitious plan for a housing project that could help the Church’s finances in the long term.