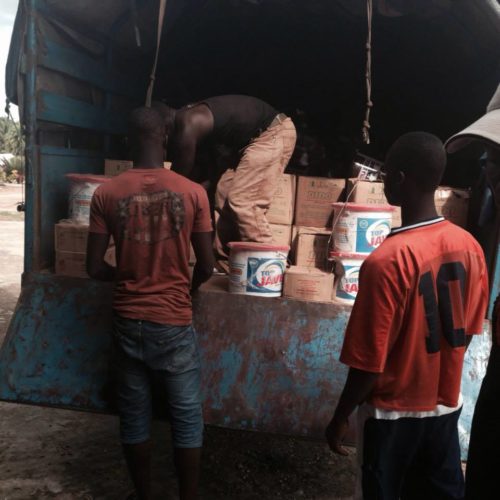 Members of the task force leading the Ebola response unload supplies in Bong County, Liberia. Photo: Courtesy of the Episcopal Diocese of Liberia

[Episcopal News Service] Liberia’s Cuttington University, located near one of the epicenters of West Africa’s Ebola outbreak, is reaching out to its surrounding communities while worrying about the epidemic’s impact on the now-closed school’s future, and mourning the loss of graduates and friends.

Meanwhile, throughout Liberia and Sierra Leone, Episcopal Relief & Development is in regular contact with local church partners who “are leveraging their widespread presence and trusted reputation to alleviate suffering and contain the Ebola outbreak” that has killed at least 1,427 people in West Africa since March 2014, according to an Aug. 27 press release.

Partners in both countries are mobilizing local volunteers to promote accurate information about Ebola and distribute hygiene and sanitation supplies, while the Episcopal Church of Liberia is supplying food parcels for households in quarantined communities and providing basic protective equipment for health workers at local hospitals, Episcopal Relief & Development reported. 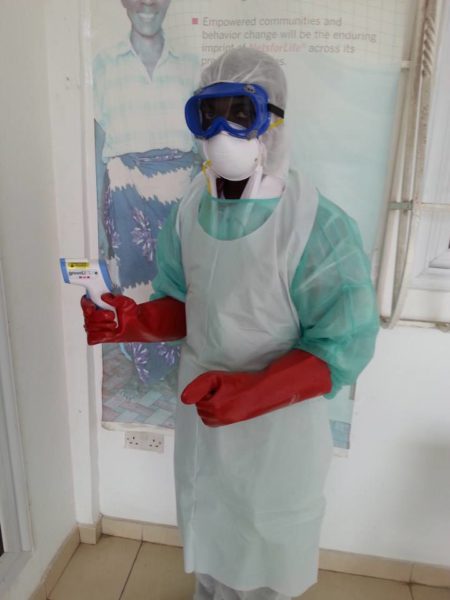 Abiy Seifu, senior program officer for Episcopal Relief & Development, described the situation as “extremely dire,” due both to the severity of the disease and the difficulty in containing it. “People want to care for sick family members at home, they are afraid to go to the clinics because so many are dying and there is a great deal of misinformation about how Ebola is spread. Fear about the disease is making the outbreak worse, and we are aiming to combat this fear with accurate information and support for basic needs.”

Development staff members of the Episcopal Church of Liberia are working with government health leaders in Bong County to distribute food items such as rice, cooking oil and canned meat in four quarantined rural communities, the agency reported.

Cuttington University’s main campus in the interior of the central region of Liberia is about six miles from Gbarnga, the capital of Bong County. Cuttington, founded in 1889 in Liberia by the U.S.-based Episcopal Church, has two other campuses, one in the country’s capital, Monrovia, and another nearly 45 miles south of Monrovia.

The university is home to the largest nursing school in the country and, because it offers the country’s only bachelor’s degree in nursing, many of its graduates work in critical care situations. Many aspiring doctors take the university’s bachelor’s in biology to use to make the pre-requisite of the country’s only medical school, A.M. Dogliotti College of Medicine and Cuttington grads make up the largest portion of Dogliotti students.

“This link between Cuttington and the medical community is real and is causing us great anguish,” Cuttington President Henrique Tokpa wrote in an Aug. 25 letter. “We know the people involved in this epidemic and we sympathize with their families.”

The first medical worker in Liberia to die from Ebola was a 2012 graduate of Cuttington’s nursing school, Tokpa wrote in the letter to the Rev. Ranjit Matthews, the Episcopal Church’s network officer for global relations and networking. The nurse, whom Tokpa referred to as Mr. Daah, was working in the hospital in Foyah in northern Liberia.

A practicing medical doctor at the Phebe Hospital – a Lutheran hospital located near Cuttington’s main campus and the nation’s largest public health institution – who also teaches part-time in the College of Allied Health Sciences at Cuttington unknowingly contracted the Ebola virus and at the same time interacted with the Cuttington University’s nursing students, the president said.

“Along these lines, Cuttington University remains exposed to this deadly epidemic, Ebola, and its attendant effects,” Tokpa wrote.

The president gave five examples of students, alumni and staff who have died, including “Kwee,” a former employee who died along with his wife and son.

Henry Callendee, dean of Cuttington’s School of Education, has lost at least 12 of his family members who live in a now-quarantined town in Lofa County, according to Tokpa.

At first, not much attention was paid to the outbreak when it was in neighboring Guinea and Sierra Leone “because we did not anticipate the violent nature of the Ebola virus,” Tokpa wrote in the letter.

But by mid-July, with the university’s “vacation school” still operating, Tokpa said “we immediately began to sense that the situation was spiraling out of control so we took some immediate measures,” including placing around campus buckets of chlorinated water with spouts to encourage hand washing.

The staff invited doctors and the head of a Bong County Ebola task force to campus gatherings to educate students, faculty, staff, and community members about the virus and how to protect themselves. Officials “began to strategize about school closure” and worked out ways to send students home with ways for them to finish the work of the term, Tokpa said.

And the university has donated more than 150 gallons of gas to help run vehicles for people assigned to bury the dead and respond to calls for aid from “live victims,” Tokpa wrote. Vegetables from the school’s garden have been donated as well as buckets for use as hand-washing stations in communities that cannot afford to buy their own.

As school officials were planning how to shut down the vacation term, the Liberian government ordered all schools to close as part of an effort to stem the spread of Ebola. Cuttington had hoped to reopen in September or October, Tokpa said.

The university is dependent on the tuition charged to students to pay its employees. Those employees have not been paid for June, July and August, and face the prospect of not being paid in the near future, the president said in another document he sent to Mathews.

Plus the university will have to disinfect all of its buildings, according to Tokpa. With 3,000 students expected eventually to return, the university must remain on alert when the epidemic subsides and schools can re-open, he added.

Cuttington’s partners at Rutgers University in New Jersey are supplying some basic support to the university and Phebe Hospital in Bong County, he said.

“We have to remember that these communities in West Africa now struggling with Ebola have only emerged in recent years from more than a decade of civil strife,” the Rev. Canon James G. Callaway, general secretary of the Colleges and Universities of the Anglican Communion and treasurer of the American Friends of Cuttington, told ENS. “This is the second time that Cuttington University has reorganized itself to address its community’s needs. As the Liberian civil war was just ending Cuttington opened its campus to retraining former combatants for new livelihoods as they are now marshaling resources to overcome Ebola.  As educators they are showing that leadership starts with service.”

As of Aug. 22 the United Nations’ World Health Organization said there have been 2,615 suspect and confirmed Ebola cases, including 1,528 laboratory-confirmed cases, and 1,427 deaths in Guinea, Sierra Leone, Liberia and Nigeria. WHO claims that the magnitude of the Ebola outbreak may have been underestimated, due in part to families hiding infected loved ones in their homes.

The Ebola outbreak is unprecedented in many ways, according to the World Health Organization, including the number of health care workers who have died. More than 240 health care workers have developed the disease in Guinea, Liberia, Nigeria, and Sierra Leone, and more than 120 have died, the organization said on Aug. 25.

“Ebola has taken the lives of prominent doctors in Sierra Leone and Liberia, depriving these countries not only of experienced and dedicated medical care but also of inspiring national heroes,” the WHO statement said.

The organization said many of the deaths occurred among workers who initially did not know that the person they were treating was infected with Ebola, in part because many health workers, especially in urban areas, have never seen the disease and its early symptoms are similar to other infectious diseases endemic in the region, like malaria, typhoid fever and Lassa fever.

Factors contributing to the high number of deaths also include shortages of personal protective equipment or its improper use, far too few medical staff for such a large outbreak, and “the compassion that causes medical staff to work in isolation wards far beyond the number of hours recommended as safe,” the organization said.

“Some documented infections have occurred when unprotected doctors rushed to aid a waiting patient who was visibly very ill,” the WHO statement said. “This is the first instinct of most doctors and nurses: aid the ailing.”

WHO reported on Aug. 27 that Ebola had broken out in the Democratic Republic of Congo. The outbreak in Equateur Province has been traced to a pregnant woman from Ikanamongo Village who butchered a bush animal that had been killed and given to her by her husband. Eating bush meet is seen as a major way the virus moves from animals to humans.

In Sierra Leone, the Anglican Diocese of Bo is actively participating in the government District Health and Development Team’s planning and implementation process for Ebola control, specifically on detection and case management, Episcopal Relief & Development reported.

“Some of the biggest challenges in stopping Ebola come from hiding sick people and treating them at home rather than seeking isolation and medical assistance, patients escaping quarantine and burial practices that do not contain the disease,” said Episcopal Relief & Development’s Seifu. Culturally appropriate messaging and case management are essential in encouraging communities to adopt behaviors that will effectively combat Ebola,”

The agency reported that it is currently in conversation with both the Episcopal Church of Liberia and the Anglican Diocese of Bo in Sierra Leone regarding expansion of activities to reach remote communities and longer-term engagement to address the growing food crisis.

“Restrictions on transportation and commerce due to quarantine are already causing shortages, but there may be a longer-term impact on livelihoods and food supply due to lack of market access and missed planting seasons,” according to the agency’s Aug. 27 press release. “In addition, families whose main breadwinner has fallen ill or died are particularly vulnerable.”

Seifu said that one of the key strengths of church partners is that “they can access areas that might be difficult for other organizations or even the government to reach. I am very glad that the local government agencies have recognized this strength and that they can pool resources and expertise to implement a unified strategy. This partnership is important now and will continue to be as the region recovers from this disaster.”