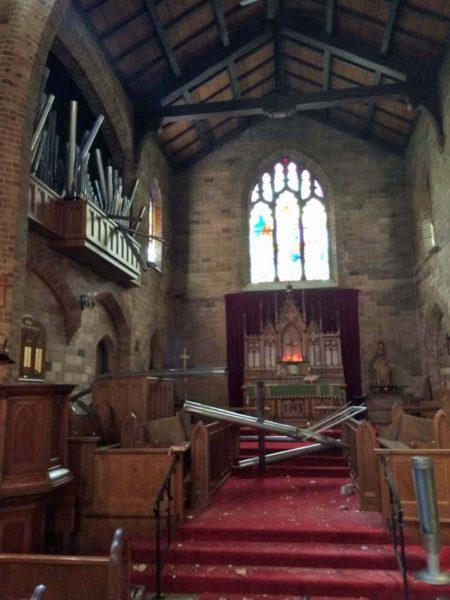 [Episcopal News Service] While the outside of St. Mary’s Episcopal Church in Napa, California, looks perfect after the Aug. 24 magnitude-6 earthquake, the inside of the church is a different matter.

Organ pipes litter the chancel floor while others hang precariously from the organ loft, some bent like drinking straws. Right after the quake at about 4 a.m., when the Rev. Stephen Carpenter, St. Mary’s rector, and his daughter came to the church with flashlights to check for damage, all of the pipes were still in the loft.

However, Carpenter told Episcopal News Service, “gravity or aftershocks or both took over” and some of the pipes later spilled out. The 27-rank Casavant organ was installed in the 1990s, according to Carpenter.

The most serious concern, and the reason the rector said the building is red-tagged, are the visible cracks and apparently missing parts of brick and mortar in a gothic stone arch 40 feet above the pulpit and lectern. It is not clear if the damage is cosmetic or structural, Carpenter said, and that will not be determined until a structural engineer can inspect the arch.

Meanwhile, the congregation will worship Sunday in the parish hall. Many of the members are used to that since they spent five months worshipping there back in 1999 while the church was undergoing a seismic retrofit. Carpenter noted that just less than a year after that retrofit was finished in October 1999 a magnitude-5.2 temblor hit on Sept. 3, 2000, and the church came through unscathed. 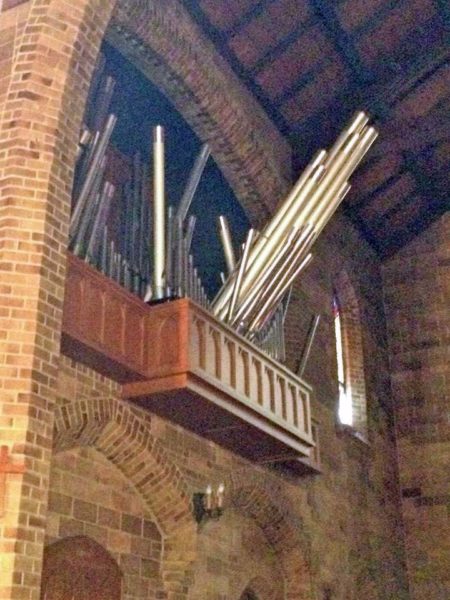 Just after the Aug. 24 earthquake, the pipes were still in the organ loft, however precariously. Either gravity or aftershocks or some combination of those forces sent some pipes tumbling to the chancel floor. Photo: St. Mary’s Episcopal Church via Facebook.

The Aug. 24 quake caused a lot of damage inside the church. “I don’t even have a book shelf to put my books back into,” Carpenter said of his office which was littered with pieces of fallen bookcases.

Parish members have shoveled up the pieces of every single dish in the kitchen after the quake spilled them out of the cupboards.

Back in the church, a mosaic of the Holy Spirit that had hung over the baptismal font since 1954 came off the wall. One large piece was found covering the font and the rest is in pieces on the floor of the nave. A Madonna statue on the church’s Mary Altar also broke when the shaking sent it tumbling to the ground.

Carpenter, who has been St. Mary’s rector for 31 years, said the house that he and his wife, Fran, live in is a mess, too. He filled a large garbage can with pieces of pottery, china, crystal and antique clocks. A grandfather clock that belonged to his grandfather is in two pieces.

A Napa native, Carpenter lost many family members in an airplane crash in the 1970s and, he said, many of the things destroyed in his home were “memories of my family.”

As they cleaned up the house, “we kept saying ‘it’s only stuff,’ but it’s still sad,” he said.

A 60-year-old mosaic of the Holy Spirit fell off the wall and broke apart on the baptismal font. Photo: St. Mary’s Episcopal Church via Facebook

The only St. Mary’s parishioner apparently injured during the quake was an elderly woman who had gotten out of bed just before the temblor struck. She fell to the floor, breaking her hip. Carpenter said the woman is now recovering from surgery.

The magnitude-6 quake struck at 3:20 a.m. PDT about five miles south-southwest of the city of Napa. Napa boasts a large number of Victorian-era buildings and is one of the centers of Northern California’s wine country.

The quake was felt widely throughout the region, from more than 200 miles south of Napa and as far east as the Nevada border, the Associated Press reported.

There were numerous aftershocks in the hours after what is being called the South Napa Quake, with four of them measuring 2.5 or more having struck by 8 a.m. PDT on Aug. 24.

St. Mary’s parish, built on the corner of Third and Patchett streets in 1931, was originally known as Christ Church, dates back to 1858 and was once located a few blocks to the east near First United Methodist and First Presbyterian churches. Those two churches were more heavily damaged in the quake. Video damage in Napa shot from a drone shows damage to First Presbyterian Church at the 2:16 mark and the damaged First United Methodist building at 2:46 here.

The quake was the largest to shake the San Francisco Bay Area since the magnitude-6.9 Loma Prieta quake struck in 1989, collapsing part of the Bay Bridge roadway and killing more than 60 people, most when an Oakland freeway fell. The quake hit during the afternoon rush hour just after 5 p.m. local time.

“Our chandeliers were all swinging in unison” during Loma Prieta, whose epicenter was on the Pacific Coast about 115 miles south of Napa, Carpenter said. 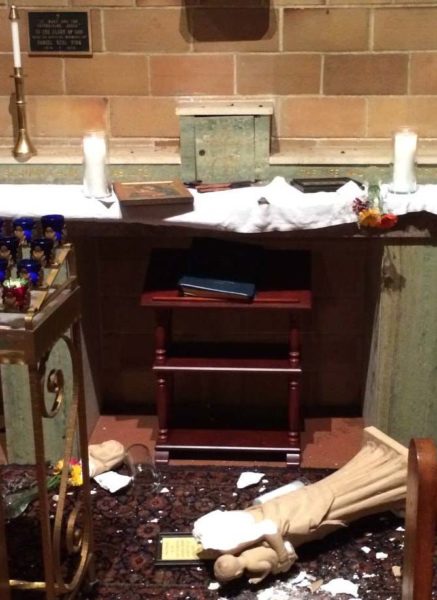 No one was killed in the Aug. 24 quake and the City of Napa said on Aug. 25 that 208 people were treated at Queen of the Valley Medical Center in Napa with 17 admitted.

The city said on the morning of Aug. 27 that 113 buildings had been red tagged, indicating that they are unusable or uninhabitable due to damage from the quake, and approximately 500 have yellow tags, meaning that caution is required in those buildings.  The “initial gross estimate” of damage to privately owned homes and commercial structure in the city is $300 million, not including inventory and other economic losses. The estimate, the city, also does not include public buildings or infrastructure.

Many people have been helping businesses in the heart of the Northern California vineyards get cleaned up before dealing with their own home, Carpenter said. he recalled seeing people helping out the owners of an olive oil and balsamic vinegar store in downtown Napa where so many bottles had broken that oil was running out the front door, across the sidewalk and into the gutter.

“Disasters have a way of bringing out the best or the worst in people,” he said. “Most often it shows people’s humanity.”

The quake struck just as “crush,” the wine harvest, was beginning. Crush is a major tourist event as well as the normally exciting finish to the growing season with the anticipation of what this year’s vintage will be like, but now “there’s just like a cloud over everybody,” Carpenter said.

“But, we’re moving forward,” he added.

A television interview with Carpenter by the ABC affiliate in San Diego is here.