[Episcopal News Service] What is being called “a daily office for the 21st century” is now available to members of the Episcopal Church and beyond. 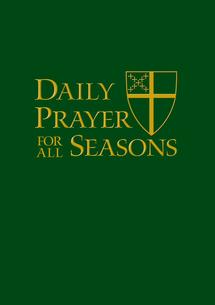 “Daily Prayer for All Seasons,” developed by the Standing Commission on Liturgy and Music offers a variation on the Book of Common Prayer’s tradition of prayers for morning, noon, evening and nighttime.

The books are divided by the liturgical year, and each of the services for each of the eight canonical hours of the day has a theme, including praise, discernment, wisdom, perseverance and renewal, love, forgiveness, trust and watch. A complete service covers one or two pages.

The prayer book presents a variety of images of God, uses inclusive and expansive language for and about God, and presents a rich variety of language, including poetry, meditation and prayers from the broader community of faith, according to a press release. Clergy, teachers and spiritual leaders across the Episcopal Church contributed to the work.

“These prayers will help you pray at all times and find the right words when necessary,” the Rev. Mark Bozzuti-Jones, a contributor to the volume who serves as priest for pastoral care and community at Trinity Wall Street, New York, said in the release. “In their diversity, these prayers are manna from heaven for folks who are seeking new and creative ways of prayer. This book will teach you how to pray.”

The Rev. Gay Clark Jennings of Ohio, president of the House of Deputies, said she is “grateful to the leaders from across the Episcopal Church who have collaborated on this important new set of prayers for everyday life.”

Some of the prayers are being used during Nuevo Amanecer, a churchwide gathering of Latino/Hispanic members of the Episcopal Church, at the Kanuga Conference Center in North Carolina.

Work began in April 2007 on what eventually became known as “Daily Prayer for All Seasons,” according to the Standing Commission on Liturgy and Music’s report to the 76th meeting of General Convention (page 187 here) in 2009.

The next meeting of convention in 2012 approved the book (via Resolution A055) and it has now been published in English and Spanish in various formats by Church Publishing Inc. It is available in print and in eBook versions including Kindle, iBook and Nook formats. The print volume can be imprinted with a recipient’s name. Soft cover and leather-bound editions are available. A 37-page sampler from the book is here.