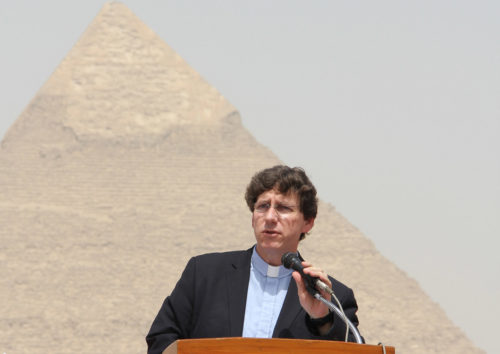 [CARAVAN press release] Rev. Canon Paul-Gordon Chandler, a mission partner with The Episcopal Church and the former Rector of St. John’s Episcopal Church in Cairo, Egypt from 2003-2013, has assumed the role of President/CEO of CARAVAN, an interfaith arts non-profit (501c3) that seeks to “build bridges through the Arts between the creeds and cultures of the East and West.” CARAVAN started as an interfaith arts movement out of Cairo and became a non-profit organization based from Chicago this last March 2014. CARAVAN brings together many of the Middle East’s premier artists, with noted Western artists, to build respect, increase understanding and encourage friendship between the Middle East and the West. One of the flagship initiatives of CARAVAN is the globally recognized CARAVAN Exhibition of Visual Art. Each year this unique exhibition has garnered attention from the international press, media and art world, attracting thousands of visitors. In 2013, many thousands of Middle Easterners and Westerners viewed CARAVAN’s public art exhibition of painted donkeys (symbolizing “Peace and Compassion”) by premier artists from the Middle East and West, first throughout Cairo, followed by an estimated 120,000 people visiting CARAVAN’s exhibition in London, England at the world renowned St. Paul’s Cathedral. The 2014 CARAVAN Exhibition of Visual Art opens in late August at National Cathedral in Washington D.C. (August 30-October 6) and involves 48 premier and emerging Egyptian and Western artists (of Muslim, Christian and Jewish backgrounds). Titled “AMEN—A Prayer for the World,” the exhibition seeks to express the deep, fundamental human acknowledgement of power and hope in the universe, for all peoples. This major arts initiative is an aspirational expression of hope and goodwill for the peoples of the Middle East and the rest of the world. Following the exhibition in Washington D.C. it will move to the Cathedral of St. John the Divine in New York City (October 12-November 23).