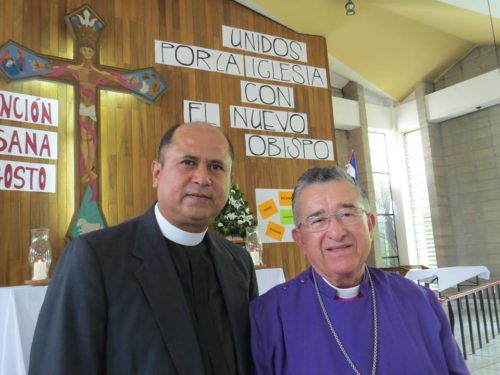 [Episcopal News Service] The Rev. Juan David Alvarado was elected bishop of the Anglican-Episcopal Church in El Salvador on Aug. 23 at St. John the Evangelist Church in San Salvador.

His consecration/installation is scheduled for Jan. 24, 2015.

Alvarado, 52, will succeed the Rt. Rev. Martín Barahona who is retiring.

Elected in 1992, Barahona became the first Salvadoran to serve as bishop. Prior to Barahona’s election and the end of El Salvador’s 1980-1992 civil war, then-Bishop of Panama James H. Ottley oversaw the church in El Salvador from Panama.

Alvarado was elected from a slate of five candidates, including two North Americans.

The other candidates were:

Alvarado was elected on the second ballot with 35 of 50 lay votes and 8 of 14 clergy votes.

The bishop-elect is married to the Rev. Irma Alvarado; the couple has two children.