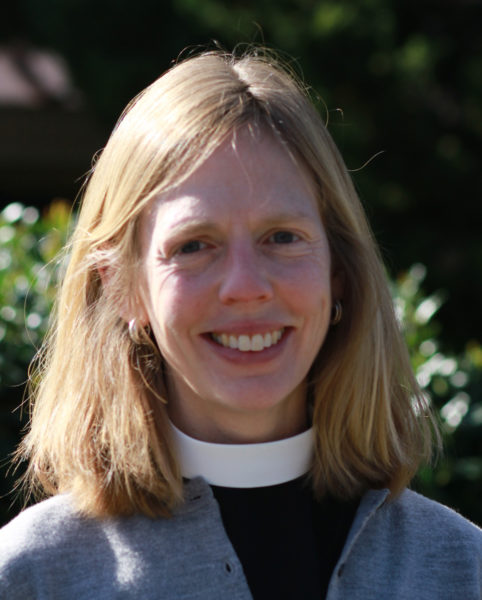 St. Michael’s Episcopal Church, which has occupied the same location on Manhattan’s Upper West Side since its founding in 1807, has called the Rev. Katharine G. Flexer to be its 11th Rector — the first woman to hold the position.

Flexer is a native of the Seattle area and a former associate rector at St. Michael’s. Since 2011 she has been Rector of the Episcopal Church in Almaden (ECA) in San Jose, California.

“St. Michael’s became a part of me when I was there,” Flexer said. “I hope to increase the church’s presence in the neighborhood. Our mission is to serve God in the community.”

“Kate’s shining qualities as a priest and as a person were uppermost in our minds as we made this decision,” said Michael Smith, one of the wardens of the parish. “But it has not escaped our notice that we have also made a bit of very pleasing history in calling the parish’s first woman Rector.”

The appointment followed an extended search that drew applicants from across the U.S. and abroad.

Flexer is joined by her husband Jim Hinch, a journalist who covers religion for the Orange County Register and other publications, and their children Frances and Benjamin, who were born in New York City during the family’s earlier stint at St. Michael’s.

Flexer is an avid runner who has twice completed the Boston Marathon. She and her family share a passion for hiking and camping in the backwoods.

Flexer graduated Phi Beta Kappa from Whitman College in Walla Walla, Washington, with her junior year abroad at Strasbourg University in France. She earned a master of divinity degree from the Church Divinity School of the Pacific in Berkeley, California, and took part in a postgraduate study exchange at Ripon College Cuddesdon in Oxford.

Flexer is known for her gifts as a preacher, pastor and educator, with a special talent for bringing the next generation into parish life – from children to young adults. For three summers she has co-led the Family Camp of the Diocese of California.

At St. Michael’s, Flexer helped create a successful Sunday evening service to engage the unchurched, the lapsed and anybody who prefers an alternative style of worship.

In Almaden, Flexer led a drive to engage her congregation in the life of the community beyond the church walls, using the tools of broad-based community organizing. Working with a local organizer from the Industrial Areas Foundation (IAF) and other colleagues in the area, ECA began to deepen relationships and develop leadership in the congregation while building connections with other institutions around common interests.

“All those skills complement her new role at St. Michael’s and help us to strengthen our outreach,” noted Kris Ishibashi, one of the wardens of the parish.

Among the parish’s community ministries are its Saturday Kitchen (open since 1983) and the Pilgrim Resource Center, which serve hundreds of guests every weekend, and a relatively new program, Careersearchers, a job-search support group.

St. Michael’s also helps support a ministry to families in need at nearby Trinity Lutheran Church, and members of the parish prepare meals for residents of Trinity’s shelter for homeless LGTBQ youth.

St. Michael’s occupies a campus of three 1890s-vintage buildings: the church itself, the parish house and the rectory. Louis Comfort Tiffany created the church’s seven stained-glass windows (more than a story high) surrounding the apse, as well as the reredos in the Chapel of the Angels.

A reconsecrated altar in the north end of the sanctuary came from St. Jude’s Chapel, founded in 1909, a ministry of St. Michael’s to the African-American community on West 99th Street, until the chapel was destroyed by a midcentury “urban-renewal” project.

Music plays a very significant role in the life of St. Michael’s, during services and in community performances. The church maintains four choirs, from young children through adults, and holds two organs by the well-known builder Rudolf von Beckerath.

Flexer returns to a parish of more than 600 individuals from more than 300 households whose demographics reflect its diverse neighborhood.

Since 1852 the church has operated St. Michael’s Cemetery in Queens, open to people of all faiths, or none. Annual observances at the historic Cemetery include a concert honoring composer Scott Joplin, who is buried there; a remembrance honoring police, fire and first responders during the 9/11 attacks; and a fundraiser to support children of those who died from working on the World Trade Center cleanup.

St. Michael’s fortunes have always been linked to those of its neighborhood. The church archives record that during the 1960s the once-thriving parish was so precarious that the Bishop of New York considered closing the church and selling the cemetery. The parish rebounded in the late ‘70s and ‘80s.

Flexer’s rectorate begins a new era at an old but lively church. She will take up her duties on Dec. 14, the third Sunday of Advent.