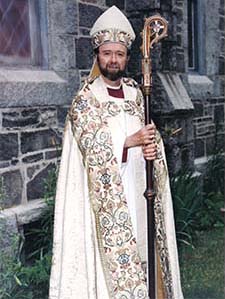 The Rt. Rev. Andrew Frederick Wissemann, the sixth bishop of the Diocese of Western Massachusetts

[Episcopal News Service] The Rt. Rev. Andrew Frederick Wissemann, the sixth bishop of the Diocese of Western Massachusetts, died peacefully at home early on the morning of Aug. 20.

“Bishop Wissemann served the people of this diocese with clarity of purpose and compassion during his eight-year episcopate,” said current Bishop Douglas Fisher in announcing the death.

“A soft-spoken, self-effacing, scholarly man whose genuineness and sympathy were immediately apparent to all, he was, by gift and temperament, more inclined toward the pastoral model of a bishop than the lordly,” wrote diocesan historian Richard Nunley in Fisher’s statement.

Wissemann, 86, was elected as Western Massachusetts’ bishop in 1983, was consecrated in 1984 and served until 1992. He had been the rector of St. Stephen’s in Pittsfield for 16 years when he was elected and he also extended pastoral care to St. Martin’s in Pittsfield and St. Luke’s, Lanesboro, according to Fisher. Wissemann also served the diocese in the department of finance and administration. He was also rector of St. James, Greenfield from 1960-1968 following seven years with churches in the Diocese of Connecticut.

The bishop was ordained a deacon in May 1953 and was priested in December of that year.

“The life of any bishop cannot be adequately measured by a list of achievements, though Bishop Wissemann had many. The only measure is the standard of the Gospel and Bishop Wissemann proclaimed the Good News in word, in deed and in the example of Christian family life,” Fisher wrote. “Our hearts go out to Andrew’s wife, Nancy, who has been partner to his mission and ministry for 61 years, to his son, his three daughters, and his five grandchildren. It was my privilege to enter the sacred space of his dying last night to pray with him and his family in their vigil of hope and faith.”