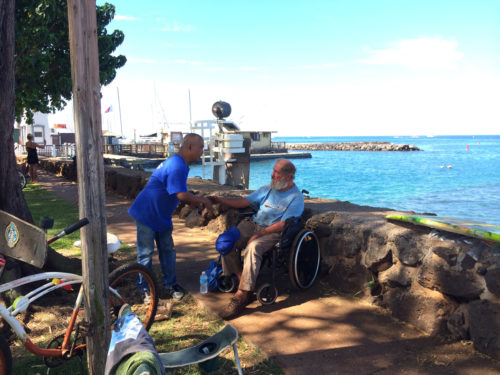 Nearing a small encampment of several cars and trucks sheltered by trees and bushes, Lawrence Kauhaahaa carefully maneuvered the van to a stop. He tapped the horn lightly as his mother, Juanita Kauhaahaa, 75, threw open the van’s sliding door and called out: “A Cup of Cold Water!”

Along with grandson Joseph, 18, she bagged canned meat, fruit cups, cheese crackers, pop-top puddings, granola bars and other snacks to hand out as a line quickly formed at the door. Other brown paper sacks were filled with personal and first aid items: toothpaste, toothbrushes, mouthwash, Band-Aids, lotion, and soap and – because of the extreme July heat – cold water, lots of water.

“I haven’t seen you for awhile. I wondered where you’d gone,” Juanita called out to a family whose two young children perch inside the van. In return, a young man offers her a box of almost-ripe bananas with a simple request to “spread them around.”

“Everybody shares what they have,” said Lawrence Kauhaahaa, a retired 20-year veteran of the Maui police department who considers the once-monthly Wednesday morning run a family affair. And it’s not just because three generations of his family participate together. They have come to know many “uncles” and “aunties” along the route through Central Maui.

“They’ve gotten to know us and trust us,” he said. 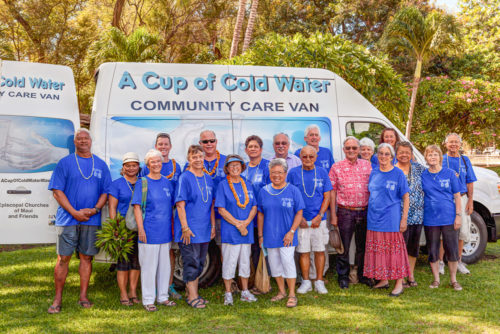 Volunteers and supporters work together to help Maui’s homeless community.

A little ‘elbow-grease’ Christianity
Estimates of the numbers of homeless people on Maui range as high as 2,000, about half of whom are “hard-core homeless” with little access to assistance on weekends, according to Kekuhaupio “Keku” Akana, a parishioner at Good Shepherd Episcopal Church in Wailuku.

“Helping them was always something that I felt compelled to try and be part of the hand of Christ in,” according to Akana, 57, a retired Maui deputy police chief, the inspiration and driving force behind A Cup of Cold Water (ACCW), which takes its name from Matthew 10:42.

“The old-timers used to call us peace officers and that’s what I considered myself,” he said. “But it was always very difficult when you had to respond and move on, respond and move on, and you couldn’t give quality time to somebody in need,” he told ENS. “I was a cop for 25 years; I drove into a lot of despair.”

So with “a little elbow-grease Christianity, age-old compassion and love,” diocesan support and generous donations he formed a committee of dedicated supporters. They began organizing, fundraising, recruiting and training volunteers from Good Shepherd and the island’s other Episcopal churches: St. John’s, Kula; Holy Innocents, Lahaina; and Trinity-by-the-Sea, Kihei. The first run happened in November 2013.

Since then, the ministry has distributed some 34,000 items during more than 4,300 encounters and it has attracted volunteers from Catholic, Nazarene, Congregational, New Hope Chapel, Grace Bible, Hawaiian Church and other local communities of faith. Akana hopes it will expand beyond the current three weekly runs: Wednesdays in Central Maui, Saturdays in Lahaina and West Maui, and Sundays in Kihei and South Maui.

The ministry relies on donations to help others survive, he said. ACCW partners with other local agencies and hands out resource cards, and upon request, Bibles and prayer books.

“For us, it’s giving hope and love, moment by moment, person to person,” Akana said. “It’s giving a little bit of hope to someone in despair, connected to addiction, mental illness or whatever the circumstances, giving hope that someone’s going to come because they care.”

Good old-fashioned compassion
On a steamy Saturday morning, B. J. Santiago restocks the van with water, food and supplies from the storage space at Good Shepherd Church and pauses for prayer with other ACCW volunteers.

A line has already formed in the church parking lot at the sight of the van. Each person’s needs are addressed before the van departs for the West Maui run.

“There are lines waiting when we get back from the run, too,” according to B.J. Santiago, a longtime Good Shepherd member and one of nine volunteer drivers. “Some of our guests are homeless, some work but have a hard time making ends meet.”

Stops along the route are scheduled and unscheduled: “If I see people who look like they need help, and there’s room to pull the van over, I do.”

With a tropical storm threatening, he is eager to assist as many people today as possible. He parks at the first scheduled stop, along Highway 30 west. One, two, three quick beeps of the horn and he goes to check on the elderly “uncle” who has built a wooden shelter on top of a truck, beside the tent where a family of six live.

Typically, there are three volunteers per run. A driver records items distributed and keeps track of mileage. Two others distribute food and personal items and “talk story” with guests, which just seems natural to volunteers like Kit Hart, a parishioner at St. John’s, Kula.

“We just take people at face value. Just the fact that we’re here, engaging them as people about whatever they want to share, helps,” according to the retired family therapist. “They need food and other things, yes, but they need smiles and conversation, too.”

“Mickey” was among the first to line up as the van parked near the Lahaina courthouse, alongside the town’s iconic 60-foot high, block-long banyan tree.

“I lived in Ohio and California. I came here to work and got hurt,” according to the former restaurant employee. “I have a place to stay, but the food helps. Every little bit helps.”

Andrew, who requests and receives a pair of slacks, says he left Saginaw, Michigan, in search of “a peaceful environment. I kept moving west.”

But “things have been up and down financially,” he said. “A Cup of Cold Water is a blessing to me. It’s the only thing available this day of the week. The food helps out a lot.”

Food is the main thing, agreed Joel, 48, who said the past two years have been tough ones. “I lost my dad. My camp just got bulldozed. I had a Volkswagen but someone stole the engine. It’s been two years now and I’ve just left it all in God’s hands.

“But,” he smiled, “it’s great that A Cup of Cold Water comes out here, and helps us. Every little bit helps and I’m thankful to God. I mean to give to others, too.”

He points ACCW volunteers in the direction of “Charles” who is dozing on and off in a wheelchair and whose legs are covered with infected sores. He promises Santiago to keep a watchful eye on Charles.

A little further along the route, Deborah Duffy hesitates when Santiago and Hart beckon her toward the van.

Seated at a park picnic table near the ocean, she is at first cautious. But after watching Hart interact with others, she approaches, eager to interact, to share her story.

“I haven’t been in a house for four years,” she said. “I lost my wallet. I had to give up my apartment and I’ve been hoping to get back in. I’m trying to make some money so I can eat.”

For now, the food and attention allays at least some of her anxiety. “I didn’t know anything like this existed,” according to the 59-year-old. “I think you’re blessed. When do you come back?”