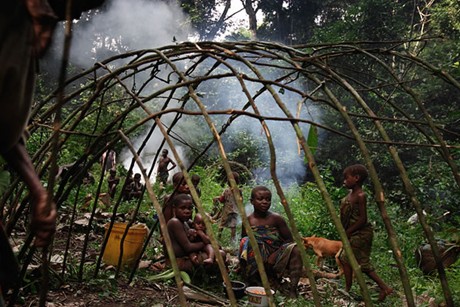 The Pygmy people’s appearance and lifestyle means they have also been marginalized by much of society (2). Photo: Creative.org

[Anglican Communion News Service] The Anglican Church in the Democratic Republic of Congo (DRC) is breaking new ground by bringing help and hope to a Pygmy1. community living in the country’s forests.

Pygmy peoples live in several ethnic groups across the forests of central Africa. There are an estimated 250,000 to 600,000 living in the Congo rainforest alone.

These forest dwellers have lived by hunting and gathering for millennia. But in the past few decades their homelands have been devastated by logging, war and encroachment from farmers. Their appearance and lifestyle means they have also been marginalized by much of society2.

In an interview with ACNS , the Provincial Youth Worker for the Province de L’Eglise Anglicane Du Congo the Revd Bisoke Balikenga revealed that he is talking with the Pygmy community to find out how he and other Anglicans there can best meet its needs.

Earlier this year, Mr Balikenga and a team of other youth workers visited Bamande, a Pygmy settlement in the heart of the Equatorial rain forest. “We went to give them food and to find out how we can reach them with the Word of God,” he explained. “They were saying that they also want to learn how to read and write.”

Mr Balikenga explained that locals have been hiring the Pygmy people in Bamande to do basic chores such as laundry for them. The wages are very small: “[The Pygmy people] are surviving on less than a dollar a week,” he said.

“We gave them beans and salt and it was nice to see their reactions because many of them did not think that any church, including the Anglican Church could help them,” he said. “It is really nice to work with Pygmies because they have been neglected by many people for a long time.

“We need to organise seminars and workshops for them so that they can learn how to read and write,” he said. “We need to teach them about their health and where they can get the right medicine when they have a problem since most of them still rely on traditional medicines which are not always effective.

He added: “The Church activities are going well but we still need to do more. These people need food since a lot of them are dying of starvation, and clothes.”

The Anglican Church is also thinking about how best to bring the Gospel to these forest people. “We need more evangelistic teaching among Pygmies,” said Mr Balikenga who explained that there were other churches trying to help, but were not going far enough to help Pygmy communities.

Mr Balikenga said that, regardless of their lifestyle, their poverty or lack of formal education, the Pygmy people deserve to be treated with dignity: “They should still be considered like any other human being with rights.”

By meeting both their physical and spiritual needs the Province de L’Eglise Anglicane Du Congo aims to do just that. “We need to give hope to Pygmies who are mostly neglected by the society here in Congo,” he said.

1. The term ‘Pygmy’ has gained negative connotations, but has been reclaimed by some indigenous groups as a term of identity
2. The conflict in the DRC was especially brutal for the country’s Pygmy peoples, who suffered killings and rape. In August 2008, nearly 100 were released from slavery in DRC, of whom almost half came from families who had been enslaved for generations – See http://www.survivalinternational.org/tribes/pygmies