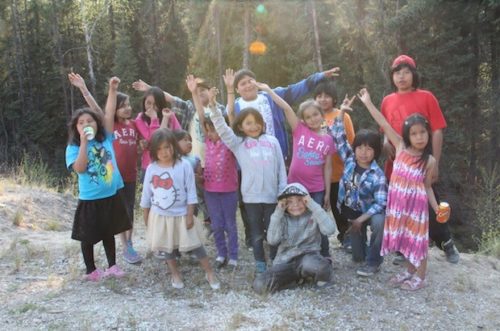 [Anglican Journal] Anglican Video is producing a documentary on the creation of the Spiritual Indigenous Ministry of Mishamikoweesh, the first indigenous diocese in the Anglican Church of Canada.

Lisa Barry, Anglican Video senior producer, says the documentary—which will be available in 2015—explains the genesis and evolution of the new diocese, beginning with the dream of pioneering aboriginal priest the Rev. William Winter. “This diocese was William Winter’s dream,” says Barry. “It began to be articulated at the first Sacred Circle in 1989 and it has come to fruition in the installation of Bishop Lydia [Mamakwa].”  Mamakwa’s installation and the celebration of the new diocese took place in the first week of June at Kingfisher Lake in northern Ontario.

Footage of the celebration and interviews with Mamakwa and other people in the community have already been posted on the church’s website, but the documentary is intended to provide the historical context documented by Anglican Video.

“It’s been such a privilege…to film every Sacred Circle,” says Barry, explaining that the first Sacred Circle in 1989 was the first time Anglican aboriginal clergy from across the country gathered. Barry added that it has also been a privilege to witness the changes in what was voiced in those gatherings. “What you saw at the first Sacred Circle [was] a glimmer of hope and a lot of pain…And in 1994, it was just like a river or a sea of pain, with the people sharing about residential schools and the apology,” she said. “And then it became about rebuilding. And Lydia’s installation was a… glorious moment, to see the tremendous pride and hope and just grace that was visited upon that event.” Anglican Video filmed the new diocese’s first Sacred Circle, which will be its governing body, functioning like a synod, as well as the week’s celebrations, which included evening gospel music jamborees.

Barry says she hopes the documentary will be useful when Mamakwa tells the story of Mishamikoweesh in communities and also for helping all Anglicans understand the purpose and meaning of this new indigenous diocese, especially the fact that it is not a movement to separate from the church but to create an indigenous diocese within the church. “That was what was stressed over and over again,” said Barry, explaining that the message was, “We are walking together…We are not leaving you. We are walking with you as equal partners.”

Barry said the documentary marks both an end and a beginning. “It is the fruition of this dream, but now the work is ahead.”

But Barry said the stories she has heard from people in the community indicate that Mamakwa is well equipped to lead them through new challenges. She recounted the story of one young woman who said that Mamakwa had cared for her at a time when she was despondent about the suicides of friends, inviting her to be involved and help in the church with other youth. She told Barry that many people have such stories of Mamakwa personally inviting them, watching over them, encouraging them and trying to help them to heal. “I heard so many stories like that. I think what a tremendous testament to Lydia as a leader—in her quiet way, saving her community and saving young people,” said Barry.

The video, when finished, will be available online on the church’s website and from Anglican Video.