[Anglican Communion News Service] The five-year-old son of a founding member of Baghdad’s Anglican church was cut in half during an attack by the Islamic State1 on the Christian town of Qaraqosh.

In an interview Aug. 8, an emotional Canon Andrew White told ACNS that he christened the boy several years ago, and that the child’s parents had named the lad Andrew after him. 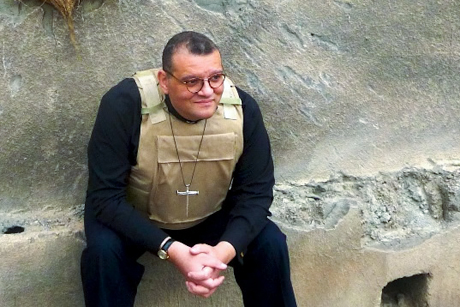 Canon Andrew White Photo: Foundation for Relief and Reconciliation in the Middle East

“I’m almost in tears because I’ve just had somebody in my room whose little child was cut in half,” he said. “I baptized his child in my church in Baghdad. This little boy, they named him after me – he was called Andrew.”

The fact that Andrew’s brother was named George after St George’s Anglican Church in Iraq’s capital demonstrates the strong ties the family had to the church there. The boy’s father had been a founder member of the church back in 1998 when the Canon had first come to Baghdad. White added, “This man, before he retired north to join his family was the caretaker of the Anglican church.”

Baghdad is part of the Diocese of Cyprus and the Gulf, which is included in the Episcopal Church in Jerusalem and the Middle East, a member church of the Anglican Communion.

Though the move north should have proved safer for the Iraqi Christian family, the Islamic State made sure that it became a place of terror. “This town of Qaraqosh is a Christian village so they knew everybody there was part of their target group,” said White. “They [the Islamic State] attacked the whole of the town. They bombed it, they shot at people.”

ISIS, which has been called a “brutal, extremist group” and which claims to have fighters from across the world, announced the creation of a “caliphate” – an Islamic state – across its claimed territory in Iraq and Syria a month ago. There is a BBC background report here and one from the New York Times here.

The boy’s family, along with many other townspeople, has now fled to Irbil. However, news reports suggest this may be the Islamic State’s next destination.

Anglicans at the forefront of relief
The violent takeover of parts of Iraq by the Islamic State is threatening to bring about what the United Nations has said would be a “humanitarian catastrophe” in the beleaguered nation.

White said that Anglicans there have been working hard to provide a lot of support for the Christians who have fled Mosul and Nineveh to the north, as well as the many other minority groups targeted by the Islamic State.

“Anglicans are literally at the forefront of bringing help in this situation and there’s no-one else,” he said adding that the church is supplying much-needed food, water, accommodation and other relief items thanks to financial contributions from supporters overseas. The church’s activities are led by a Muslim, Dr. Sarah Ahmed.

“We need two things: prayer and money. With those two we can do something. Without those we can do nothing.”

As regards prayer, White said, “I have three ‘P’s that I always mention which is for protection, provision and perseverance. We need protection, we need to provide for those people and we need to keep going.”

It’s clear from social media posts on Facebook and Twitter that members of the Anglican Communion right across the world are praying for this situation. Many have also indicated their support for persecuted Christians in Iraq by changing their social media avatars to the Arabic symbol for “N” denoting Nazarene, which ISIS has been using to identify Christian homes.

Leaders speak out
In recent days, Anglican leaders from countries including Egypt, Wales, Brazil and South Africa have all expressed their dismay at the situation unfolding in Iraq.

Archbishop of Canterbury Justin Welby issued this statement Aug. 8 on the situation in Iraq, shortly before he travelled from the Philippines to Papua New Guinea.

Other Christian leaders have also spoken up about the situation in Iraq including Roman Catholics, who, in England and Wales, have designated Aug. 9, as a Day of Prayer for Christians in Iraq. The Syrian Orthodox Patriarch Aug. 7 wrote to the United Nations, following an emergency meeting of patriarchs, calling on the UN Security Council to “fulfill their responsibilities in stopping this genocide.”

Those wanting to assist the church in Baghdad can find more information here.