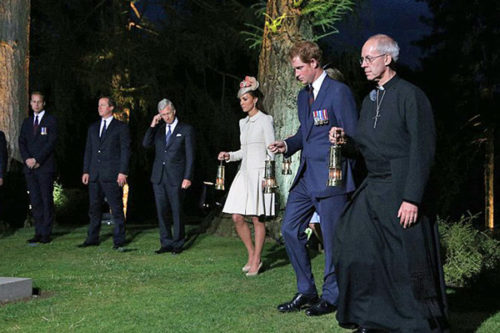 Archbishop Justin Welby carries lanterns with Prince Harry and the Duchess of Cambridge in Mons, Belgium on Aug. 3. (Picture: PA)

[Lambeth Palace] Archbishop of Canterbury Justin Welby joined members of the Royal Family and Britain’s Prime Minister at an event in Belgium the evening Aug. 3 to remember the entry of British soldiers into World War One in August 1914.

The service, which recalled the sacrifices of British soldiers while giving thanks for the strong friendship between former foes, was held at St. Symphorien Military Cemetery, Mons. It was attended by the Duke and Duchess of Cambridge; Prince Harry; and Prime Minister David Cameron.

Also in attendance were the King and Queen of the Belgians; the President of Germany; the President of Ireland; and representatives of other countries who fought in the First World War. Five hundred people attended the event, many with personal family links to soldiers buried in the cemetery.

During the ceremony the archbishop prayed for reconciliation, asking that our “God of peace and justice” will strengthen people to “seek peace”.

In a blessing the archbishop said:
“God of peace and justice,
Who in compassion for a world
Broken by our sins of pride, desire,
selfishness and ambition,
brought reconciliation to all who seek you,
Strengthen us to seek peace and pursue it,
To forgive as we are forgiven;
And the blessing of God almighty,
the Father, the Son and the Holy Spirit,
be among you and remain with you always.
Amen”

The St. Symphorien Military Cemetery contains the bodies of the first and last British soldiers who died on the Western front in the First World War: Private John Parr of the Middlesex Regiment, who was fatally wounded during an encounter with a German patrol on Aug. 21, 1914, two days before the Battle of Mons; and Private George Ellison of the Royal Irish Lancers, who was killed on Nov. 11, 1918. The cemetery is shared almost equally between the Commonwealth and German dead, thanks to a Belgian, Jean Houzeau de Lehaie, who gave the land on condition that both British and German soldiers would be buried there.

The commemorative event – part of the government’s program to mark the centenary of the First World War – was organized in partnership with the Commonwealth War Graves Commission, and was based around music, poetry and readings which reflect the history of the site.

Vigils and commemorations have been held all over Europe in the past few days. A service the evening of Aug. 4 at Westminster Abbey began in the last hour before the 100th anniversary of the moment that Britain was pulled into the war. The church, which was fully lit, gradually descended into darkness until all the lights and candles inside were extinguished. Lastly, the Duchess of Cornwall, representing Queen Elizabeth, snuffed out an oil lamp at near the Grave of the Unknown Warrior. The grave contains unidentifiable body buried in soil brought from France.

The darkening of the church was meant to represent the shadow of war descending on Britain. It was also meant to echo the words of then-Foreign Secretary Sir Edward Grey who, after telling Parliament that war was inevitable, told a friend that “The lamps are going out all over Europe, we shall not see them lit again in our life-time.”

At Westminster, only the Paschal Candle remained burning, in the Lady Chapel, “representing the Light that for ever shines in the darkness, offering us hope,” the Westminster website said.

The order of service for the vigil is here.

Queen Elizabeth joined in a local commemoration at Crathie Kirk in Aberdeenshire, Scotland, near Balmoral castle.