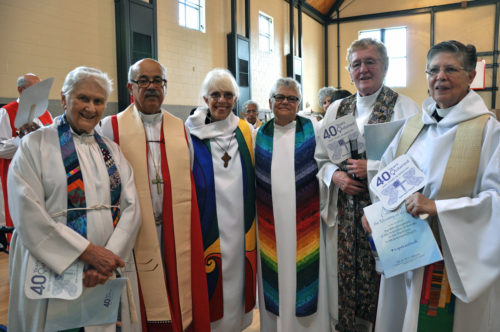 [Episcopal News Service] The following are summaries of the lives and work of the priests known as the Philadelphia 11 since their “irregular” ordinations on July 29, 1974.

The Rev. Merrill Bittner, 67, served in the Diocese of Rochester from 1973 to 1976, including a 1973-1975 term as an associate at Episcopal Church of the Good Shepherd in Webster, New York. She worked as a hospital chaplain and served at St. Barnabas Episcopal Church in Rumford, Maine from 2001-2006. She married Nancy Noppa, a college friend with whom she had traveled the United States, in 2013.

The Rev. Alla Bozarth, 67, founded Wisdom House, a Minneapolis-based interfaith spirituality center. After her husband died in 1985, she returned to her native Oregon and continued her ministry with Wisdom House West. She serves as resident priest of there and writing poetry and prose. She has written two books on grief, Life is Goodbye/Life is Hello ~ Grieving Well through All Kinds of Loss (1982) and A Journey through Grief (1990). Some of her poetry is on a blog here.

The Rev. Alison Cheek, 87, served at St. Stephen’s and Incarnation Episcopal Church in Washington, D.C. After her husband died, she served at Trinity Memorial Church in Philadelphia before studying at the Washington Institute of Pastoral Psychotherapy and beginning her own counseling practice. She later joined the faculty of Episcopal Divinity School as director of feminist liberation theology studies. After retirement, she moved to Maine and became part of the staff of the Greenfire Retreat Center, then active in Tenants’ Harbor. She also affiliated with St. Peter’s Episcopal Church in Rockland, and served as spiritual counselor, pastoral minister, and supply priest for St. Peter’s until she moved in 2013 to Brevard, North Carolina.

The Rev. Emily C. Hewitt, 70, worked for a short time at Andover Newton Theology School as an assistant professor of religion and education before earning a law degree from Harvard. She retired in 2013 as chief judge of the U.S. Court of Federal Claims. She is an avid long distance race walker and won the U.S. National Race Walking medal in 1987.

The Rev. Carter Heyward, 68, was hired by Episcopal Divinity School, along with the Rev. Suzanne R. Hiatt, in January 1975. Heyward taught at EDS until 2005. She was the author of many books and scholarly papers. She moved back to her native North Carolina and now runs and teaches at a therapeutic horseback riding center.

The Rev. Suzanne R. Hiatt (1944-2002) taught on the faculty of Episcopal Divinity School from 1975 until her retirement in 1999. She was the author of many books and scholarly papers.

The Rev. Marie Moorefield Fleischer, 70, left the Episcopal Church in 1975 and became a United Methodist minister. She served as a chaplain in Methodist healthcare settings. She was recognized as an Episcopal priest in 1985 and since then served parishes and diocesan offices in Maryland, West Virginia, Virginia, and Western New York. She served as canon to the ordinary in the Diocese of North Carolina from 2001-2006. Her husband, astronomer Robert Fleischer, died in 2001.

The Rev. Jeanette Piccard (1895-1981), served as an unpaid assistant at her home parish of St. Philip’s in Minneapolis. She was a popular speaker throughout that area. She and her husband, Jean Felix Piccard, were pioneering aviators and she was the first woman licensed as a hot air balloon pilot in the United States and the first woman to pilot a stratosphere-capable balloon to that height, and thus she has been called “the first woman in space.” She served as a consultant to NASA.

The Rev. Betty Bone Schiess, 87, was the executive director of the Mizpah Educational and Cultural Center for the Aging in Syracuse, New York, from 1973-1984. She later served in various campus ministry and parish positions in New York, where she still lives. She reported that she recently wrote a letter to her local newspaper about failed U.S. immigration policy, suggesting that the U.S. ought to return the Statue of Liberty to France. She says that she received more hate mail over the letter than she did during the time around her ordination.

The Rev. Katrina Welles Swanson (1935-2005) was hired by St. Stephen’s, a poor parish in St. Louis, Missouri, as an assistant for a dollar a year in 1975. In 1978, she became the first female rector in the tri-state New York metro area when she was hired as the rector of St. John’s Episcopal Church in Union City, New Jersey, where she served until retiring in 1995. The website devoted to her memory, Katrina’s Dream, promotes the full inclusion of women in society and urges people to support passage of the Equal Rights Amendment to the U.S. Constitution. Her husband, the Rev. George Swanson, continues to promote her causes.

The Rev. Nancy Hatch Wittig, 68, served parishes in the Diocese of Newark before a 20-year term as rector of the Church of St. Andrew in the Fields in Philadelphia. She moved to Ohio after retirement and is an assistant at St. Peter’s Episcopal Church in Lakewood, Ohio. In 2012, she married Pamela Darling, an author and lay leader in the Episcopal Church.

The ordaining bishops
Retired Colorado Bishop Suffragan Daniel Corrigan, retired Pennsylvania Bishop Robert L. DeWitt and retired West Missouri Bishop Edward R. Welles II (Katrina Wells Swanson’s father) have all died. Costa Rica Bishop Antonio Ramos, who assisted at the ordinations and who was the only one of the four who then was exercising jurisdiction in the church, is retired.