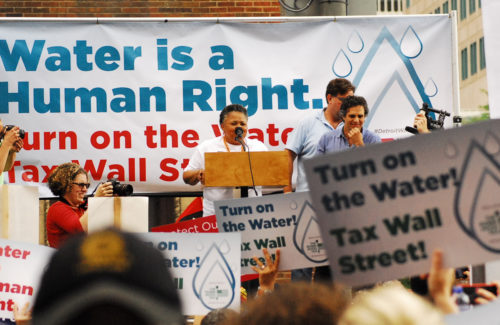 More than a thousand protesters gathered in Detroit, Michigan, July 18 in defense of water rights including actor Mark Ruffalo, a water rights activist, who attended the march and rally. Photo: T.R. Smith/Diocese of Michigan

[Episcopal News Service] The building crowd – which swelled to more than 1,000 protesters on July 18 in downtown Detroit – had a chant growing ever louder.

Their voices were apparently heard. Monday, after months of residential water shutoffs designed to help the bankrupt city of Detroit raise money and after several protests, the city’s water department announced it has suspended residential cutoffs for 15 days.

“This is a pause. This is not a moratorium,” water department spokesman Bill Johnson told The Detroit News. “We are pausing to give an opportunity to customers who have trouble paying their bills to come in and make arrangements with us. We want to make sure we haven’t missed any truly needy people.”

Increase efforts will also be made for the department to communicate methods of making payment arrangements with religious and community leaders.

Prior to the 15-day suspension, cutoffs were met with protests from civic and religious leaders, who believe if businesses were held to the same standard as the residents, there would be no need for “heavy-handed tactics.”

Last week, the protesters marched from Cobo Center to Hart Plaza, near the city’s riverfront. Earlier in the day, a group of protesters was arrested as it blocked trucks from leaving a facility contracted to administer the shutoffs. One of those arrested was the Rev. Bill Wylie-Kellerman, rector at St. Peter’s Episcopal Church in Corktown.

It was the second time in a little more than a week Wylie-Kellerman was arrested in an act of civil disobedience, blocking the entrance to Homrich Industries.

The police tried to “move us forcibly, and we sat down,” he said after his first arrest. “We’re here to appeal to the workers to stop shutting off the water.”

It is estimated up to 3,000 residences weekly are having their water service cut for being at least two months behind in payments and that nearly 30,000 homes could have their service cut. So far, around 17,000 homes had their service stopped.

Although the city’s water department has encouraged those with accounts in arrears to set up a repayment plan to prevent service from being stopped, it hasn’t been a smooth process.

“I’m on assistance, which I’m not proud to say,” said Detroiter Carl Gardner, part of a march protesting the water shutoffs. “Yeah, money from welfare helps pay utilities. At least, it’s supposed to. But, man, it doesn’t pay it all.

“Understand, when you are deciding what to do with what’s left, do you choose food or paying on a bill that the city hasn’t tried to collect on in as long as I can remember?” 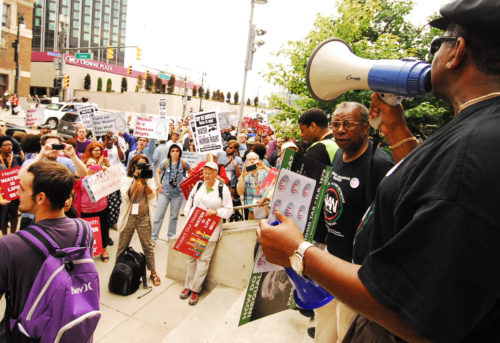 More than a thousand people marched in Detroit, Michigan, in defense of water rights on July 18. Photo: T.R. Smith/Diocese of Michigan

Many who have been shut off claim to have not received water bills lately, or in any sort of regular fashion.

“The water shutoffs in Detroit are a catastrophe,” said the Rt. Rev. Wendell N. Gibbs Jr., bishop for the Episcopal Diocese of Michigan. “The people most at risk have no voice.”

A big part of Detroit’s ailments has been a shrinking tax base caused by a dwindling population. Over the course of several decades, Detroit’s population has tumbled from 2 million in the 1950s to 700,000. What was once one of the nation’s wealthiest cities is now one of the poorest.  So distressed is the city that steps were taken by Michigan Governor Rick Snyder to appoint an emergency financial manager, Kevyn Orr, to oversee the economic recovery of the city by handling all of its financial matters.

However, the idea of stepping up collection efforts with shutoffs in a city with more than 40 percent of its residents living below the poverty level is troubling to many.

“Disconnections due to non-payment are only permissible if it can be shown that the resident is able to pay but is not paying. In other words, when there is genuine inability to pay, human rights simply forbids disconnections,” said Catarina de Albuquerque, who specializes on water and sanitations issues for the United Nations, in a statement.

At Friday’s rally in Detroit, organizers from the National Nurses United presented their opposition to the shutoffs, citing a potential public health crisis.

“This is not a Third World country,” explained Ivie Jefferson, a Detroit resident for 52 years. “Prisoners are afforded the opportunity to use water, even behind bars. You can’t just hold prisoners without giving them basic human essentials, such as water. I see it as a God-given right for prisoners, and it’s a God-given right for common folk.

“It’s another case of the poor being oppressed by thugs masquerading as being dictators in charge. It ain’t right. And it ain’t staying this way. We will continue to protest – peacefully, I have to say – until our voices are heard. See all these brothers and sisters walking with me? We’re not happy.

“Community groups support us. Many churches and religious leaders believe in challenging the wrongness of this.”

“People could get sick,” said L.C. Witt, a nurse from Kalamazoo, Michigan, who traveled two hours to attend the rally and march. “In the most basic human conditions, you have to understand fresh water is needed to clean, nourish and to deal with human waste. How unreasonable is it to afford the poorest of our citizens not only water for reasons of health and safety, but also for the issue of basic human dignity?

“We are a not asking for a handout. We’re asking that the marginalized citizens of Detroit be treated with the same respect given to large corporations.”

First-term Detroit Mayor Mike Duggan admitted while there is a need to collect water and other overdue bills due to the city, he also expressed disapproval over the collection methods and the lack of fully communicating the shutoffs before they began. But, because of the emergency financial manager arrangement, he has no real authority over Detroit’s water department.

Judge Steven Rhodes, however, did take the opportunity to address the collection methods during bankruptcy court proceedings last week.

“Your residential shutoff program has caused not only a lot of anger in the city and also a lot of hardship,” Rhodes said to the deputy director of the water department, Darryl Latimer. “It’s caused a lot of bad publicity for the city it doesn’t need right now.”

Here’s another spin-off from the water shutoffs: According to Leilani Farha, a U.N. adequate housing authority, children could be separated from their families by social services representatives due to inadequate living conditions.

“If these water disconnections disproportionately affect African-Americans they may be discriminatory, in violation of treaties the U.S. has ratified,” Farha said.

The irony, as many people see it? The region has no issues with a water shortage. Nearly 20 percent of the world’s freshwater supply can be found in the five Great Lakes surrounding Michigan.

“The lack of affordable access to clean water in the United States in 2014 is shameful,” Gibbs said. “And yet, the government persists in spending more money to shut off the water than it would in assistance to needy citizens to pay their water bill.

“It seems that Detroit has taken a further negative step in bankruptcy – from financial to moral bankruptcy.”

— Rick Schulte is director of communications for the Episcopal Diocese of Michigan.