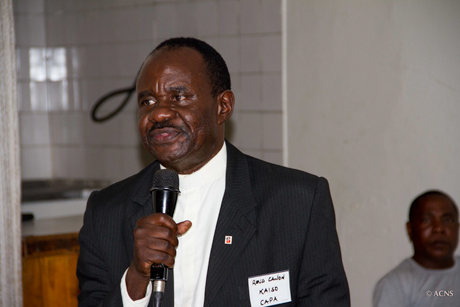 [Anglican Communion News Service] Hundreds of faith leaders from across Africa recently met in Uganda’s capital for a three-day summit on sustainable development and the Post-2015 Development Agenda.

More than 200 religious leaders gathered in Kampala between June 30 and July 2 for the Africa Faith Leaders’ Summit with its theme of Enhancing Faith Communities’ Engagement on the post 2015 Development Agenda in the Context of the Rising Africa.

During the conference the leaders, from a wide variety of religious traditions, considered ways to work together to ensure post-2015 goals were implemented.

They made a host of commitments, including doing more to promote peace and reconciliation in countries and communities currently facing violence; to promote interfaith dialogue and co-operation as a means of eradicating religious radicalization; to ensure women, children, youth, people with disabilities and people living with HIV/AIDS are included in finding solutions to Africa’s development challenges; and to promote the resourcefulness of Africa as opposed to its poverty and misery.

Canon Grace Kaiso, general secretary of the Council of Anglican Provinces in Africa (CAPA) who attended the event, said, “The shaping of our common future must not be left to a few but must involve people at all levels.

“Our expectation of support from partners worldwide should not stop us as Africans from bearing our responsibility to turn life on the Continent around by being responsible and accountable stewards of the enormous resources God the Creator has endowed us with.

“CAPA, like many others at the meeting, is committed to the unlocking of the potential of  the continent for the thriving of the human family.”

The summit was organized under the auspices of the African Interfaith Initiative on Post-2015 Development Agenda, a coalition of faith communities and their leaders across Africa with technical support from the United Nations Millennium Campaign (UNMC) and other development partners.

Participants included representatives of the African Council of Religious Leaders, Symposium of Episcopal Conferences of Africa and Madagascar; All Africa Council of Churches; Organization of African Instituted Churches; Hindu Council of Africa; Council of Anglican Provinces of Africa; Union of Muslim Councils of Central, Eastern and Southern Africa; the Spiritual Assembly of the Baha’i; the Association of the Evangelicals of Africa; Fellowship of Christian Councils and Churches in the Great Lakes and Horn of Africa; and Arigatou International, Nairobi.

The Post-2015 Development Agenda will replace the Millennium Development Goals (MDGs) that will expire in 2015. Of the eight goals, it is believed that only three will be fully met by 2015, hence the need for a successive agenda to build on the achievements made to date.

Read the faith leaders’ statement From Lament to Action here