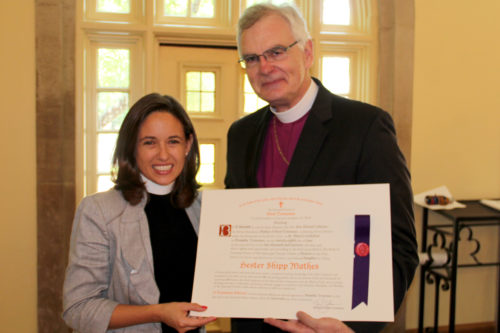 For six years as a student at St. Mary’s Episcopal School, Hester Shipp Mathes attended morning chapel in the sanctuary of Church of the Holy Communion. Twenty-two years later, she has returned to that sanctuary, now as an ordained deacon and the new curate of Church of the Holy Communion. Mathes’ ordination as deacon, which took place June 28 at St. Mary’s Cathedral, is the last major step before being ordained to the priesthood.

The Reverend Hester Mathes joins the Reverend Sandy Webb, who became priest in charge of Holy Communion one year ago, and the Reverend Randy McCloy, deacon. “Hester brings to her ministry a wealth of experience as an educator and church professional, and will learn here the craft of priesthood,” says Webb. “I am very grateful to Bishop Don E. Johnson for appointing Hester to serve at Holy Communion, and to the vestry for creating a position in which someone as talented as Hester can come to learn.”

This is Mathes’ second homecoming to Memphis. After graduating from the College of William & Mary, studying music, art and psychology, she returned to serve as youth coordinator at Calvary Episcopal, the parish in which she grew up, and to teach at St. George’s Independent School.

“Teaching in itself was a ministry,” says Mathes, but the “little voice” of a call to priesthood had started making itself known during her college years. She returned to Virginia in 2011 for graduate school, this time at Virginia Theological Seminary, and graduated this spring.

Mathes’ work at Church of the Holy Communion will focus on young adult ministry and sharing in sacramental, preaching and teaching responsibilities. Assuming that all of the canonical consents are received, Mathes will be ordained as a priest this winter.
Mathes and her husband Andy, who has recently opened the Tennessee office of Farr, Miller & Washington Investment Counsel (based in Washington, D.C.), have two children: Neeley, 11, and Zander, nine.