[Episcopal News Service] Al Ahli Arab Hospital in Gaza City is appealing for urgent aid as it struggles to provide critical healthcare services to anyone in need following more than a week of Israeli airstrikes targeting Hamas militants.

One of more than 35 institutions run by the Episcopal Diocese of Jerusalem, the hospital is striving to meet the increased demands on its already-overburdened staff, who have tended to the wounded despite being surrounded by conflict, the challenges of diminishing medical supplies, and their own fatigue.

“Like many hospitals in Gaza, Al Ahli Hospital is receiving patients who have been wounded, with staff working around the clock to provide them with critical medical care,” wrote Anglican Bishop in Jerusalem Suheil Dawani in an e-mail to church partners. “At the same time, Al Ahli is experiencing shortages in medicine, fuel, and food for both patients and those in the community who need help.”

During the past week, the Israeli military has carried out hundreds of airstrikes on Gaza, which includes 1.7 million residents and is one of the world’s most densely populated regions, in an effort to stamp out terrorist attacks against its citizens. Meanwhile, Hamas continues to fire rockets indiscriminately into Israel, with some having reached as far as Tel Aviv and Jerusalem, even as Egypt attempted to broker a peace deal early on July 15.

“In the last two days, the impact of the airstrikes has caused structural damages to the hospital, including its ventilation system in the operating theater and the emergency room. In addition, windows have been broken in many buildings, as well as in the new diagnostic center,” Dawani wrote in a statement.

The latest statistics from the United Nations Office for the Coordination of Humanitarian Affairs, published on July 14, report that more than 1,140 Palestinians have been wounded and 168 killed, including 133 civilians, and 36 children; more than 940 residential houses have been fully destroyed, leaving 5,600 people displaced; and 25,000 children have been traumatized and in need of psychosocial support.

“As the Israeli authorities have called up 40,000 reserve troops, there are fears the conflict will escalate and many more Palestinians will be killed, wounded, or displaced,” Dawani said.

Presiding Bishop Katharine Jefferts Schori, who visited Gaza in 2008 and again in 2013, told ENS that “God weeps at this war between his children. We weep as we watch the destruction, and we should be storming heaven with prayers for peace.”

She noted that the Al Ahli hospital “cares for all people in Gaza, both Muslim and Christian, with selfless dedication … Please help the Diocese of Jerusalem respond to the suffering in this latest violent chapter in the Land of the Holy One.” 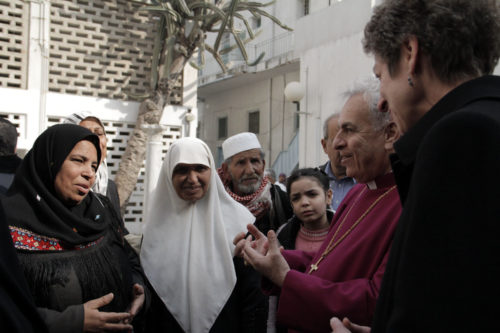 The Episcopal Church’s policy, as agreed by the 2012 General Convention, affirms positive investment “as a necessary means to create a sound economy and a sustainable infrastructure” in the Palestinian Territories and calls on the church to support “the Jewish, Muslim, and Christian study on peace with justice in the Middle East.”

Alexander Baumgarten, director of justice and advocacy ministries for The Episcopal Church, told ENS: “It is imperative for Israeli and Palestinian leaders to return to the table, with the strong support of international leaders like President Obama, to negotiate a just, durable, and permanent two-state peace agreement. Until a secure and universally recognized Israel exists alongside a sovereign and viable state for the Palestinian people, the tragedy of the present moment threatens to become an increasingly encompassing reality for two people who have suffered the strife of conflict far too long.”

Archbishop of Canterbury Justin Welby said in a recent statement that he is “deeply saddened and distressed by the eruption and escalation of violence in the Gaza Strip and across Israel” and urged “all sides to show restraint and pursue dialogue to end all conflict in the region.”

“As we continue urgently to hold the people of the region in our prayers, we must pray also for all people of goodwill to come together to protect the innocent and promote peace in the land.”

“These senseless crimes are wicked and must be condemned by decent people everywhere,” said Welby. “But the conflict that has arisen in the aftermath of these tragic events is the wrong way to proceed. As each day passes we see more innocent lives, including those of children, lost in the terrible cycle of revenge – no good can possibly come of this. It makes the search for a lasting peace that much harder and more elusive. We must all join hands to appeal to all sides to show restraint and to seek the way of dialogue to end all conflict in the region.”

Dawani joined the patriarchs and heads of churches in Jerusalem last week in condemning the “kidnapping and murder of young people and the violence which took place following these horrific incidents. We convey our deepest sympathy and sincere condolences to their families, friends and communities.

“We call upon both sides for an immediate ceasefire and the urgent resumption of peace talks.”

Further information about the Diocese of Jerusalem’s appeal is available here.

To support the Diocese of Jerusalem’s relief efforts in Gaza:

American Friends of the Episcopal Diocese of Jerusalem, http://www.afedj.org