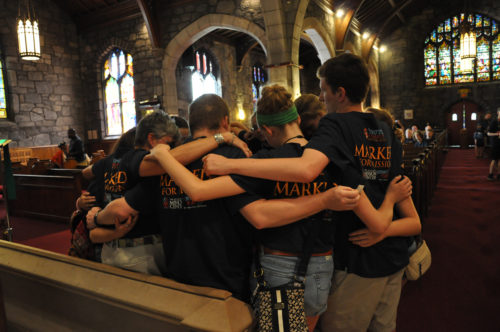 A group of Episcopal Youth Event 2014 participants from Massachusetts take a moment to pray July 11 inside the African Episcopal Church of St. Thomas. The group visited the historic church during the day’s pilgrimage around the Philadelphia area to visit historic sites and places of Episcopal Church mission work. Photo: Mary Frances Schjonberg/Episcopal News Service

[Episcopal News Service – Villanova, Pennsylvania] After four days of worship, workshops, prayer, long walks across the Villanova University campus, late-night conversations and contemplation of Scripture and the Five Marks of Mission, EYE14 all came down to the call to go out into the world and love it.

“Whenever God is about to change the world, God tells somebody to ‘Go’” and that is what is happening now, Diocese of North Carolina Bishop Michael Curry said during this sermon at the Episcopal Youth Event 14 closing Eucharist July 12.

God, Curry said, is the “very essence” and source of love, and “our mission is to love this world and ourselves into the very dream of God and when you do that, you’ll have the strength you need to bear any hardship and carry any cross because you’ll find power.”

This love is not the sentimental type, Curry said during his sermon.

“When the way is getting tough, when it’s getting hard and difficult, that’s when Jesus starts to talk about love,” he said, noting that it was in Holy Week “when Jesus knows he’s likely to sacrifice his life” that Jesus talked constantly about love.

Curry’s sermon had congregation members on their feet as often as they were in their seats as he roamed the dais and, at one point, crouched on the floor to show what his family’s ugly and bumbling cat looked like when she “was able to do what the Lord  put a cat on this earth to do” and hunt mice with a vengeance. In nearly 30 minutes he invoked St. Augustine, Jimi Hendrix and Jackie Robinson and Branch Rickey, as well as Muffin the Ugly Cat.

Video of the entire closing Eucharist is here.

Earlier in the day EYE14 heard a story of that sort of love enacted outside the walls of church from the Rev. Becca Stevens, founder of Magdalene and Thistle Farms, residential and social enterprises run by women who have survived lives of prostitution, trafficking, addiction and life on the streets.

Her stories, which ranged from Tennessee to Rwanda to a women’s prison in Texas, brought some to tears and held others spellbound. She told her listeners that all of the women “never doubted the idea that love heals.”

Stevens, the Episcopal chaplain to Vanderbilt University, warned EYE14 that the work of Thistle Farms and Magdalene and all other efforts like them for which the Episcopal Church is known have to be movements based in community and not individual efforts. Showing them a painting of the Last Supper, she said, “If we’re not a movement … the church becomes a still life.”

“And it’s beautiful to look at but we’re not going to sit there forever and we are going to move on,” she said, adding that when she looks at that painting she imagines the apostles pushing back from the table and going back out into the world. “If they had stayed there – as beautiful as it was, as meaningful as it was, as important as it was to the life of the world – if they had not turned around and gone back out, we would never know that story.” 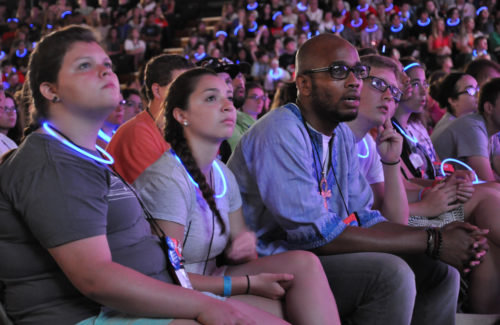 Episcopal Youth Event 2014 participants, some wearing very popular glow sticks given away by the United Thanks Offering, watch a video July 12 about the mission and ministry of the Community of Magdalene and Thistle Farms, a residential and social enterprise run by women who have survived lives of prostitution, trafficking, addiction, and life on the streets; and led by the Rev. Becca Stevens. Photo: Mary Frances Schjonberg/Episcopal News Service

Stevens told EYE14 that “we are called to love the world,” she said.

Video of Stevens’ presentation is here.

The Episcopal Youth Event 2014 included 786 youth in grades 9-12 during the 2013-2014 academic year and 263 adult leaders who spent July 9-12 here on the campus of Villanova University near Philadelphia, Pennsylvania. EYE14’s theme was “Marked for Mission” and the gathering was built around helping participants discern how the Holy Spirit has marked them for mission and how they might engage in the work of the Anglican Communion’s Five Marks of Mission, as a way to enact the call to love that they were hearing.

During the opening plenary session July 10 Bronwyn Clark Skov, Episcopal Church Youth Ministries Officer, gave what was for many participants an introduction to the Five Marks of Mission. She suggested they spend their time together at EYE14 exploring the connection between Scripture, responding to God’s call and “discerning our personal paths to ministry within the greater context of the community.” Her presentation begins at the 32:00 mark here.

The 14 youth members of the EYE14 planning team (listed here) gave her a shorthand way to remember the intent of each marks, Clark Skov said. The method, easily counted off on the fingers of one had, is Tell, Teach, Tend, Transform, Treasure. A video the youth made connecting a favorite Scripture passage to each mark is here.

The night before, the Rev. Randy Callender, a Philadelphia native, who is the rector of St. Philip’s Episcopal Church in Annapolis, Maryland, told them that “the city of Philadelphia will help you to understand the Five Marks of Mission” and may transform their understanding of mission.

“One day, the young people here at EYE will make a difference in someone’s life,” he predicted, adding that they will end “racism and sexism and classism and all other -isms and people will no longer use those -isms as tools to keep others out of the church.”

Video of Callender’s presentation is here.

Before the pilgrims left early on July 11, Diocese of Pennsylvania Bishop Clifton Daniel III told them that it was a “joy” to host EYE14. He recalled attending an event for Episcopal Church youth in 1964, an event which “formed me and shaped me in ways that I could not imagine” at the time. The same is true for the youth who have come to Philadelphia, said Daniel, who added he could see the future ordained and lay leadership of the Episcopal Church sitting before him.

“I am proud to be here with you, and I thank God for you,” Daniel said.

Every one of the 20 pilgrimage buses visited Independence National Historic Park and Christ Church, Philadelphia, where those who became known as Episcopalians gathered for the first time in General Convention at Christ Church in Philadelphia in 1785.

Along the way, the EYE14 pilgrims were welcomed and, at times, challenged. For some who went the Episcopal Community Services’ St. Barnabas Mission the challenge came to their attitudes about the nature of homelessness. Others had their liturgical piety challenged by the experience of Benediction of the Blessed Sacrament at St. Mark’s Church. 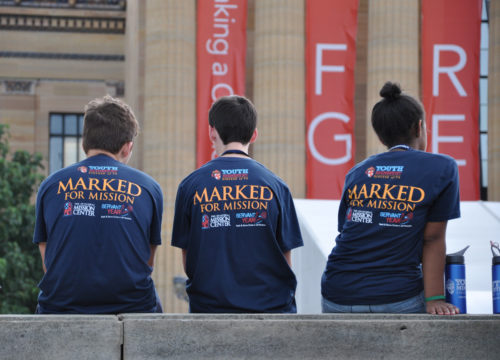 Three of nearly 800 youth sit on a wall on the terrace of the Philadelphia Museum of Art during a hug picnic July 11 during the Episcopal Youth Event 2014. EYE14’s theme was “Marked for Mission” and their T-shirts and accompanying tote bags were donated by the Diocese of Pennsylvania, co-sponsor of the July 9-12 gathering. Photo: Mary Frances Schjonberg/Episcopal News Service

Late in the afternoon the buses dropped the pilgrims off at the bottom of the Rocky Steps of the Philadelphia Museum of Art where, after they made the traditional run up the stairs, they encountered a dinner on the terrace featuring classic Philly foods, including cheesesteaks, hoagies, water ice and local sodas. There was a rousing dance party and a chance to play cornhole, a bean bag toss game that is very popular in Pennsylvania.

The day was not over yet. EYE14 returned to Villanova for Evening Prayer with the high-energy music of the St. Thomas Gospel Choir of Philadelphia and the HighLite Vibes of the Diocese of Long Island. Video of the complete service is here.

During her sermon Presiding Bishop Katharine Jefferts Schori challenged the pilgrims to contemplate and then tell the stories of their experience that day.

“You’ve been out and about in this city today, discovering its diversity, both its need and its blessings. Each one of you has a story to tell about the encounters of this day,” she said. “I hope you have been moved and marked and changed by someone or something you encountered today.”

Jefferts Schori said she hoped EYE14 participants would tell the stories of that pilgrimage because their friends and the entire world need to pay attention to the brokenness of the world and its causes, and they need to hear about the dreams Christians have for the wholeness that is the kingdom of God.

When encountering a person who is hurting or hungry, she said, there is a choice. “Will we engage or will we ignore that person? If we connect, we’ve got to share something of that good news – that all of us are loved beyond imagining, and that we’re willing to show that love in concrete ways.”

And, Christians are called to do more, said Jefferts Schori. “It may start by feeding somebody who’s hungry, but it doesn’t end there. We can feed someone a meal, but if nothing changes, that person is going to be hungry again in a few hours,” she said. “That’s where the longer-term and bigger-picture work of transformation starts – asking why this person is hungry, or why so many people are standing on street corners asking for help.”

Those sorts of questions can be annoying and irritating, she said, but they come from the Holy Spirit “acting more like a mosquito than a dove” that will “pester us and make us restless until there is justice for all.”

“We all need to be bitten, marked with an itch for what the world could be like,” Jefferts Schori said, adding in an echo of the celebration at the museum earlier that evening: “We’re not going to live in peace until everybody can sit down and share God’s great picnic together in peace.”

The text of the presiding bishop’s sermon is here. 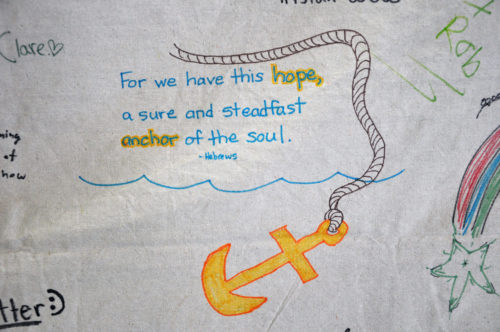 Episcopal Youth Event 2014 participants were encouraged to pick their favorite Scripture verse. Many posted their choice on the nine-panel prayer wall that greeted EYE14 inside the Pavilion at Villanova University for worship and plenary sessions. Photo: Mary Frances Schjonberg/Episcopal News Service

Following EYE14, more than 300 stayed in Philadelphia to engage 3 Days of Urban Mission. The majority of 3 Days of Urban Mission volunteers will stay at the University of Pennsylvania in inner-city Philadelphia. About 60 additional volunteers will be housed at the Episcopal Mission Center, managed by the Diocese of Pennsylvania. A map of the mission sites is here.