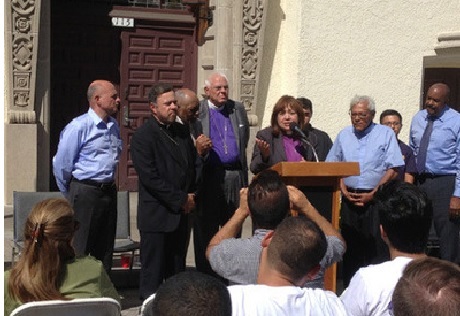 [Episcopal News, Los Angeles] Los Angeles Bishop J. Jon Bruno is among religious and civic leaders who called for a weekend of prayer and compassion July 19-20 for more than 52,000 young children who are in United States custody after fleeing violence, murder and extortion by criminal gangs in Guatemala, El Salvador and Honduras.

Bruno, along with Bishop Minerva G. Carcaño of the United Methodist Church, Robert K. Ross, president and CEO of The California Endowment, and Fred Ali of Weingart Foundation visited a temporary shelter at the naval base in Port Hueneme, California, where thousands of children are being housed since crossing the border in search of friends or relatives in the United States.

At a media conference in Los Angeles after the visit, the faith leaders called for a humanitarian response to the desperate conditions that cause the children – some as young as eight years old – to leave their homes. Bruno also praised federal officials for the quality of care being provided for the children. (A July 9 Los Angeles Times article about the group’s visit is here.)

“Jesus’ words are clear about people in need,” Bruno said in a statement. “‘Let the children come to me,’ he tells his disciples – also stating that those who provide food, shelter and clothing ‘to the least of these’ do so to Christ himself. We need to be the compassionate hands and heart of Jesus in serving all children, and especially to those held in detention on both sides of the Mexico – U.S. border. May God help us to show God’s own love and mercy to these little ones while calling our governments to work together for peace with justice.”