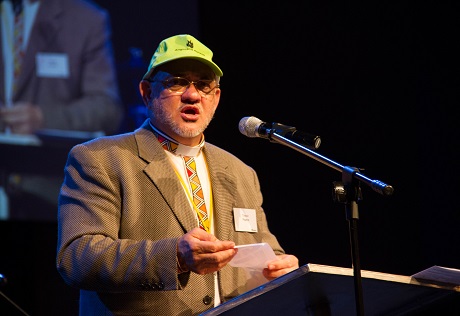 The Rev. Trevor Pearce talks to delegates at the conference. Photo: Bellah Zulu/ACNS

[Anglican Communion News Service] An Anglican priest from South Africa has described the Anglicans Ablaze conference as “well worth doing and exceeding our expectations” adding “God came and met us and did more than anything we could have hoped for.”

In an interview with ACNS, the Rev. Trevor Pearce, conference coordinator and director of Growing the Church (GtC), said: “We thank God for bringing us together in one conference and for the unity despite our different cultures, languages and worship styles.”

The Anglicans Ablaze conference brought together about 2,000 delegates from 18 countries and 43 dioceses from Southern Africa and other parts of the world, for five days of prayer and sharing from July 2-5.

A special Listening Team headed by Bishop of Swaziland Ellinah Wamukoya had the major task of praying, listening and sharing what God was saying throughout the whole conference.

On the final day of the conference, Wamukoya said that God had revealed to them the “need to go out to the fringes to share the Gospel” including the need for “the church and Anglican leaders ourselves to be transformed.”

Young people showed up in large numbers and played a major role throughout the whole conference. They were challenged by various speakers on the need to rise up and help bring about transformation in the church and society.

A young Anglican and board member of Growing the Church (GtC) Khozi Khoza said, “God is raising up an army with Joshua’s anointing. If God is going to bring about transformation in our society, it will be through the church because it’s God’s solution to the systematic problems plaguing our nation.”

Her brief but spirited preaching was well received by conference delegates. Some participants said her sermon was confirmation that young Anglicans are capable of contributing significantly to the growth of the church.

New Zealand Church Mission Society leader Steve Maina also shared his final thoughts and emphasized the need to evangelize. “We need to move from the mountain top and go practice in the valley what God has been saying to us,” he said. “We cannot just go back home and continue doing things the way we used to.”

He added: “It’s time to…go into circulation and share what we have. We’re too stuck in our structures but the love of God demands an urgent response from us.”

At the end of the conference, a number of delegates, particularly young people, committed their lives to Christ after an invitation to do so. They were welcomed and advised on how they can grow in their Christian life.

The conference was hosted by the Anglican Church of Southern Africa (ACSA), one of the largest and most diverse provinces on the continent, covering seven countries with many different languages, cultures and race groups.