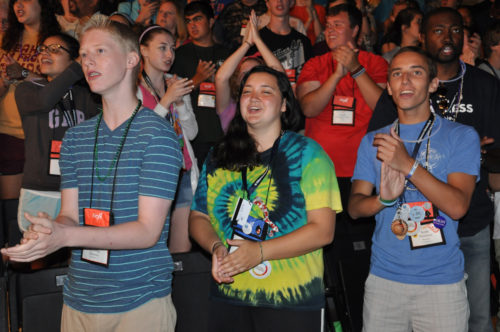 A few of the 786 youth attending the Episcopal Youth Event 2014 Opening Eucharist July 10 at the sports arena on the campus of Villanova University near Philadelphia, Pennsylvania, sing and sway to the communion music. Photo: Mary Frances Schjonberg/Episcopal News Service 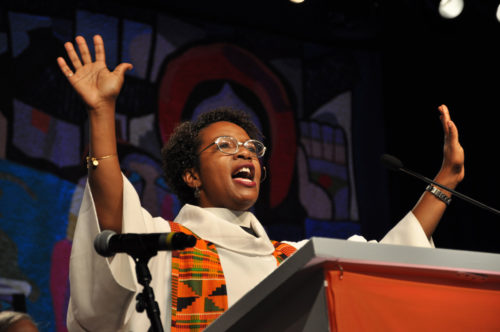 “Episcopal Youth, it’s time for you to bring it,” the Rev. Canon Stephanie Spellers, canon for missional vitality in the Diocese of Long Island, tells the Opening Eucharist at the 2014 Episcopal Youth Event, meeting July 9-13 on the campus of Villanova University in Philadelphia, Pennsylvania. Photo: Mary Frances Schjonberg/Episcopal News Service

“We’ve got some great youth programs in the Episcopal Church, where adults teach and form young people [but] I think it’s time for some reverse mentoring,” the Rev. Canon Stephanie Spellers, canon for missional vitality in the Diocese of Long Island, said during her sermon. “We elders can nurture and teach, but frankly we could use your wisdom and experience on the mission frontier.”

“We need you to show us what fish and loaves you’ve got in your backpack,” she said, in a reference to the day’s Gospel reading about the feeding of the 5,000.

“Yes?” she asked, turning to address the 43 bishops, including Presiding Bishop Katharine Jefferts Schori, and the Rev. Gay Clark Jennings, House of Deputies president and the Eucharist’s presider, seated behind her on the dais. The response was enthusiastic nodding all around.

“Episcopal Youth, it’s time for you to bring it,” said Spellers, turning back to the congregation.

“We need you to tell us what it’s like to live in a topsy-turvy world where people connect and learn and love across every kind of boundary,” she said. “We need you to help us navigate a confusing world where Christianity isn’t on top.”

Video and the text of Spellers’ sermon is here.

The rousing service featured Live Hymnal, whose music had everyone from bishops to young people singing harmony, swaying, clapping, dancing (at one point there was even a conga line weaving along the floor of the sports arena where the Eucharist was celebrated) and waving their lighted smartphones aloft. The entrance rite included representatives from each attending diocese bearing handmade diocesan EYE banners. 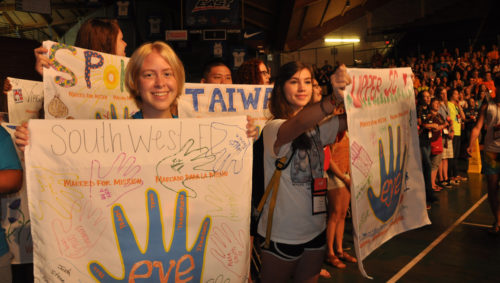 Representatives of each of the 86 Episcopal Church dioceses that sent people to the July 9-13 process into the EYE14 Opening Eucharist July 10 at the sports arena on the campus of Villanova University near Philadelphia, Pennsylvania. Photo: Mary Frances Schjonberg/Episcopal News Service

Some 786 youth in grades 9-12 during the 2013-2014 academic year and 263 adult leaders began gathering July 9 here on the campus of Villanova University near Philadelphia, Pennsylvania, for EYE14, which runs until July 13. The triennial gathering is the second largest in the Episcopal Church after General Convention.

They will spend time attempting to discern how the Holy Spirit has marked them for mission and how they might engage in the work of the Anglican Communion’s Five Marks of Mission, which have been described as a practical and memorable checklist for mission work. 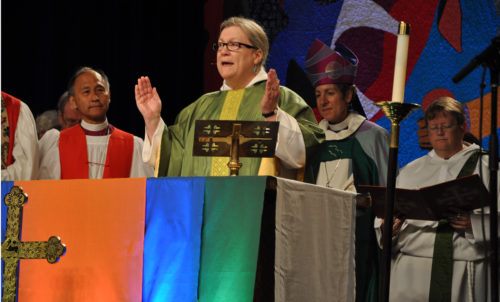 Spellers summoned them in their discernment to the roles of evangelist and missionary. She told the congregation about her spending her youth in Knoxville, Tennessee, “running from the Christians” who epitomized “intolerance … hellfire and judgment.”

“God, I wish I’d known about young people like you and a church like this,” said Spellers, who was baptized at 28. “I wish somebody had engaged me in genuine conversation about God, not to tell me all the answers or save me from hell, but so we could wonder and wrestle and love God and love God’s world.

“On behalf of all the young people wandering today” Spellers called on the young people to “share the story of the God you have met in this church. Find your voice, feel that love, and then spread it around.”

She told them not to wait for other, older church leaders. “You can bear Christ’s healing. You can speak his truth. You can share his love,” she said. “Your peers need it from you. Your church needs it from you.”

Members of EYE14 come from 86 dioceses of the Episcopal Church, including international members from the dioceses of the Dominican Republic, Honduras and Taiwan will spend their days here immersed in music, Scripture, worship and fellowship.
“May the fun and the prayer and the songs and the community you share in these days be like rocket fuel in your tank, propelling you out to be the missionaries you are,” Spellers said in what she called her commissioning of the congregation. “Share good news with the communities around you. Teach and lead this lovely old Episcopal Church into places that terrify us.”

EYE14’s shape and scope
During the rest of July 10, participants will spend time in the first two of four workshop sessions (the final two sessions are set for July 13). Topics range from a chance to “grill the presiding bishop” to Christian Tai Chi, forgiveness, ways to challenge domestic poverty, “confirmation in the 21st Century,” “rooted but relevant liturgy,” how to share one’s faith story and “Irish Dancing: Identity and Culture in Movement.”

Then it is back to the present at another iconic Philly venue for an iconic meal: A Philly cheesesteak picnic on the Rocky Steps of the Philadelphia Museum of Art.

EYE returns to Villanova for “Celebration of Diversity and Call to Equality: A Service of Evening Prayer” led by Presiding Bishop Katharine Jefferts Schori, who will also preach.

The next day, July 12, the Rev. Becca Stevens, founder of the Community Magdalene’s Thistle Farms, will lead a plenary gathering, followed by two more workshop sessions. That evening Diocese of North Carolina Bishop Michael Curry will preach and Jefferts Schori will preside at the event’s closing Eucharist, “Sent by the Spirit.”

Following EYE14, more than 300 are staying over in Philadelphia to engage mission in the field through 3 Days of Urban Mission. The majority of 3 Days of Urban Mission volunteers will lodge at the University of Pennsylvania in inner-city Philadelphia. About 60 additional volunteers will be housed at the Episcopal Mission Center, managed by the Diocese of Pennsylvania. A map of the mission sites is here.

The youth of the Episcopal Church have been gathering nearly every three years since the early 1980s. While preparing for the third EYE in July 1987 in San Antonio, Texas, the Diocesan Press Service, ENS’ predecessor, reported that “those involved in the two previous events have said that if the past is indication, ‘the energy, excitement and pure Christian Joy experienced at this gathering will inspire individuals and enliven parishes back home for a long time to come.’” The same could no doubt be said for every EYE gathering since up to and including the 2014 event.

Keeping an eye on EYE
People who are not on the Villanova campus can follow the progress of EYE14 live streaming of these sessions: