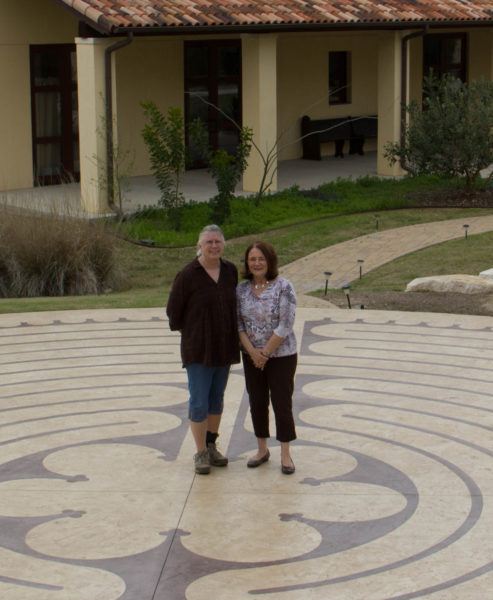 [Diocese of West Texas’ Church News] St. Mark’s Episcopal Church in San Marcos, Diocese of West Texas, sits at the base of a gentle embankment dappled in a profusion of bluebonnets and dotted by shady live oak trees. The sanctuary is lined with soaring windows as though nature itself is invited to join the services while a sprawling labyrinth seemingly emerges organically from a hillside to engage seekers on their spiritual quests.

“You get a sense of creation when you’re here,” said St. Mark’s rector, the Rev. Benjamin H. Nelson III.

“Here” is on the eastern edge of the rolling Texas Hill Country, along an elongated geological escarpment known as the Balcones Fault and atop the environmentally sensitive Edward’s Aquifer recharge zone. And “here,” at St. Mark’s, its Environmental Stewardship Committee is engaged to raise congregational and community awareness, appreciation and preservation of the natural treasure that encompasses their surroundings.

“That’s part of the reason why this group is so active. We’re reminded of nature every Sunday,” Nelson said. “There are gardens all around us, wildlife, birds, flora and fauna all over the place. It’s a cool worship space for us.”

The committee, now with about a dozen members, formed a decade ago, primarily to explore the interweaving of the natural environment with the mission of the Episcopal Church. One of the original members, Larry Hanson, continues to be an active member.

Initially, its work focused on recycling but that emphasis has mushroomed into a myriad of activities, ranging from crafting homemade Christmas gifts to encourage reusing and recycling, to the regularly scheduled sale of environmentally friendly coffee. The group also developed an Advent meditation booklet consisting of meditations and prayers based on daily scripture readings that connect nature to God and creation written by members of the committee

“The meditations are pretty successful,” Nelson said. “We print up a couple of hundred and they all disappear. It gives the committee a chance to talk about the environment and brings in people who may not normally come in contact with this.”

And proceeds from the periodic sale of coffee – fair traded, locally roasted, organically and shade grown – are split between the Episcopal Relief & Development fund and local environmental causes.

Organized in 1874, St. Mark’s moved to its 25-acre campus in 2010 and into a sanctuary that, as Nelson describes, is “wide open to creation.” A portion of the credit for the design and placement of the building goes to the efforts of Sarah Carlisle, Florence Dodington and Susan Hanson, master naturalists and gardeners on the committee, and an array of other volunteers who researched and provided recommendations for sustainable construction, design, landscaping and even its physical placement and alignment to the sun. 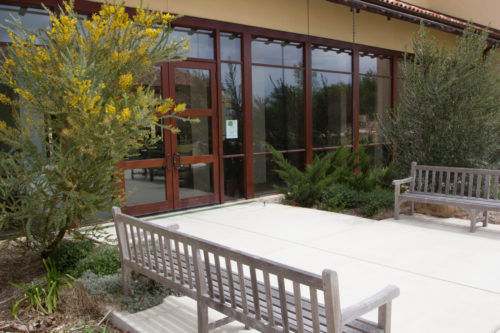 St. Mark’s Episcopal Church is lined with soaring windows that envelop the sanctuary in nature.

Before moving into the new church, the committee also organized a mulching and watering campaign to preserve the sprawling liveoak trees when Texas was struck by a severe drought, said Ann Walsh, co-chair of the committee. Many members of the congregation joined in with the committee to tackle this challenge.

“In the two years I’ve been here they’ve not only incorporated projects that are really cool and innovative but they also focus on formation of people,” with the idea that “this creation we live in is a gift from God and it is up to us to partner with God to take care of it,” Nelson said.

“We feel like we keep having activities to keep people thinking about it,’ said co-chair Margo Case. “We try to educate people about why we’re sponsoring a particular event. We’re very careful not to politicize any of this because it’s not a political cause. It’s a taking care of creation cause.”

Nelson has encouraged their efforts by instituting periodic Rogation services. The services are designed to “make us aware of God in creation and to get them connected to an old tradition of the church. It’s so Episcopalian and Anglican.”

For Nelson, environmental stewardship “kind of gets back to our roots. We’ve always been a people who were deeply connected to creation. All of our great stories in scripture – the emergence of our self through this idea that we were created in the image and likeness of God and God created this world and it was very good. That’s who we are, so scripturally it’s rekindling and retelling that story in a way that connects to wherever we are in our life.”

Nelson was selected as rector of St. Mark’s in 2012. By coincidence, his doctoral thesis happened to concern the environment – “the spiritually of water, combined with some Hawaiian traditional values and the language of the Prayer Book and how encounters with creation can enhance, inform and shape our life in Christ.”

“I think that when the rancher, the tree hugger, the oilman, the developer, when they sit down and talk about their spiritual values, you can sometimes get through the differences to a place where they can start talking about caring for the earth,” he said. “Their goals may not be the same but the values can be, and that can be a language of commonality, especially if they are faithful people.”

To encourage other churches to undertake environmental stewardship, the committee hosted the Diocese Ecological Stewardship booth at the 2014 Diocesan Council in San Marcos. “We were trying to connect with people at other churches,” Walsh said. “To see if we could get some people who were interested and maybe we could help mentor other churches in starting up their own committees.”

When she talked to visitors at their booth, Walsh asked if they had people who worked on the grounds of their church. If they did, “I said you have environmental stewardship but you haven’t thought of calling it that. We’re trying to get people to see themselves as environmental stewards.”

Case and Walsh each had their own reasons for getting involved in environmental stewardship.

“One of the biggest steps for me is trying to get people to see the connection between taking care of the environmental, God and our spiritual world,” Case said. “It satisfies my need for a practical application of my faith.”

Walsh’s involvement grew out of a desire to find a way and an interest to become more involved in the life of the church. “It was something I could connect with. I love being outside, I’m an avid birder and gardener. For me, it was a perfect fit.”

And for Nelson, environmental stewardship has rekindled the gift of God in him so that he doesn’t “take things for granted in creation.”

The next horizon for the committee is to involve younger children and families in caring for the environment. Walsh would like to see the natural playground, now in the planning stages, to “include some space where you can gather families together and get them actively participating in environmental stewardship activities.”

Case and Walsh invite other churches interested in embarking on their own environmental stewardship work to contact them for help as mentors. “We could tell them here’s what we’ve been doing and this is how we got started,” Walsh said. “Getting people to more actively organize themselves is something I would wish to see.”