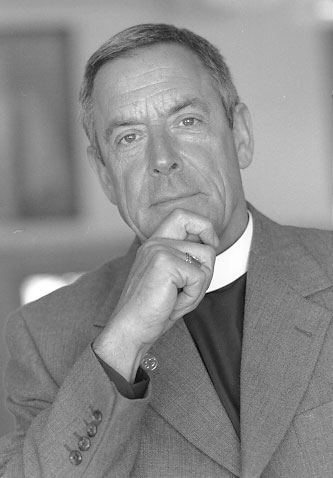 Surrounded by family and friends, the Venerable Anthony Turney died peacefully on July 4, 2014 at Coming Home Hospice in San Francisco following three years living with cancer. He was 76 years old.  His death came on the 38th anniversary of his becoming a United States citizen.

Throughout his esteemed and varied career, and most recently as Archdeacon for the Arts at San Francisco’s Grace Cathedral, Anthony epitomized what it was to be a servant minister, both in the church and in the wider community. He was a profoundly gifted man, a lover of the arts, a gardener, a Brit, and a committed leader in non-profit endeavors. His career included positions as Deputy Chairman of the National Endowment for the Arts in Washington, DC; Executive Director of the Dance Theater of Harlem; Administrative Director of the San Francisco Opera; and CEO of the NAMES Project Foundation. He was ordained to the Episcopal diaconate in 1996 and continued to serve through his work at Grace Cathedral and in the Diocese of California.

Anthony was born in Sutton, England, on December 23, 1937, second oldest of three children within a family that soon broke up. His first years were spent in a Church of England children’s home for ‘waifs and strays,’ although he claimed he was never certain which of those he truly was. At the age of four, he was adopted by the Turney family who lived in Aylesbury, about 40 miles northeast of London. That same year marked the beginning of the Blitz, thus defining his childhood in wartime England.  In his mid teens, he served as a police cadet and thought of joining the force. Then at the age of 17, Anthony joined the Grenadier Guards, an infantry regiment of the British Army and the most senior regiment of the Guards Division. Besides serving in the Guards’ iconic ceremonial duties outside of Buckingham Palace, Anthony also saw distinguished service under fire during the Suez Crisis. Afterwards, he spent his 20s at various jobs in London, “lost in the wilderness,” as he put it.

Anthony spoke often of the defining moments in his life, and the most significant of these was his move to the United States in 1968. He jumped right in to the non-profit world, discovering his talent for leadership in the arts. First establishing himself in New York City, Anthony made a name for himself as an independent event producer, especially proud to have once presented Buckminster Fuller at Carnegie Hall.  Over the years he also lived in St. Louis, Atlanta, Washington, DC, and finally, San Francisco. He became a United States citizen on July 4, 1976, the bicentennial of his adopted country.

With the onset of the HIV/AIDS epidemic in the 1980s, Anthony’s life changed course once again. In mid 1991, he quit his work to care for his partner, James Brumbaugh, who was dying from AIDS-related complications. It was a devastating loss. In 1992, after completing Jimmy’s AIDS Memorial quilt panel, he asked, “What would you have me do now, God?” Within months, he moved permanently to San Francisco, was appointed CEO of the NAMES Project Foundation, and after only three years, would bring more than 42,000 panels of the Quilt to Washington, DC for display on the National Mall. It was viewed by 1.2 million people.

In 1996, Anthony was appointed to the San Francisco Arts Commission. In 2000, he was a consultant to the United States Agency for International Development, assisting in the agency’s efforts to partner with faith-based organizations in responding to the HIV/AIDS pandemic in Africa.

In San Francisco, Anthony found his spiritual home at Grace Cathedral, where he served as parishioner, as Canon for Development, and then, through his vocational calling, as clergy. Several years before his retirement, Anthony was appointed Archdeacon of the Diocese of California, as such serving the whole community of deacons, administratively and pastorally, and was very much a person on whom the Bishop relied centrally and heavily.  Afterwards, Anthony was named Archdeacon for the Arts at Grace Cathedral. He also served as Chaplain to the Dean’s Search Committee for Grace Cathedral. As an openly gay member of the clergy and a vocal advocate for marriage equality and other social justice issues, Anthony was a tireless champion of the LGBT community. An energetic volunteer and traveler, Anthony spent a month walking across Spain along the Camino de Santiago and successfully biked, three times, from San Francisco to Los Angeles as part of the AIDS LifeCycle. After Hurricane Katrina, he volunteered with a group from Grace Cathedral to assist in rebuilding a home for a young woman who had lost her home.

As accomplished as he was, his friends and family will remember Anthony most fondly for his commanding personality. He filled a room with grace and dignity – and then used his keen humor to destroy any remaining decorum. Anthony was an extraordinary friend and companion, always caring for those around him. He listened intensely and valued each person who came into his life. His friends and colleagues were blessed by his giving nature. Those who loved and admired Anthony continue to do so with passion and loyalty.

A final gift that Anthony bestowed on his friends and family was the way in which he lived out his dying. He did so with integrity, dignity and humor. Those who witnessed his journey learned with him. Dying often reveals a great many things about a person, especially those who are in the public arena. We watched him from a distance as he made his private journey, and, when invited, we walked part of that pilgrimage alongside him. We are grateful for both the public and the private blessings.

Anthony is survived by his San Francisco, St. Louis and Los Angeles family; his Episcopal Church friends and colleagues; beloved friends from across the world; his canine companion, Drew; and his newly found – and greatly loved – biological family in England and in Canada.  His, truly, was a life well lived: in love, friendship and grace.

In lieu of flowers, donations in Anthony’s memory may be made to one of the following: The Sacred Dying Foundation, The Rainbow Honor Walk, the Ghiberti Foundation, the arts and culture foundation at Grace Cathedral or the San Francisco Opera Archive.

A funeral and celebration of Anthony’s life will be held at San Francisco’s Grace Cathedral (1100 California Street) on Monday, July 14 at 11am. Anthony’s body in closed coffin will lay in the Cathedral’s AIDS Interfaith Chapel beginning at 7am for all those wishing to pay their respects prior to the funeral.