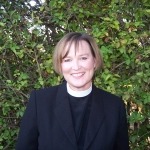 The Episcopal Network for Stewardship is a network of individuals working in congregations and on the diocesan level to train, educate, nurture and support efforts to advance a culture of generosity and faithful giving. TENS is supported through diocesan memberships which entitle every congregation within the member diocese to access a stewardship narrative series as well as other resources, especially around annual campaigns. TENS hosts an annual conference at various sites throughout the U.S. During Johnston’s service as Executive Director, the plenary speakers and one track of workshops were also webcast.

“Laurel birthed the stewardship narrative series: Blessed to be a Blessing, Flourishing in Faith, and Walking the Way, which have proved enormously helpful to local congregations.   She was also the driving force behind the development of the webcast. The whole Church owes her a great big thank you for her ministry in the generosity movement,” said The Rev. Angela Emerson, member of the Board of Directors, in making the announcement at the annual conference in Atlanta, Ga., June 7, 2014.

In a letter to Bishops, other constituents, partners and members, Johnston expressed an optimistic outlook for the future of TENS pointing both to programmatic developments, a dramatic increase in memberships, and financial soundness. “I cannot be more proud of the work that we have collectively done together to create a model of equipping stewardship ministry teams.”

Johnston will take advantage of a discernment leave to determine her next step.