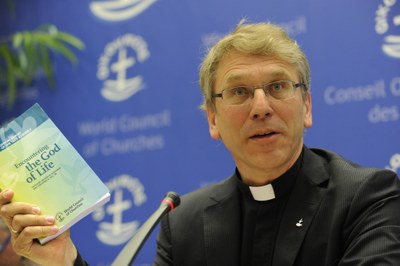 [World Council of Churches press release] The Rev. Olav Fykse Tveit was appointed to a second five-year term as general secretary of the World Council of Churches (WCC) on 3 July, during the WCC Central Committee meeting in Geneva, Switzerland. The 53-year-old theologian and pastor from the Church of Norway has served as general secretary since January 2010.

Tveit called his appointment a “great privilege” and a “continuation of a meaningful journey”. He said that the last five years have been the “most blessed years, offering opportunities, challenges and accomplishments in his work with the churches”.

“This decision is heartening. I feel grateful and motivated,” he said.

“A shared faith in what the WCC can accomplish in its quest for Christian unity, justice and peace in the world, a concern that lies at the heart of the ecumenical movement, is immensely inspiring for me as I continue working with the churches.”

WCC Central Committee moderator Dr Agnes Abuom said, “We, as members of the Central Committee, are delighted at the appointment of Rev. Dr Olav Fykse Tveit. The Central Committee has strongly affirmed the leadership gifts which he brings to his role. We look forward with a high degree of confidence to the next five years of working together with Rev. Olav and all the WCC staff.”

Tveit has played an active role in the past two decades in strengthening global church relations, while contributing to churches’ work for the cause of justice and peace. Before being appointed as the WCC general secretary, Tveit previously served as general secretary of the Church of Norway Council on Ecumenical and International Relations, as well as being a member of the WCC’s Faith and Order Plenary Commission and also the board of directors and executive committee of the Christian Council of Norway.

The WCC is a fellowship of 345 churches from around the world.

The World Council of Churches promotes Christian unity in faith, witness and service for a just and peaceful world. An ecumenical fellowship of churches founded in 1948, by the end of 2013 the WCC had 345 member churches representing more than 500 million Christians from Protestant, Orthodox, Anglican and other traditions in over 140 countries. The WCC works cooperatively with the Roman Catholic Church. The WCC general secretary is the Rev. Dr Olav Fykse Tveit, from the [Lutheran] Church of Norway.