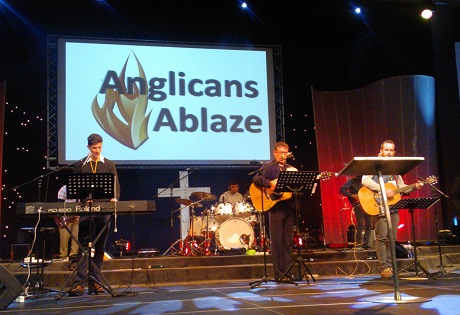 [Anglican Communion News Service] About 2000 Christians from Southern Africa and beyond are in Johannesburg for one of the continent’s most popular Christian gatherings: Anglicans Ablaze.

Day one was characterized by lively praise and worship songs led by Bishop Martin Breytenbach of the Diocese of St. Mark the Evangelist (Limpopo Province of the Anglican Church of Southern Africa), backed by an energetic “blazing band.”

The bishop told attendees: “People are spiritually thirsty and desperate for a living God” and he encouraged participants to be “engaged and meet God despite the different styles of praise and worship” at the conference.

The Anglican-run conference, with the theme Hope is Rising, runs from July 2-5, and will address various topics ranging from re-imagining mission, the environment, social justice, discipleship and leadership, among many others. Speakers have been drawn from various backgrounds, denominations and countries mostly from Africa.

Hope, an anchor for the soul
‘Hope’ was a common thread to many of the presentations throughout the first day. “Christian hope is not wishful thinking,” one speaker said, “but our confident expectation in Christ.”

In his charge, Archbishop Thabo Makgoba, primate of the Anglican Church of Southern Africa (ACSA), drew extensively from Scripture and various theologians on the meaning and the need for hope in the church.

“Hope is the belief that we’re called and invited to be ready to respond to the love of God,” he said. “Anglicans should be witnesses with a difference, and nothing, not even death shall separate us from the love of God.”

Makgoba addressed many other issues within the church and the country. He spoke of “the need to care for the environment” and the current efforts to organize local clean-up campaigns and even lobby government for an eco-conference. He also bemoaned the disparities that exist between the rich and the poor, the employers and the employees.

“Theological education is a must for Southern Africa and equips us to embody and proclaim the message of God’s redemptive hope. Education boosts the levels of trust among Christians,” he said. “Unfortunately distrust is taking over in South Africa due to lack of transparency in the nation and therefore, the church needs to act to bring about a renaissance of trust.”

Re-imagining mission
Steve Maina is a charismatic Anglican priest who heads up CMS in New Zealand. He gave a rousing speech on “re-imaging mission” in 21st century Africa. He said, “As Anglicans we sometimes get caught up in the debates and forget what our core essence is. The Kingdom of God is not only about the seed or weed, but the whole story.”

He added, “It’s about the small seed becoming the big tree and therefore Anglicans should not despise small beginnings. Breakthroughs don’t always happen at the center but at the fringes.” He encouraged Christians not to be scared to be in “obscure places because that’s where the renewal and expansion of the church is happening.”

“It’s time for Africa to evangelize the world,” he proclaimed. There is need for quality and depth in churches and discipleship. Boundaries should be broken to re-imagine mission and share the gospel of Christ.”

However he explained that African Anglicans need a plan to successfully evangelize the world. He explained the various opportunities that the church can take advantage of in order to effectively evangelize.

“Children present a wonderful opportunity for sharing the Gospel with others,” he said. He wondered why the African church had ignored Christians in diaspora. “Those should be commissioned and prayed for,” he said.

He explained that this missionary model is not capital intensive since the people are already out there and hence the church does not need to spend to take them there.

She related social justice to the teaching in the Gospel of Matthew. “We need to care enough for our neighbors as Jesus taught us,” she said. “We need to build relationships and break bondages of injustice.”

Nyagi emphasized that the church needs to break the bonds of injustice and set people free. “The church should break the bondages of dehumanizing poverty and let justice roll while doing away with oppression,” she said.

In conclusion, she warned: “However, giving aid only is like trying to be God and trying to fix everything in the world without understanding the source of the problems.”

The Anglicans Ablaze conference has been organized by Growing the Church, the province’s growth institute. It is a follow up to a similar conference held in 2012 which saw the participation of about 1,400 Christians. This year, Archbishop of Canterbury Justin Welby, spiritual leader of the worldwide Anglican Communion, will be the keynote speaker.