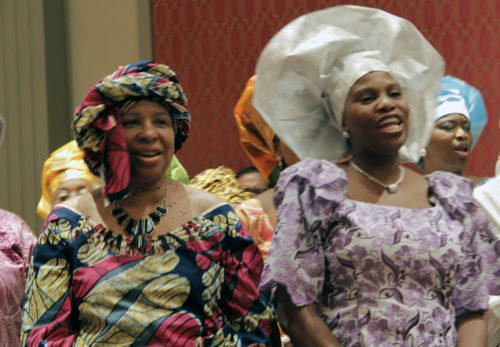 The Gospel Choir of the African Episcopal Church of St. Thomas in Philadelphia, Pennsylvania, performed during the June 29 opening Eucharist of the Union of Black Episcopalians 2014 Annual Conference. Photo: Lynette Wilson/ENS

[Episcopal News Service – Atlantic City, New Jersey] It’s a “family reunion” like no other: 250 adults, young and older, are gathered at the Golden Nugget Hotel and Casino for 46th annual meeting and conference of the Union of Black Episcopalians, a confederation of more than 35 chapters and groups in the U.S. and the Caribbean, with members in Canada, Africa and Latin America.

The conference brings together African American Episcopalians and those from the African and Caribbean diaspora for five days of worship, workshops, addresses and fellowship.

“Some of our constituents belong to historically black churches, others come from multicultural churches, and others come from the Midwest and the West where there are fewer black Episcopalians, so this is one place where they come together,” said Annette L. Buchanan, UBE national president, and a member of St. Augustine’s Church in Asbury Park, New Jersey.

“Not only is it intergenerational, but it is across the African diaspora; we understand that we are one community and that we can learn from each other.”

True to the conference’s theme “Renewing our Commitment to the Work and Ministry of Social Justice” the June 29 to July 3 assembly includes workshops such as “Eliminating Racism and Renewing Our Commitment to Each Other, to Church and to Community” and “Awake, Arise: Blueprint For A Vibrant Congregation.”

“We like to talk a good story about being open and welcoming places … but were not always so good about inviting people in and having a place for people who are different than we are,” said the Rev. Canon Sandye Wilson, rector of St. Andrew and Holy Communion Episcopal Church in South Orange, New Jersey, in a sermon delivered during the June 29 opening Eucharist.

“And the reality is that we’ve got some internal work do so that we can do the work of the Gospel.”

Wilson referred to the song “God Has Work for Us to Do”:

“So my friends, if there is anything I would say to you tonight as we begin to recommit ourselves to social justice is that God has work for us to do,” said Wilson, adding that it’s first the hard work of  “looking in the mirror and recognizing that we’ve been created in the image of God.”

“The beauty of the body of Christ gathered as the church is that there is space for all parts of the body to thrive and when those parts are working together, some amazing things happen,” she said.

The design of the multigenerational conference includes:

“We wanted to make sure that those who paved the way, our seniors, that they are here and we honor them, … and they serve as role models to the middle tier and youth and young adults,” said Buchanan. “We have young people who because they have been to the conferences strive to become … clergy and leaders within the church because they … have been given leadership roles as well.” 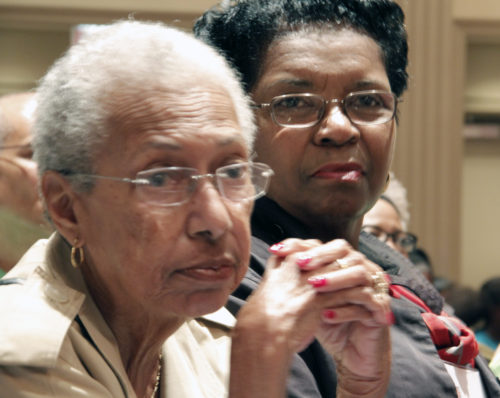 Bishop Barbara Harris, the first woman bishop in the Episcopal Church, and Diane Pollard, a long-time General Convention deputy from the Diocese of New York and a trustee of the Church Pension Fund, during the opening Eucharist of the Union of Black Episcopalians 2014 Annual Conference. Photo: Lynette Wilson/ENS

UBE traces its history back to Absalom Jones, the first African-American priest. For more than 200 years, the black leadership has led the fight against racism in the Episcopal Church and UBE continues to work collaboratively as an advocate for social and economic justice.

Recommitting to social justice serves as a reminder for members not to “rest on their laurels in terms of whatever gains we’ve made,” said Buchanan.  The theme also commemorates the 50th anniversary of the advent of the civil rights movement, and the parallel struggle for rights in church.

“The struggle is still ahead,” said Buchanan.

In regard to the church, one thing UBE is concerned about is the vitality of its more than 330 historically black congregations, a large percentage of which, Buchanan said, “are not healthy.”

It was something the Rev. Canon Edward Rodman, the John Seeley Stone professor of pastoral theology and urban ministry at Episcopal Divinity School, pointed out during his workshop “Black Folk and the History of the Episcopal Church: A 21st Century Perspective”: Churches that are not self-sufficient and that don’t pay their diocesan assessment lose their voice.

In her June 30 keynote address, Lorraine C. Miller, who recently finished a seven-month term as interim president and CEO of the NAACP, talked about social justice and how churches can work together and with other nongovernment organizations to initiate change in their communities.

“The cause of social justice is needed more than ever,” said Miller, who prior to serving the NAACP was the 35th clerk to the U.S. House of Representatives, the third woman and first African American to serve in the position.

Miller outlined three issues to consider as UBE evaluates its social justice engagement strategy: the need for greater civic participation, particularly to address the assault in recent years on voter rights; the scourge of HIV and AIDS that disproportionately affects the African American population in the United States; and community efforts to engage minority men between the ages of 18 and 25, a group that is disproportionately unemployed and overrepresented in the criminal justice system.

Miller remembered a song she sang in church as a child growing up in Fort Worth, Texas – “Brighten the Corner Where You Are” – and how its meaning wasn’t clear to her until later in life.

“I had no real idea of what that meant until I became an adult … it means I may not individually be able to change the world but I can certainly make a difference in my sphere of influence, in my home and my neighborhood, I can make a difference, so what we do with HIV/AIDS, we do with young men, we do with voter participation it’s up to us, we are, you are the leaders,” said Miller.

“You are sitting in this room because you are a leader and God has given you the wisdom and power to know what to do.”

Anita George, who is renowned in the Episcopal Church for racial justice work, conducted a workshop, “Eliminating Racism and Renewing Our Commitment to Each Other, the Church and Our Community” on June 30 during the Union of Black Episcopalians 2014 Annual Conference. Photo: Lynette Wilson/ENS

What today is the UBE was founded on Feb. 8, 1968, at St. Philip’s Church in New York by 17 black priests as the Union of Black Clergy and Laity. Its goal was to remove racism from the church and society and to stimulate the growth of black membership; another of UBE’s concerns, said Buchanan, is being intentional about raising up leaders and clergy leadership “in our churches, identifying young people who have that gift and helping them to discern that.”

The Rev. Canon Nan Peete, who is retired but serves as priest-in-charge of Church of Our Savior in Washington, D.C., echoed Buchanan: “UBE has always prided itself on including and welcoming young people. … They have a stake in the future if they have a stake in the present. It’s up to the elders to let them know they have value now and in the future.”

The conference’s focus on social justice from an historical perspective and how it affects youth and young adults today is one way to prepare new leaders, said Alexizendria “Zena” Link, UBE’s national youth adviser.

As a member of St. George’s Episcopal Church in Hempstead, New York, and president of the church’s youth group, Morenike Oyebode, 16, attended the conference to participate in the worship services, but also she was looking for ways to get more young people involved in the church.

“Here at the conference we are learning to become one and work together as kids and become part of the church because many times outside the church kids don’t really know how to be involved,” she said. “I want to find new ways to keep the youth involved in our church because many times we don’t have youth in our church. Our youth are like 15 kids and that’s it, so I would like to bring more people to our church.”

The outcome of the conference for those who’ve been around a while, Buchanan said, is “a personal recommitment to the work of racial and social justice in their own vineyard locally.”

“You’re in the vineyard, you’re working hard, and then you are like, ‘Why am I doing this? I’m not seeing any progress,’ but you come back together with the preaching with the music, the workshops, and it kind of recharges you, like when you are at the end of the service and sent out again into the world to the work, that’s what this is, the sending out. “

– Lynette Wilson is an editor/reporter for the Episcopal News Service.