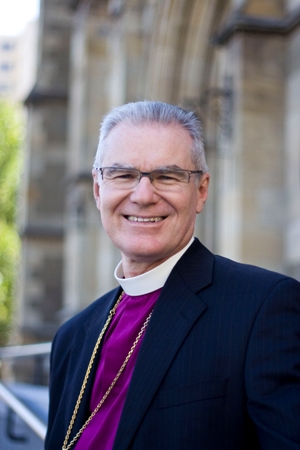 [Sydney Anglicans] The Archbishop of Melbourne, Philip Freier, has been elected the next primate of the Anglican Church of Australia.

The primatial electors met at St. Peter’s Cathedral in Adelaide on June 28, a day before the start of the General Synod.

The post of primate is a ceremonial role, without significant constitutional authority.

After several rounds of voting, there was strong support for both Freier and Sydney Archbishop Glenn Davies.

In the final ballot, Freier gained the requisite majority among bishops, clergy and laity.

He succeeds the Archbishop of Brisbane, Phillip Aspinall, who has been primate since 2005.

After the vote, Davies said “The Anglican Church of Australia is united by a common constitution and a common cause to proclaim Christ. I congratulate Archbishop Freier and look forward to working with him as we bring the good news of Jesus to the nation.”

Freier believes that sustaining a national presence and strengthening the church’s contribution to rural communities are among the most important challenges facing the Anglican Church of Australia.

“I look forward to the opportunity of working with the church around the country. The church across its parishes, schools and service agencies makes a powerful contribution to Australian society,” Freier said.

Freier, 59, has been Archbishop of Melbourne since December 2006.