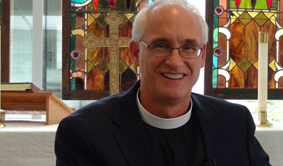 [Episcopal Diocese of Texas] The Rev. Dr. Clay Lein has accepted the call as the fifth rector of St. John the Divine, Houston, according to a statement released by their search committee this week. Lein is the founding rector of St. Philip’s Episcopal Church in Frisco, Texas, where he has grown the congregation to more than 1400 members since 2002. His first Sunday at St. John the Divine will be November 23, 2014.

“It has become clear to us that God has laid a strong foundation of faith [at St. John the Divine] and that [the congregation] is poised for a real movement of God’s spirit,” Lein said. “I believe that the best really is yet to be, and I’m grateful that Jill and I get to be part of it.”

Lein previously served as executive pastor at Christ Episcopal Church in Plano, Texas and associate pastor at All Saints Episcopal Church in Pawley’s Island, South Carolina. He received his Master of Divinity degree from Trinity School for Ministry and recently completed his Doctor of Ministry at Gordon-Conwell in Charlotte, North Carolina.  He also received a BS in electrical engineering from the University of Missouri and an MBA from Arizona State University.  Prior to his ordination, Lein was a product-marketing engineer with Intel Corporation. He is the author of Ordinary Faith, published in 2008, about “finding real faith in ordinary life.” Clay and his wife, Jill, have three grown children: Jennifer, John and Joshua.

“We believe that we have called the priest that God has anointed to lead SJD into the next phase of our life together,” wrote the search committee in a letter to the congregation.

St. John the Divine is a congregation of 4000 active members in Houston’s River Oaks neighborhood. The Rev. Larry Hall retired in April after more than 32 years as rector. See video of Lein’s greeting to St. John the Divine below: