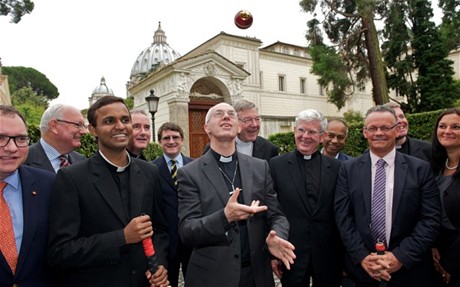 [Lambeth Palace] Anglican and Roman Catholic First XIs will face each other in Canterbury on Sept. 19 in a historic match to raise awareness of slavery and human trafficking.

Details of a historic cricket match between Anglicans and Roman Catholics to raise awareness of modern slavery and human trafficking have been announced today.

The Twenty20 match, which will be played at Kent County Cricket Club in the shadow of Canterbury Cathedral on Sept. 19 at 4 p.m., will raise funds for the Global Freedom Network, the joint Anglican-Roman Catholic anti-trafficking initiative launched in March.

Entrance will be free but there will be a bucket collection during the match, which will be followed by a gala dinner to raise further funds.

The match will mark the culmination of the St. Peter’s Cricket Club ‘Tour of Light’ initiative, and follows a challenge laid down by the club’s honorary president Cardinal Gianfranco Ravasi to Archbishop of Canterbury Justin Welby.

Welby said: “I was delighted to meet members of the St. Peter’s Cricket Club during a recent visit to Rome, and am greatly looking forward to welcoming them to Canterbury in September for what will be an historic occasion. I would like to express particular thanks to Kent County Cricket Club for so generously offering the use of their ground, and to those who are working hard to ensure the St Peter’s team enjoy a memorable tour. I also pray that the match will draw attention to the very serious problem of modern slavery and human trafficking, which our two churches are working closely together to combat through the work of the Global Freedom Network.”

Cardinal Gianfranco Ravasi, president of the Pontifical Council for Culture, said: “’If you want to arrive first, run alone. If you want to go far, walk together.’ For this sporting initiative I recall this Kenyan proverb, as it states so simply our need for teamwork, and with clear reference to the charitable aspect chosen, namely the issue of human trafficking, a plague which hurts most those who are left alone and abandoned. In our culture of massive movement of peoples, sport challenges us to examine not just how hospitable we are, as individual athletes, but also how similar we are, for as Jean Giraudoux affirms, “sport is the real esperanto of the peoples”. Look at the great success of the World Cup in Brazil! We do well to recall this in our pastoral work!”

Read more about the match – including details of the squads – on the Pontifical Council for Culture website.