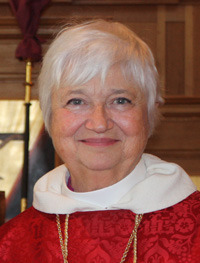 Roskam has lived in the Diocese of Los Angeles since her retirement in 2012. She has frequently assisted Bishop J. Jon Bruno and Bishops Suffragan Diane Jardine Bruce and Mary Glasspool with pastoral visits to congregations.

“I feel blessed to be called to St James-in-the-City with its rich diversity, its compassionate outreach, its commitment to education, and its excellence in liturgy,” Roskam told The Episcopal News. “I’m so looking forward to this new phase of our ministry together to the glory of God.”

Roskam served as bishop suffragan in New York from January 1996  until January 1, 2012. She was a member of the Anglican Consultative Council for nine of those years and on Executive Council for a six-year term.

“Through the interplay of these three positions, the world of global mission was opened to me in the most unexpected and enriching way” she wrote. “Several global partnerships grew out of relationships that held firm in “the bonds of affection” even through the troubles.”

Roskam helped to found Carpenter’s Kids, a partnership between the Diocese of New York and the Diocese of Central Tanganyika, and now including other dioceses, enables over 7,000 AIDS orphans and other vulnerable children to go to school and have a nutritious breakfast every school day.

She was also a founder of The Global Women’s Fund to support the education of Anglican women, with priority given to those entering seminary, a program that “now has terrific success stories to tell about women, both lay and ordained, in Uganda, Kenya, Tanzania, The Philippines, Haiti and Honduras.,” Roskam writes. “I am so proud of those endeavors and have such affection for the dear friends who labored with me in those particular vineyards, the energetic, entrepreneurial Bishop Mdimi Mhogolo of the Diocese of Central Tanganyika (who sadly died this past May), and Canon Jolly Babirukamu of Uganda, a fellow member of the ACC whose life has been devoted to the empowerment of women in Africa.”

Education  was a strong theme for her episcopate. “We began an initiative called All Our Children, in support of public education. We challenged every congregation to become involved with their local public school and every individual Episcopalian to give 40 hours a year in direct service or advocacy or teacher support.”

Roskam has been an associate of the Society of St. John the Evangelist since 1981. “Now I spend most of my time with my family, especially my husband of 47 years and our 5 year old grandson. I also study Hebrew at American Jewish University and am studying Torah at Valley Beth Shalom in Van Nuys.”