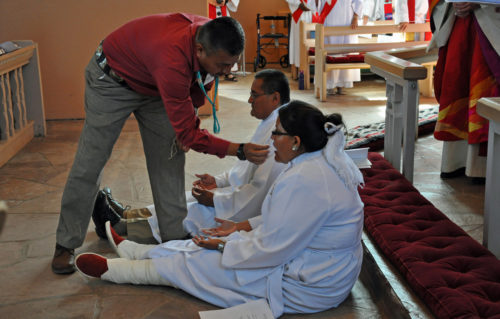 Then during the convocation’s business meeting on June 15 the members elected only Navajos as deputies to the 78th triennial meeting of General Convention, set for June 25-July 3, 2015 in Salt Lake City, Utah. Those deputies are:

“This is believed to be a historic action of the election of an all-Navajo deputation,” Eaton, who was ordained to the transitional diaconate in December and is Bailey’s canon to the ordinary, told Episcopal News Service via e-mail, after the meeting.  “Most certainly to be true in the election of all Navajo clerical deputation.”

Plummer is the daughter of the late Bishop Steven Plummer, who served Navajoland as bishop from 1990 to 1994. Her mother, Catherine Plummer, is a priest at St. Mary’s of the Moonlight Episcopal Church in Oljato, Utah.

When Plummer and Sampson were ordained, they became the latest ordained Navajo leaders that the area has raised up and Bailey has ordained since he became bishop in August 2010. There are eight ordained Navajo and three others are in training.

“Throughout human history, communities have designated some of their members to encourage others to live in ways of peace, order, harmony, truth, and beauty,” said Presiding Bishop Katharine Jefferts Schori in her sermon during the ordinations. “That’s what we are here today to do, to recognize and bless the particular gifts the Creator has given Cathlena and Leon, to call them into the center of this circle to bless them, and to challenge them to keep encouraging the flock in ho’zho’.” 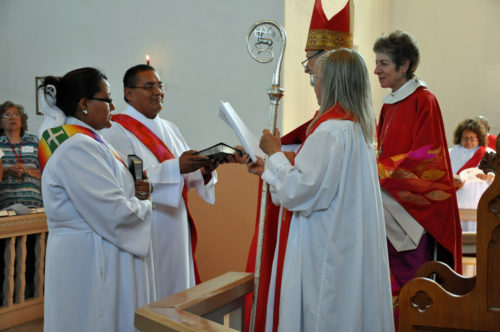 Noting that Navajo believe that Spider Woman’s web can hold people above the waters of the flood, much like Noah’s ark, Jefferts Schori called on Plummer and Sampson to weave their Christ-centered selves into the web of their people to help protect them and “to shake [the web] up when its connections fray or start to break.”

“We ask you to help us pursue those who wander away or lose their connections with that web. We pray that you will know your own connection to that web so deeply that you can remind the lost or forgetful that the Creator loves us more deeply than we can imagine,” she said. “And we promise to bind our own fibers together with yours, that the web may grow in beauty, justice, and peace to rebalance the world. Become weavers of beauty for others, and challenge us to keep expanding the holy web of life in ho’zho’.”

As the ordination service began, Kimball Shorty, who is related to both Plummer and Sampson, purified the Good Shepherd Mission sanctuary and the people in it with cedar smoke. Using feather fan, Shorty spread the smoke to make connection with the Creator and to tell the Creator that the “grandchildren are here.”

[ooyala code=”piam9jbjpfhB7whxj311KrOq1fNsAaSJ” player_id=”d4a5625b85af485eb1fff640076c5be6″]Later a wind that gusted to 40 miles per hour whistled around the church and buffeted the roof as the congregation sang a traditional ordination hymn (Hymn 503 – Come Holy Spirit ­– from The 1982 Hymnal).

Then, Plummer and Sampson rose from the communion rail where they had been kneeling before Bailey, turned and sat down on the floor facing the congregation. Shorty blessed them with corn pollen. Corn, a Navajo staple, is also considered to be a sacred plant given to the Navajo at the beginning of creation.

Beginning with their feet, Shorty also anointed the diaconal candidates’ knees, hands, arms, chests, backs, heads and mouths. The latter done “in order to speak the true word – the right word for them,” he later told Episcopal News Service.

He then led them outside the building, “spun them around” clockwise to greet the elements and brought them back inside for their ordination. “Now they’re whole” and ready for their work, explained Shorty, who attends St. Andrew’s Episcopal Church in Glendale, Arizona.

[ooyala code=”0wc21jbjoK0Co93Yl9KEaO1U0j23HGYn” player_id=”d4a5625b85af485eb1fff640076c5be6″]During a thanksgiving lunch held in the compound’s Thorne Building after the ordinations, Plummer’s mother, Catherine, said the Navajo elements in the service, including a number of hymns in the Navajo language, showed that “that’s who we are: Christian and Navajo.”

“We need to reorganize the church so that it works for us as Navajo Christians in the Episcopal Church in Navajoland,” she added.

At the church’s Executive Council meeting in Phoenix, few days prior to the ordinations, Bailey had told a committee meeting that ordaining Navajo people to ministerial positions is part of the mission’s reorganization and sustainability plan. The ordinations are “an investment; it’s not a short-term solution,” he warned, adding that the mission is in his estimation at least six years away from being ready to call another Navajo as its bishop.

In 1978 the Episcopal Church created the Navajoland Area Mission, also known as the Episcopal Church in Navajoland, out of sections of the dioceses of Rio Grande, Arizona and Utah – areas within and surrounded by the 27,425-square-mile Navajo Nation, as the reservation is known. It encompasses 26,000 square miles over Arizona, New Mexico and Utah.

The Navajo, also known as The Dine’ (The People), is one of the largest Native American Indian tribes in the United States. Between 125,000 and 150,000 Navajo live on the reservation, which is about the size of West Virginia. Many people work in extractive industries, such as oil, uranium and petroleum, but an estimated 50 percent of the population is unemployed and 50 percent lives in extreme poverty. Addiction, domestic abuse and suicide rates are high.

At their convocation in 1987, the Navajo Episcopalians asked for a new level of partnership with the Episcopal Church, including the right to nominate their own bishop. The 1988 General Convention endorsed the request and the Navajos elected Steven Plummer in June 1989. The House of Bishops meeting in Philadelphia that fall ratified the choice, and Plummer was consecrated the first Navajo bishop, and the third Native American bishop, in March 1990. 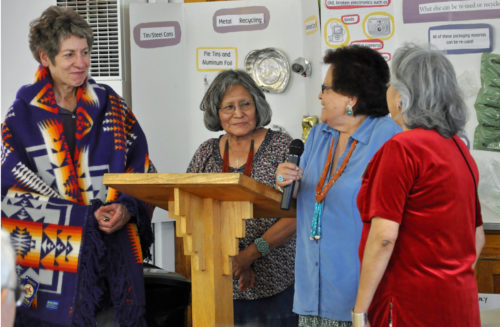 The Episcopal presence in what is now known as the Navajoland Area Mission began close to 100 years prior. In 1894, Episcopalians helped establish mission hospitals, followed by schools and orphanages within Navajo communities. Those mission hospital compounds are the core of the area mission’s three regions today. However, most of the buildings that were built in the late-1800s through the mid-1900s with gifts from East Coast churches fell into disrepair when there was no money for maintenance.

In addition, Bailey and others told council, Navajo members lacked leadership and financial training and thus became dependent upon “outsiders.” And there was a lack of consistency in how Navajo lay and ordained leaders were raised up, he said. Navajoland had one indigenous priest in 2010 when Bailey was elected bishop. Now, there are eight, and Bailey and the area mission are determined to raise up more leaders.